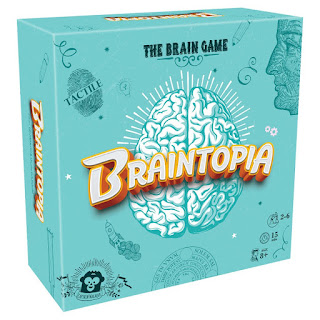 Braintopia is a fast-paced brain bender comprised of eight different challenges testing your mental focus, flexibility, and speed. Up to six players race through a deck of cards, fighting to keep up with the ever-changing mini-games and to each solve the puzzles faster than their opponents. Collect brain tokens by beating a single Tactile challenge or claiming a pair of cards from any of the other seven games: Memory, Maze, Color, Coordination, Duplicates, Frequency, and Reasoning. The first player to four brain tokens wins the game! 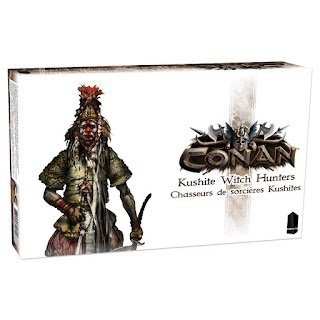 The Overlord gains more of both swords and sorcery with the Kushite Witch Hunters collection for Conan. Its four distinctive miniatures, each of which comes with its corresponding unit tile, allow you to push the heroes to their limits with powerful spells and precision strikes. Sorceror Shubba wields powerful magic. Skilled warriors Shafiah and Ghayoor strike with deadly precision. And Afari makes the heroes pay dearly for their insolence with his deadly counterattacks. Altogether, these units introduce a wide range of new abilities, and their distinctive miniatures immerse you deeper in the game's Hyborian adventures. 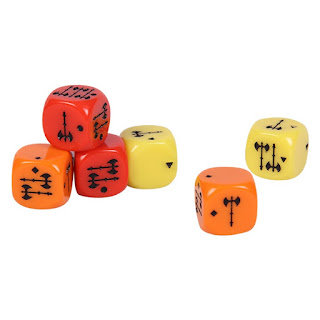 When you find yourself with your back to the wall amid the pulse pounding, asymmetrical battles of the Conan board game, you'll be thankful for the new dice from the Conan Dice Pack! Your adventures may vary wildly from scenario to scenario, but there's always action, and the six custom dice from the Dice Pack (two red, two orange, and two yellow) allow your heroes and Overlord, alike, to attack, counterattack, cast spells, and reload their crossbows faster and with deadlier precision than ever.
Posted by ACD Distribution at 3:45 PM