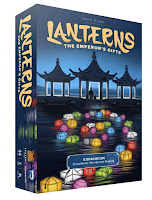 Exclusive to Hobby for the Holiday Season!

Buy 12 or more copies of the Lanterns: The Emperor's Gift's Expansion and receive your product early on November 23, 2016!

Brick and mortar stores only!

Orders must be in by Friday, November 4th, 2016 to qualify for early release 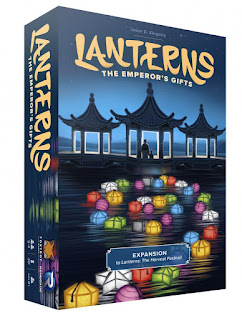 $20.00 SRP
The emperor has declared that pavilions shall be constructed among the lanterns floating on the lake for this year's festival. Place pavilions to earn gifts from the emperor, and redeem those gifts for powerful actions to make this the best harvest festival yet!

In this expansion, designed by Jason D. Kingsley, players have a small supply of pavilions. When you place a tile, you may choose to build a pavilion on that tile. When you make a color match on a pavilion, you earn a gift from the emperor, a new currency that can be redeemed on new actions defined by emperor cards.

Each game, two Emperor cards are revealed from a small deck. Each turn, each player can redeem two gifts to activate one card and perform the special action associated with it: make an extra dedication at the end of your turn, convert favor tokens into victory points, etc. These actions increase the variety and puzzle of the base game. 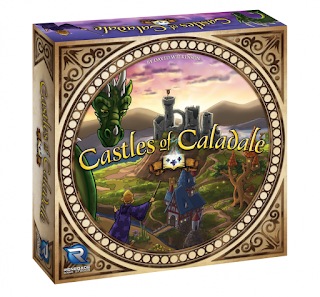 $30.00 SRP
In a forgotten time, when magic could move mountains, the Kingdom of Caladale was home to people of all kinds, living  in castles of unimaginable beauty. Yet, on one fateful night,  an ancient spell of great power was cast by one unable to control it.  By daybreak all of the castles were destroyed – their walls and towers torn apart, twisted  together and scattered across the land.

The people of Caladale must now rebuild, competing for walls and towers from the broken and twisted remains of each others homes to rebuild their castles and reclaim the glory of Caladale!

In Castles of Caladale, players lay tiles to construct beautiful castles, rebuilding the kingdom.  Working towards building the most complete and largest castle will earn players glory throughout the land!