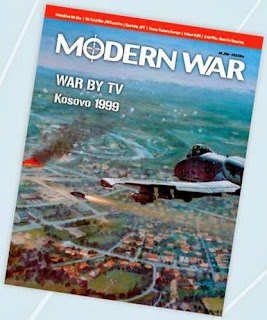 If the US and NATO had invaded Serbia is a “what-if” simulation of the fighting that might have occurred across rump-Yugoslavia in the late summer or early autumn of 1999 if the Western alliance had decided on a ground war to settle the Kosovo crisis. War By TV is a two-player wargame of low-to-intermediate complexity that posits this might-have-been war lasting about a month, about the maximum time before the invaders’ diminishing supplies, and their loss of the political will necessary to continue the fighting, would force a truce if victory had not already been achieved in the field.

Each hexagon equals 7.5 miles (12 km.) from side to opposite side. Each game turn represents two days. The units of maneuver are mostly brigades and division-sized groupings for the Serbians; each with about 2,000 to 5,000 men, and about 25 to 50 armored fighting vehicles in the tracked mechanized units. On the NATO side, units are divisions, corps and armies, each containing about 9,000 to 25,000 men and up to 350 or so armored fighting vehicles. The invaders’ air supremacy is built into several aspects of the rules (such as the CRT) and therefore is not represented by separate aircraft unit-counters.