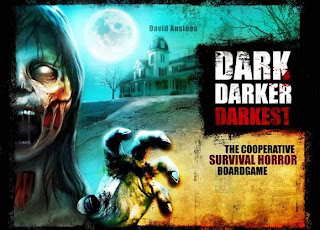 Dark Darker Darkest is an intense cooperative survival horror game in which a team of urban survivors try to fight the darkness in an unsettling location: the house of Doctor Mortimer, which holds the antidote to a virus turning the world into an army of undead.

Players must gather the optimal tools to open doors, control destructive fires that slowly destroy the locations of the game, and battle the endless hordes of terrifying creatures that will do anything to slaughter this fragile group, while outsneaking lurking creatures and the eye of the ever-present security cameras guarding the secrets of the house.

The game uses innovative mechanisms for group-forming and mixes item management (using a color-code system), exploration, stealth, and icon-driven combat to form an intense tactical experience in a strongly thematic setting riddled with surprises and variation. All the creatures and other challenges are controlled by the A.I. of the game system. The board is modular, creating a unique narrative experience for each session.

Can you fight the darkness? 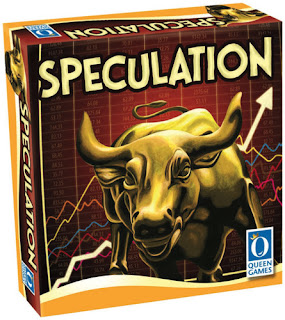 Players try to enlarge their fortune in an ever fluctuating market by trading shares at the opportune time to get the biggest possible profit. The player who was skilled and lucky enough to have the most money at the end of the game, wins.

Each player has a hand of nine cards; eight of them match the company shares that are available for purchase, while the ninth card is a “Bank Holiday” card. Each of the eight companies has 2-5 shares available, depending on the number of players, and each player starts with a randomly drawn share. At the start of the game, place six movement tiles (numbered 1-6) in one bag and six action tiles (trade x 3, rank +1, rank -1, no action) in another bag.

Each round, the starting player draw one tile from each bag. If he draws a rank +1 or rank -1, he moves one share price indicator (a.k.a. “brick”) of his choice up or down one rank on the movement track that organizes the company bricks. If he draws a trade, each player buys and/or sells one share to the bank. Players then simultaneously choose one of the two cards in their hand and reveal them. If no one played a bank holiday card, then in turn order, the brick associated with each company card advances on the movement track a number of spaces equal to the movement tile drawn, ignoring occupied spaces. The value of a company’s shares depends on the location of its brick on the movement track and its position relative to all of the other bricks. If one or more bank holiday cards were played, the bricks move only half the distance or don’t move at all.)

Players each draw a new card, and the bags pass to the next player in clockwise order, who becomes the starting player for the next round. If a trade tile was drawn, return all tiles to their respective bags first. The rounds continue until one or more company bricks reach the end of the movement track. At the end of that round, players cash out their holdings and whoever has the most money wins.