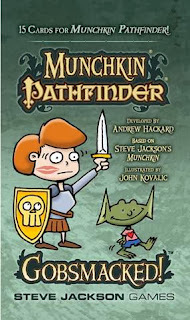 After we finished Munchkin Pathfinder, we found another hob of goblins hiding under the desk so we made a booster out of ’em. Fight off the Goblin Babies, Cog Goblin, and Goblin Hood with the Gobliterator! Just don’t get Gobsmacked!

This is an expansion and requires Munchkin Pathfinder (SJG4421) base game to play. 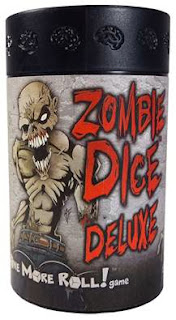 Zombie Dice is fast and easy for any zombie fan (or the whole zombie family). The 13 custom dice are your victims. Push your luck to eat their brains, but stop rolling before the shotgun blasts end your turn!

This deluxe version includes the classic game plus heavy plastic dice cup and score pad for your brain-munching pleasure! 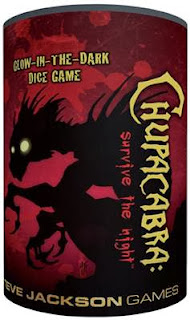 Can you survive the night? Night falls, and the bloodsucking Chupacabra stalks its prey. Its red eyes mean doom…

Divide up the 24 glow-in-the dark dice. When you roll a Chupacabra, you can take dice from your opponents but they can do the same to you. Claim all the dice, and be the only one to survive the night!

Posted by ACD Distribution at 1:30 PM