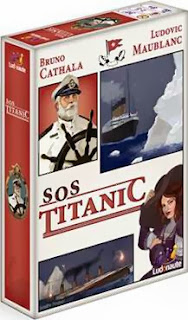 At 23:40 on April 14, 1912 in the North Atlantic, the R.M.S. Titanic strikes an iceberg. Water immediately floods into the liner's compartments and the ship is listing to starboard in a worrying way. There is no hope about the outcome. On board, there is widespread panic.

Alone, or co-operating with other crew members, you must show presence of mind and do the right thing to save as many passengers as possible. Time is short...

The card game SOS Titanic uses a mechanism similar to Patience, with the cards representing passengers who must be arranged on the decks, then placed in the lifeboats in a particular order. As one of the crew members, you and your teammates need to move and arrange these passengers as quickly as you can. Each section of the Titanic holds a pile of cards of which only the first is available.

Each turn, a player draws a few cards from the main deck and tries to move passengers out of the sinking ship onto the lifeboats. Failing to move at least one passenger or needing to reshuffle the main deck might cause one section of the ship to sink, thus reducing the number of piles available as well as the hopes of those still on board. Players can also use action cards to step in at fateful times when things otherwise seem lost. The game ends when the ship has sunk completely or when all remaining passengers have been saved. 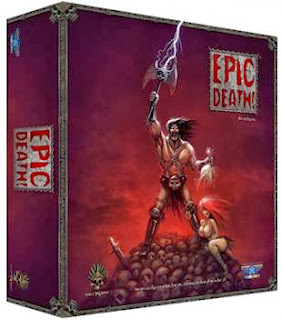 Epic Death! is a card game of fate, loot and meeting death in glorious battle! You control a rag-tag party of hardened adventurers, looking to don the biggest, shiniest loot before going toe to toe with mighty dragons, scheming sorcerers and undead chickens in the hope of attaining Epic Death!

Epic Death! is centered around weaving a story for your adventurers. Using piles of dice modified by fate cards, you strive to complete as many quests as possible, piling epic loot on to your characters, until the time comes to find death in the jaws of the most ferocious monster you can find. If only it was so easy.

During your quests, rival adventurers will be using their own fate cards against you in the hopes of making you gain fail, detracting from your final epic score with shameful tales of botched deeds. In the worst cases this can lead to you suffering ignominious defeat and death against lesser creatures, forever stricken from the annals of history. 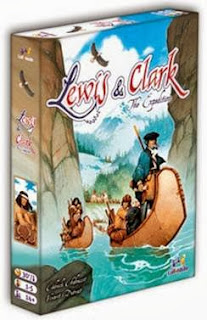 Lewis & Clark is a board game in which the players manage an expedition intended to cross the North American continent. Their goal is to be the first to reach the Pacific. Each one has his own Corps of Discovery that will be completed by the Native Americans and the trappers met during the journey. He has to cleverly manage his characters and also the resources he finds along the way. Beware, sometimes frugality is better than abundance.

Lewis & Clark features dual use cards. To be activated, one card must be combined with another one, which becomes unavailable for a while. Thus, players are faced with a constant dilemma: play a card or sacrifice it. During the game, each player acquires character cards that enlarge his hand, building a crew that gives him more options but it needs to be optimized as he will recycle his cards more slowly. This new “handbuilding” mechanism fits strongly the historical background.
Since the aim of the game is to be the first on the Pacific coast, the timing and the opportunistic use of the other players' positions are crucial. has sunk completely or when all remaining passengers have been saved. 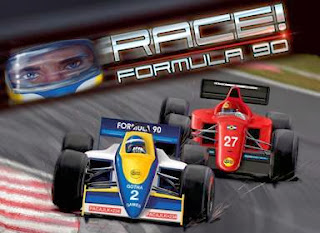 In Race! every game turn represents one or more laps of the track, and each player is in control of only one car. Other cars, called robots, move automatically on the track fighting between them and the human players. Players are provided with a set of racing cards and a car chart to keep track of all available resources (tires, damages, reliability). By playing racing cards, they move along the track and in so doing they spend resources. Movement can be affected by trajectories on the track, straight, corner and braking sections, opponents and other special events like yellow or blue flags.

Braking sections have a particular feature: here players and robots can try late braking, a dangerous maneuver that allows them to overtake multiple cars simultaneously. Other maneuvers or cards require a “check”, e.g., playing a card with a check value lower than a predefined target.

Strategies and driving skills are another key element of the game. Players must exploit these unique capabilities to gain against competitors while adapting their driving style to the actual race conditions. When using a strategy at his best, a player achieves a “special”, which allows him to draw a track card, which is usually more powerful than ordinary racing cards.

Race! is a board game with no dice in which strategy and risk melt together to convey a truly intense and deep racing experience. Usually the winning player combines excellent management of his car together with a pinch of opportunism and bravery. 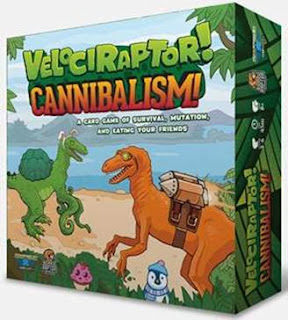 You play a velociraptor that grafts new body parts onto itself, mutating your creature in bizarre, horrifying, and hilarious ways. New body parts increase your food requirements, better parts costing more calories. Explore the jungle to find food, and reproduce or mutate further in times of plenty. Attack your opponents to steal their parts or children. Avoid going hungry at all costs. The most fruitful Velociraptor will win the day. 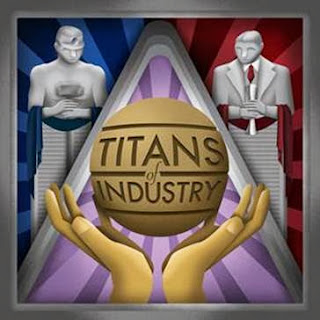 It is the 1920s, a time of much industrial building and growth. In Titans of Industry, you must invest in building factories and businesses in order to produce goods and sell them to gain victory points (VPs). Game play involves a delicate balance of money, production, and goals. The person who can best manage his buildings and meet his goals in seven years will win.

Each player starts the game with four workers and $6,000. Every turn, players first buy buildings, then place workers on those buildings or on the board. Factories allow you to produce goods, while Businesses allow you to sell those goods for money or VPs. A good player needs to balance production and sales, and encourage other players to sell with them to maximize sales. Board elements allow players to take advantage of bonuses, such as extra production, building improvements, and Corporate Strategy cards. Corporate Strategy cards help give players additional goals and direction, by specifying additional ways to gain victory points.

Three times during the game; years 1923, 1925, and 1927, upkeep will be due, and players must pay to maintain their buildings, or will need to take out loans. Players will need to sell enough goods before then to have enough money to cover the costs, as loans are worth negative victory points at the end of the game. After year 1927, whoever has the most victory points from combined sales, buildings, and Corporate Strategy cards wins the game. 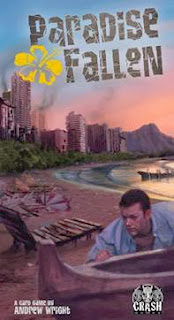 Things aren’t what they once were. Here in paradise, breathtaking views were a dime a dozen and awe-inspiring beauty was a blasé norm. The days of beauty and awe are few and far between now and are to be soaked up as if they could be your last because they just might be. The ground is broken as are the people. Paradise is no more, it is dark, it is cold. Paradise has fallen.

In Paradise Fallen: The Card Game, 2-4 players take on the role of tribes that are attempting to explore and navigate a fallen paradise through hand management to gather valuable powers that will enable them to survive and continue their journey. By drawing cards from the Exploration Deck on their turn, players gather the necessary rations and powers needed to explore. Throughout their journey, tribes will have to navigate islands with obstacles placed in their paths by others. The first tribe to successfully explore a certain number of islands for their powers wins. 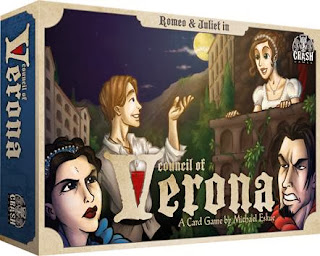 The citizens of Verona have grown tired of the constant quarrel between the houses of Capulet and Montague. As ruler of the region, Prince Escalus has formed a council to help mediate the conflict and bring lasting peace to Verona.

In Council of Verona, players take on the role of influential citizens of Verona and act to use their influence to either add characters to the council or cast them into exile. Through thoughtful hand management of their cards and clever placement of influence tokens, players gain victory points based upon the agendas of the characters at the end of the game. The player with the most victory points wins!

We’ve all heard the story of Romeo and Juliet – now is your chance to steer the story and determine who will rule Verona once and for all!

Posted by ACD Distribution at 5:35 PM