Deadlands Noir introduced you to the rain-soaked streets of “the Big Easy” and the heroes who battle from its shadows. The Deadlands Noir Companion shines a light on the rest of Noir North America-including Chicago, Shan Fan, Lost Angels, and the incredible City of Gloom. The Companion also introduces martial artists, and adds Sykers and the Blessed to the ranks of those struggling against the eternal darkness. Don’t go alone into the black night, shamus. Take a Companion. 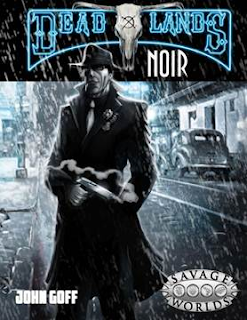 New Orleans, 1935. Whoever called this “the Big Easy” sure got that one wrong. Things are tough all over. Honest work is hard to find, and even dishonest jobs are getting scarce. The one thing that’s not in short supply is trouble. From shady thugs to crooked cops to Mafia soldiers, there’s plenty of characters out there looking to give an honest Joe a hard time. And that’s not the worst of it. There are stories going round about things that go bump in the night. Things you wouldn’t want to meet in a dark alley on a darker night. And those stories aren’t just coming from rummies or saps who read that Epitaph rag. Still, there are a few heroes left in the concrete jungle. Steely-eyed private dicks, fast-talking grifters, wild-eyed inventors, and shadowy houngans still struggle against the encroaching darkness. With enough moxie-and more than a little luck-they might just be enough to turn the tide.

Deadlands Noir is a pen-and-paper roleplaying game set in the world of Pinnacle Entertainment’s award-winning Deadlands universe. It includes new Edges, Hindrances, and powers, as well as new rules for handling detective work, the state of the Union and the CSA in the Depression-era, a complete Plot Point campaign, and of course, more monsters and ghouls than you can shake a smoking .45 automatic at.

Deadlands Noir is not a complete game. It requires the Savage Worlds core rules to play. 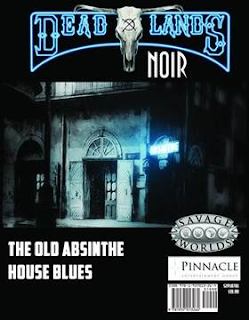 This is a full-color 3 panel landscaped format GM Screen that comes with the 32 page full-color adventure, The Old Absinthe House Blues. 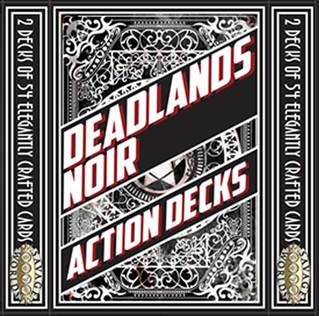 The action in Deadlands Noir comes fast and furious. Keep up with the flying lead and sizzling mojo with these two gorgeous 54-card decks designed by three-time Hugo award winning artist Cheyenne Wright.

Contains a double-sided, erasable, gridded poster map of New Orleans for Deadlands Noir and the Hexaco Oil Map of North America from the Deadlands Noir Companion. 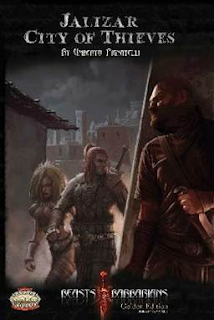 Jalizar, City of Thieves, the Rotten Flower of the North, is revealed to your eyes in this book! In its pages, you’ll learn the seedy ways of the Thieves’ Guild. You’ll smuggle goods into the city, fooling the Copper Helms, the corrupt city watch of Jalizar, vie for power with the Merchant Houses or, if you are really bold, venture into the dark Sewers of Jalizar where an age-old evil lurks undisturbed.

Twenty new Edges, new trappings and tweaks for the arcane backgrounds, an additional list of gear, and much more await you in this book! So sharpen your dagger, put on your black cloak, and step outside into the dark alleys of the City of Thieves!
Posted by ACD Distribution at 1:00 PM