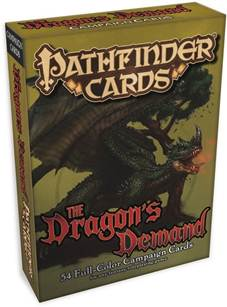 Get the most out of The Dragon’s Demand, the deluxe Pathfinder Module from Paizo Publishing! With a selection of Item Cards to help players track important treasure and Face Cards to aid in the depiction of NPCs, the new Campaign Deck format also introduces Quest Cards, summaries of key adventure goals that keep players on track to getting the most out of their adventuring experience.

With beautiful illustrations on every card and direct tie-ins to The Dragon’s Demand Pathfinder Module, this useful 54-card deck is the greatest of the dragon’s many wonderful treasures. 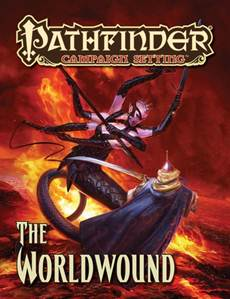 A century ago, the nation of Sarkoris was murdered. Today, the fallen nation is a horrific, post-apocalyptic nightmare cloven by a vast canyon that connects Golarion to the demon-haunted reaches of the Abyss. This rift is known as the Worldwound, and through it the demonic hordes pour forth, set on defiling the world of mortals and claiming it for their own. Though the demons have so far been held back at the borders by barbarians and crusaders alike, the region that was once Sarkoris remains a fiendish beachhead on the mortal realm. Worse, the Worldwound itself is slowly growing-and if something isn’t done to halt this blight, the demons it spawns might one day swallow all of Golarion!

Inside this book, you’ll find:
-Ruined cities, such as the shattered capital city of Iz, the frozen city of Dyinglight, and the river city of Undarin.
-An exhaustive examination of the strange and otherworldly hazards of this demon-ruled region.
-Key historical sites such as the Circle of the Hierophants, the Shroud of Unicorns, and Threshold, the fortress where the Abyssal portal first opened.
-Adventure sites ready for exploration, as well as locations like the holdout town of Gundrun, a safe harbor in a deadly land.
-More than a dozen new monsters, including several new demons and two new monster templates, ensuring PCs will never lack for foes in this devastated realm! 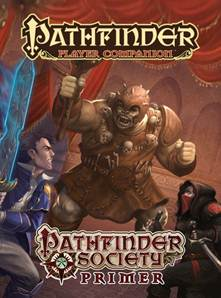 Whether drawn to ancient crypts in search of treasure, long-lost secrets, or the potential for fame, countless adventurers hope to someday join the illustrious Pathfinder Society, a loose organization of scholars, explorers, and thrill-seekers that searches the globe in search of wonders.

This player-focused guide to the organization provides both neophyte Pathfinders and seasoned veterans with the tools of the trade-the wealth of knowledge of past Pathfinders and access to the mysteries safeguarded in the vaults of the Grand Lodge of Absalom. It includes new equipment to aid you in high adventure and exploration, including new wayfinders and ioun stones, and both magical and mundane volumes of the legendary Pathfinder Chronicles.

Packed to the brim with new spells, feats, traits, vanities, and more, Pathfinder Player Compaion: Pathfinder Society Primer is a must-have for the more than 35,000 players in Paizo’s worldwide Pathfinder Society Organized Play campaign as well as Pathfinder RPG players looking to add the organization to their own home campaigns! 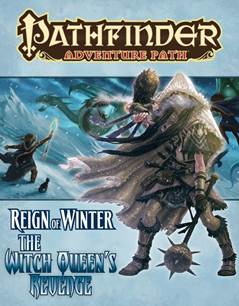 Baba Yaga has been rescued from the clutches of her son Rasputin, but the Queen of Witches remains trapped inside a magical matryoshka doll. Delving into hidden chambers deep within the Dancing Hut, the heroes must open the nesting dolls imprisoning Baba Yaga, but they also must contend with the hut’s most dedicated guardians, including the former queens of Irrisen. The campaign reaches its climax when the heroes finally face Queen Elvanna, fourteenth daughter of Baba Yaga, inside the Dancing Hut’s innermost sanctum. Will the heroes defeat Elvanna and finally free Baba Yaga, or will their failure plunge Golarion into a new ice age ruled by the Witch Queen of Irrisen?

“The Witch Queen’s Revenge” is a Pathfinder Roleplaying Game adventure for 15th-level characters. This volume concludes the Reign of Winter Adventure Path, in which players fight off a magical winter by venturing into the fabled hut of the ancient witch Baba Yaga and trace her schemes across the worlds. This volume also includes a look at the history and secrets of Baba Yaga (including her stat block as a mythic spellcaster), several new monsters, and the conclusion of Kevin Andrew Murphy’s thrilling Pathfinder Journal novella. 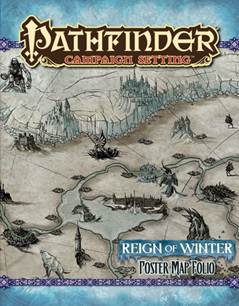 Huge poster maps depict the city of Whitethrone-capital of the frozen realm of Irrisen-and the rough wilderness region of Iobaria. The third map is a giant player-oriented map of Irrisen designed to look like an ink-and-parchment drawing of the region, complete with sketches of local threats and legendary winter creatures! Whether you’re looking for a wintry city or a mysterious regional map for inspiration and adventures, these beautiful maps are the perfect resource for the Reign of Winter Adventure Path or any fantasy campaign. 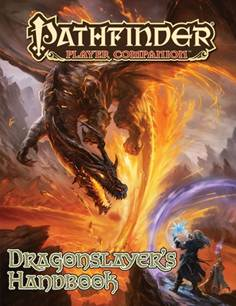 Prepare yourself to do battle with the ultimate monsters with Pathfinder Player Companion: Dragonslayer’s Handbook. Discover the secrets of dragonkind, from devastating red dragons to venomous wyverns. Learn how to survive battle with ravenous wyrms, but also how to manipulate such creatures through guile, or even capture them alive. Master the right tactics to employ in battle against dragons of all types, including how to locate and survive their treacherous lairs—the homes of their legendary hoards. Once you know your foe, join the ranks of the Inner Sea’s greatest dragon hunters, learn their tested methods, adopt their lethal gear, and employ their massive, dragon-fighting war machines. New archetypes, feats, spells, magic items, and more give you the edge against even the deadliest dragons.

No hero’s career has truly begun until she’s slain her first dragon-let Pathfinder Player Companion: Dragonslayer’s Handbook start you on the path to legend.

Inside this book, you’ll find:
-Tips to aid even the most inexperienced dragonslayers in dealing with dragons, preparing to hunt them, and forming organizations of like-minded adventurers.
-Traits and story feats to help you create character backgrounds involving some of the most infamous draconic threats in the Inner Sea region.
-Dozens of new traits to further ingrain your character in the world of Golarion and make sure that his first adventure isn’t his last.
-An all-new system of crafting alchemical and mundane items out of the bodies of slain dragons.
-New magic items, spells, and feats for characters planning to do battle with dragons, whether willingly or out of necessity, including new siege weapon ammunition. 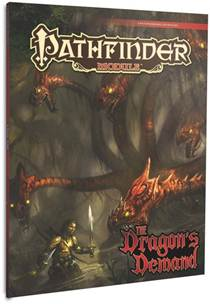 The village of Belhaim is nestled in rural Taldor, a minor stop on the road through the Verduran Forest between Maheto and Wispil. When an abandoned tower at the edge of the village collapses during a thunderstorm, a previously unsuspected infestation of kobolds comes to light. Unfortunately for Belhaim, the kobolds are in fact the least of their worries, for something sinister gathers power deep in the nearby expanse of Dragonfen, a swamp with a long history of draconic problems. It's been many years since a dragon has last menaced Belhaim, but all good times must come to an end. Can the town's newest adventurers fill the traditional role of dragonslayer and save Belhaim from the new master of the swamp?

Pathfinder Modules: The Dragon’s Demand is deluxe super-adventure for 1st-level characters, and kicks off a relaunch of Paizo’s popular Pathfinder Modules line, which now includes 64 action-packed pages of adventure and a beautiful two-sided full-color poster map with each quarterly release! Players can expect to reach 6th level by the time they complete this epic adventure-if they manage to survive! 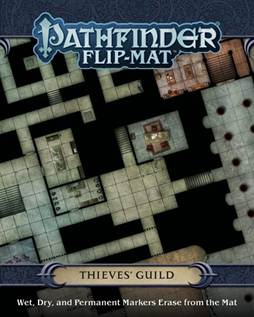 Whether your players are plumbing the depths of a treasure vault or escaping through a sewer, no Game Master wants to spend time drawing sites for the complex maze of a thieves’ guild. Fortunately, with Paizo Publishing’s latest Pathfinder Flip-Mat, you don’t have to! This line of gaming maps provides ready-to-use and captivatingly detailed fantasy set-pieces for the busy Game Master. Whether it’s used for a full-on invasion of a thieves’ guild’s headquarters or tracking down a burglar, this double-sided map is the perfect place for larcenous adventure!

Don’t waste your time sketching when you could be playing. With Pathfinder Flip-Mat: Thieves’ Guild, you’ll always be ready to send your players into a plunderer’s paradise! 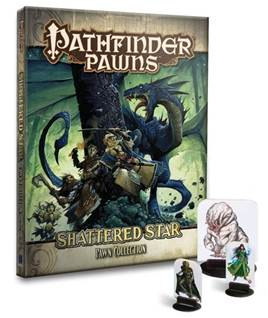 Printed on sturdy cardstock, each pawn presents a beautiful full-color image of a monster or NPC from the Shattered Star campaign, including giants, constructs, ancient undead, Lovecraftian horrors, and dozens of unique NPCs also suitable for representing player characters. Designed for use with the Pathfinder RPG Bestiary Box, each cardstock pawn slots into a size-appropriate plastic base from that collection-making them easy to mix with traditional metal or plastic miniatures-and supplements the Bestiary Box’s creatures, together providing pawns for nearly every Shattered Star encounter. With tons of distinct creature images, the Shattered Star Pawn Collection brings to life the enemies and allies from all six adventures of the Shattered Star Adventure Path.
Posted by ACD Distribution at 9:00 AM