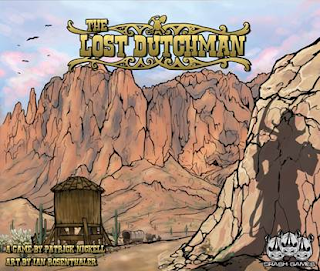 Over a hundred years of legend awaits you and your skills as you vie to be the lucky prospector to hike out of the Superstition Mountains with The Lost Dutchman’s Gold. However, this expedition for lost gold isn’t for the faint of heart. You will face grizzly creatures and dastardly disasters around every corner and even the ghost of The Lost Dutchman himself while contending with your opponent's thirst for gold that grows with every nugget uncovered.

In this treacherous treasure adventure, prospectors must balance their skills to take on fierce creatures and dangerous disasters with their search of gold. Will you find the most treasure by prospecting or will the map lead you to victory? No one path guarantees victory but with the right amount of skill and a little bit of luck you can be the first prospector to uncover the famed Lost Dutchman’s Gold!