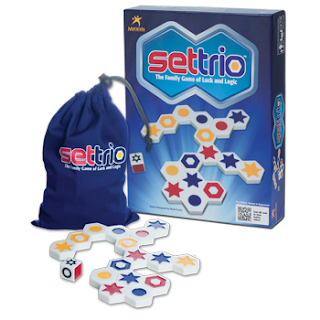 Your powers of observation will be put to the test in this game where no two pieces are alike, and their differences are what bring them together.

Play your next double-hex pieces adjacent to a specific color or shape designated by the die. If you can find a spot and complete a set, your move is good, but if not, it’s back to the draw pile for you. Place all your pieces and you’ll win, but not before Settrio will challenge your mind, reward your senses, and have you vexed, perplexed, and double-hexed! 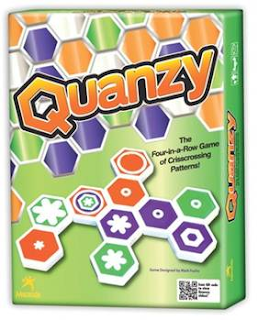 Learn Quanzy easily, but master Quanzy? Maybe. Place your heagonal tiles next to others, matching on at least one attribute: symbol, color or size. Be first to get four-in-a-row, and you’ll win. Sound easy? There’s a lot to look at, and so many ways to make a match, it’s quick to play, but easy to forget to stop your opponents from winning! Four-in-a-row is the goal: symbol, color, size and strategy are the key. 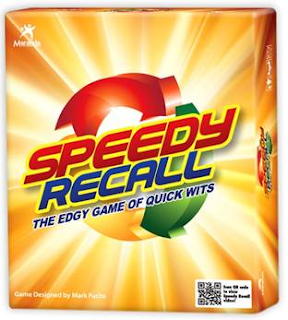 Shuffle up the cards and get ready to shuffle through your head! Quick! What’s a movie that starts with R? A fruit that starts with M? A book character… P?! Put the Letter Cards in one stack, the Category Cards in another, and fast - flip over both top cards! A thousand different possible category and letter combinations keep you on your toes as everybody plays at the same time, trying to make a speedy recall and shout a good response. There might be lots of correct answers, but you’ve got to be first! Collect category cards to keep score, play with two or more! Speedy Recall goes anywhere and promises quick, memorable fun! 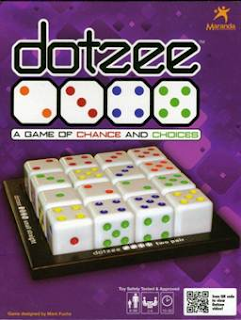 Spot the Dotz to win at Dotzee, the swift and sneaky game of pattern recognition that mixes luck and strategy into tons of fun! Roll the great big dice and strategically slide them to form different combinations. Shoot for four of a kind, two pair, a small straight or a flush and score! Pay Attention!...the dice make up the game board, and the game board changes on each and every turn. If you can see the possibilities to score before they actually appear, you’ll be more spot-on with your strategic moves. Fun for two players or more...put your family and friends on the spot - play Dotzee! 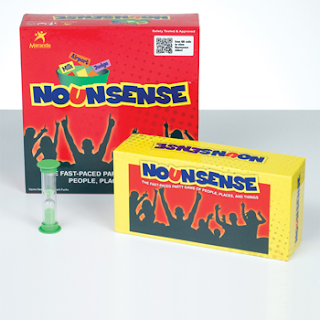 Time is tick-tick-ticking as you describe for your teammates the person, place or thing on one of the 60 cards in play. “It’s the sniffer in the middle of your face!...it’s called a ‘schnoz’!” Your teammate shouts, “Nose!” (score!) Move to the next card! Speed through words until your minute is up. Pass the remaining cards to the other team and listen carefully as they do the same! Round two with the same 60 cards, you only get 3 words to describe the same nouns! “Sniffer-face-schnoz!.” Round three guess the person, place or thing from one word clues! Belly laughs ensue as the time ticks down. Can you name that noun? Bring your people to your place... Nounsense is the thing! 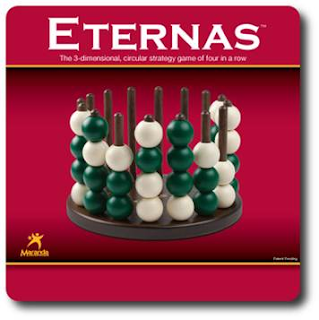 Eternas is a fun new 3-dimensional strategy game of four in a row. The rules and concepts are simple enough to appeal to kids from 6 to 96 years of age. But, don’t let the simplicity fool you. While Eternas is quick and easy to learn, there is a depth of strategy that will keep you thinking.

Eternas is a four in a row style game in which the first player to place four bead of their color in a row, either vertically, horizontally or diagonally, wins the game. Conceived around the shape of the circle (the symbol for eternity) Eternas was designed for borderless play. The rules have been drafted so that there is always a winner, no ties, stalemates, or cat’s games. 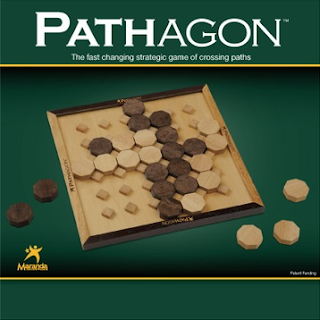 Pathagon is an exciting, ever changing new strategy game of building paths. While Pathagon is quick and easy to learn, there is a depth of strategy that will keep you on your toes.

Players take turns placing their wooden game pieces on the board in an attempt to build a path from one side of the game board to the other. There is a “trapping” move that allows a player to “trap” and remove one of their opponents game pieces from the board. The first player to complete the path wins. Sounds simple, doesn't it? The catch is that the two paths cross. Every move has an offensive and defensive consideration.

Pathagon is simple enough to be played by children, strategic enough to engage a true gamer. The rules have been drafted so that there is always a winner, no ties, stalemates, or cat’s games. 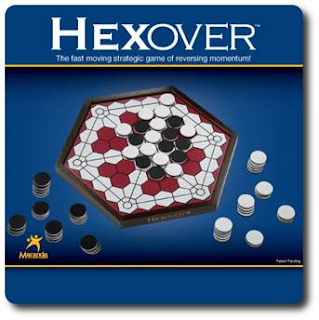 Hexover is a fun and fast moving new strategy game of reversing momentum. Hexover takes a new twist on play pattern with roots dating back to England is the 19th century. The play pattern, which consists of trapping and flipping opponents disks, is familiar to people worldwide who have played Reversi (either the game or on the internet).

The object of Hexover is to be the first player to complete a string of five disks in their color on the white hexagons on the game board, with at least one game piece being positioned on the outside row. Because of the hexagonal shape of the game board, players have to stay alert to all of directions impacted by each move. Hexover is a game of planning, positioning and rich strategy. The obvious move, may not be the best! The rules have been drafted so that there is always a winner, no ties, stalemates, or cat’s games. 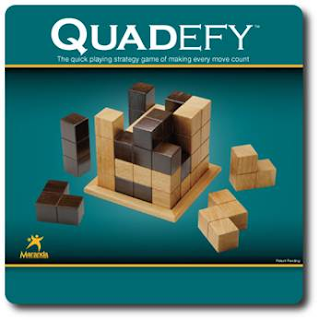 Quadefy is a fast playing new strategy game played in three dimensions. Easy to learn and quick to play, Quadefy uses visual spatial skills and strategies that will keep you on your toes. When playing Quadefy, you have to think a little bit strategist and a little bit puzzle builder.

Players take turns stacking their game pieces on the base, each attempting to keep their entire game piece “in bounds.” “In bounds” means that the piece must be completely over the game base and no more than four “cubes” high. The first player to force their opponent to have to play out of bounds, wins. Every move is both offensive and defensive, making Quadefy very fun to play. The rules have been drafted so that there is always a winner, no ties, stalemates, or cat’s games. 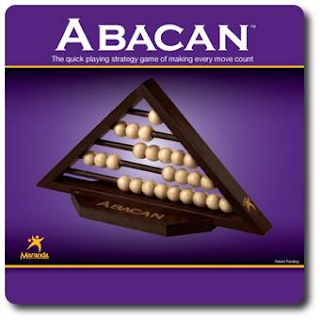 Don’t let the simple appearance fool you. Abacan is a fun new strategy game that uses simple rules to provide a depth of strategy that grows with the experience of the players. Abacan is a variation of the nearly 3000 year old Chinese mathematical game of Nim.

To play, players alternate turns sliding 1,2, or 3 beads on the same bar from one side of the game to the other. The winner is the player who forces their opponent to move the last bead.

The rules have been drafted so that there is always a winner, not ties, stalemates, or cat's games. Hand crafted from high quality hardwoods, Abacan is pretty enough to be left out on the coffee table or bookshelf to be played again and again. 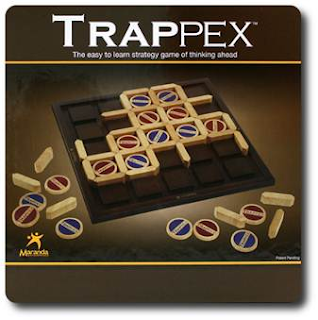 Playing Trappex is little bit like reuniting with an old friend. While it is comforting rekindling childhood memories with the time tested “Dots and Boxes” play pattern, there is still something new and different how the game has grown up in the meantime. Even though Trappex is quick and easy to learn, there is a depth of strategy that will keep you alert from your first move till your last.

To play, players take turns placing their wooden “wall” pieces on the board, attempting to complete squares while preventing their opponent from doing the same. The player with the most completed squares at the end of the game wins.

Trappex is simple enough to be played by children, strategic enough to engage a true gamer. The rules have been drafted so that there is always a winner, no ties, stalemates, or cat’s games.
Posted by ACD Distribution at 9:30 AM