Star Wars: Destiny
Play out the battles of your imagination in Star Wars: Destiny, a collectible dice and card game of epic, fast-paced duels for two players! In every game, you and your opponent command a team of iconic heroes or villains from throughout the Star Wars saga, using their unique skills to defeat your enemies.

Each round, you’ll use your characters’ abilities, an assortment of large, premium dice, and a carefully constructed thirty-card deck filled with events, upgrades, and supports. You and your opponent alternate actions: activating your dice, playing cards from your hand, attacking your foes, and claiming the battlefield. You’ll need to prove your skills and defeat your opponent’s characters to claim your destiny!

Enter a world of epic, saga-spanning, "what if" battles with the Kylo Ren Starter Set for Star Wars™: Destiny! With an array of characters that spans the saga from The Phantom Menace to The Force Awakens, Star Wars: Destiny gives you the freedom to play out any battle you can imagine. Innovative gameplay blends dice and cards as you strategize exactly how to defeat your opponent's characters. Meanwhile, the game's collectible model invites you to enter the game at whatever pace you choose, tweaking your decks with the addition of new cards and dice from booster packs.

The Kylo Ren Starter Set is an ideal starting point for you to enter Star Wars: Destiny. Here, you'll find a fixed set of twenty-four villainous cards with nine premium dice, alongside tokens and a rule sheet—everything you need for one player to take command of Kylo Ren and a First Order Stormtrooper to oversee the rise of the First Order.

The Rey Starter Set is an excellent starting point for you to enter Star Wars: Destiny. Here, you'll find a fixed set of twenty-four heroic cards with nine premium dice, alongside tokens and a rule sheet—everything you need for one player to take command of Rey and Finn while fighting for the light side across the Star Wars galaxy. 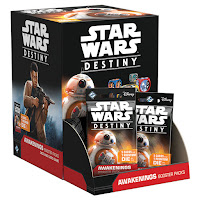 Customize your decks and enter the game at your own pace through Awakenings Booster Packs for Star Wars™: Destiny! An array of characters that spans the saga from The Phantom Menace to The Force Awakens gives you the freedom to play out any battle you can imagine in Star Wars: Destiny, and with Awakenings Booster Packs, you can supplement your collection of cards and unlock new types of decks.

Every booster pack includes five randomized cards and one premium die, broken down into three common cards, one uncommon card, and one rare or legendary card with a corresponding die. All cards that feature a corresponding die are either rare or legendary cards. With every booster pack, you'll find new characters, supports, upgrades, or events, along with new ways to enter the Star Wars galaxy and fight for your chosen side!

There are 36 booster packs included in an Awakenings display case. 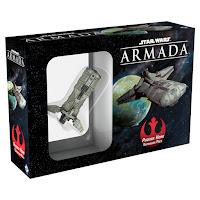 Under the command of Jun Sato, the Phoenix Home was the nerve center of the fledgling Rebel fleet, and it makes its way to Star Wars™: Armada in the Phoenix Home Expansion Pack. What this small-base ship lacks in size and firepower, it makes up with its ability to command your fleet. Along with one pre-painted miniature starship, you will find two ship cards, ten upgrade cards, and all the dials, bases, pegs, and tokens you need to control the battle, more effectively coordinating your capital ships and fighter squadrons alike. 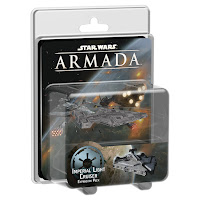 As seen in the Star Wars Rebels television show, the Imperial light cruiser is a communications and blockade ship used to help the Empire spread its domain throughout the galaxy. In Star Wars™: Armada, the Imperial Light Cruiser Expansion Pack presents this ship as a fast, small-base Imperial vessel that excels at providing long-range fire support from its broadsides. With its ship, its two ship cards, eight upgrades, and all requisite accessories, the Imperial Light Cruiser Expansion Pack will have you racing around the Rebels' flanks and into a new era for Imperial tactics! 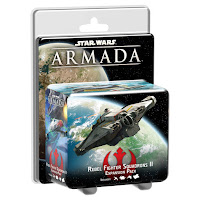 Rebel pilots are masters of improvisation, and you can bring their talents to your games of Star Wars™: Armada with the Rebel Fighter Squadrons II Expansion Pack. The venerable Z-95 Headhunter, agile Lancer-class Pursuit Craft, and sturdy VCX-100 Freighter lend new strength and tactics to your fleet, helping you win even the most desperate of battles. Together with the advanced E-wing fighter, these crafts add firepower and versatility to your Rebel forces, and their pilots carry the hopes of freedom for a beleaguered galaxy! 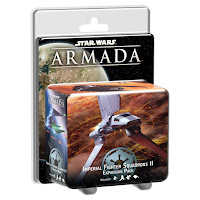 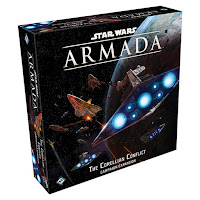 Join your friends in open warfare to decide the fate the Corellian Sector! The Corellian Conflict campaign expansion for Star Wars™: Armada allows you and up to five of your friends to wage an epic campaign spanning multiple fleet battles. Take sides with the Galactic Empire or the Rebel Alliance, then vie for key hyperlane routes, seize vital shipyards, and establish new bases. Victory depends on your team's ability to control vital worlds while crushing your foes in battle!

The Corellian Conflict also introduces twelve objectives that expand upon the challenges presented by the objectives in the Core Set. Finally, as you pursue these new paths to victory, you can consider the strategic advantages offered by sixteen unique squadron cards, all of which allow you to field legendary pilots and squadrons of the Galactic Civil War in combat!

"His High Exaltedness, the great Jabba the Hutt, has decreed that you are to be terminated immediately."
–C-3PO, Star Wars: Return of the Jedi

Throughout the saga, Star Wars has been defined by rivalries and conflict. Luke Skywalker, hero of the Rebellion, is opposed by Darth Vader, one of the Dark Lords of the Sith. Han Solo, a smuggler from the Outer Rim, is tracked by Jabba the Hutt and his teams of bounty hunters. Princess Leia Organa is taunted and questioned by Grand Moff Tarkin. These enmities and threats bring the characters to life, and now, you can bring some of these rivalries into your games of Star Wars: The Card Game with Scrap Metal, the next Force Pack in the Opposition cycle.

Like the other Force Packs of the cycle, Scrap Metal comes with ten new objective sets (two copies each of five distinct sets), each challenging the way you view the battles between the factions of Star Wars: The Card Game. Here, you'll find a host of new versions of iconic characters, including Jabba the Hutt, C-3PO, R2-D2, and Jek Porkins. With plenty of new fate cards to bring new tension to every edge battle, the rivalries that exist between factions are about to become more explosive and dangerous than ever before!

FFGSWA41
Star Wars: Age of Rebellion: Friends Like These 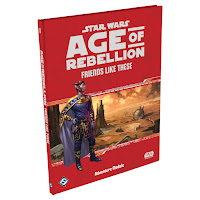 Time is running out for the planet Xorrn in Friends Like These, an adventure supplement for the Star Wars®: Age of Rebellion™ roleplaying game. When intelligence reveals that an important and secret shipyard is under threat, the player characters have two days to arrange the planet's defense and recruit allies in the region before Imperial forces arrive. Friends Like These takes players to a new sector where they encounter Mandalorian culture and face a brutal moral decision regarding who the Rebel Alliance should call friends.

Within the 96 full-color pages of this supplement, players and game masters will find gazetteers for three new planets, countless NPCs, and directions for creating playable human characters of the Mandalorian culture. Although designed primarily for Age of Rebellion players, because of its Outer Rim focus and balance between warfare and diplomacy, Friends Like These is ideal for groups incorporating characters and material from Edge of the Empire™ and Force and Destiny™ as well.
Posted by ACD Distribution at 4:17 PM