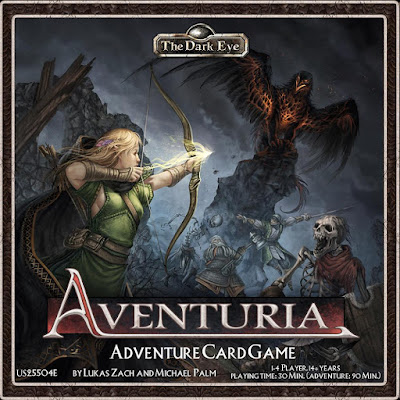 Aventuria is a dangerous place. Lurking behind every corner may be treacherous monsters, exciting adventures, or an ill-humored comrade who challenges you to a duel. Gather your weapons, armor, and magic spells! Acquire unique skills and surprise your opponent with unexpected tricks!

But you must strategize as well—will you gather your strength so you can play a Shining Blade later? Or will you keep attacking with your dagger and try to disarm your opponent?

Aventuria is a fast-paced card game for 1–4 players, ages 14+, where each player takes the role of a hero from Aventuria. Choose from Arbosh the fierce dwarven smith, Layariel the fleet-footed elven scout, Carolan the cunning half-elven rogue, or Mirhiban the mysterious Tulamydian mage.

In Duel Mode, heroes fight against each other, while in the cooperative Adventure Mode, heroes join together as a party and go on exciting adventures. Whether battling against each other or standing united against a terrifying foe, players draw action cards every round which constantly improve their abilities. But beware, for each round brings new challenges, and you must always watch for surprise attacks from your enemies! 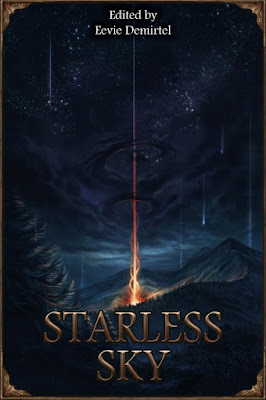 $14.99 SRP
SDI
When stars fall from the sky, the peoples of Aventuria see visions of impending doom. The signs are clear to everyone, from simple farmers to clergy and even crowned heads of state.

Whether these visions will prove true, or even possible, none can say. The Walls of Alveran tremble and the 13th god rattles his chains. When such a powerful entity moves even his little finger, monumental events are set in motion. The Turn of Ages brings great change to Aventuria. The fate of a continent, nay, an entire world hangs in the balance, and valiant heroes may tip the scales.

This collection of short stories gathers tales related to the fateful event known as the Starfall.

Within these pages you'll find over 20 fantastical stories that transport you to the far corners of Aventuria, and beyond.
Posted by ACD Distribution at 4:25 PM