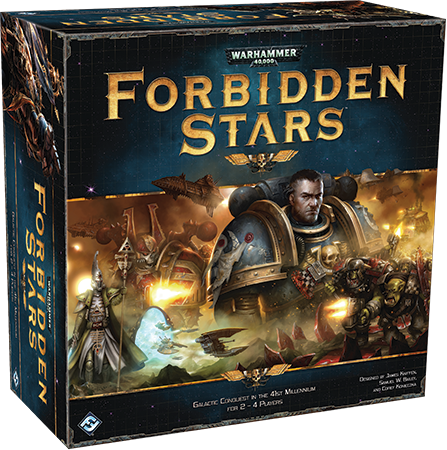 Bring fire and bring shell and heap all upon the pyre. With flame and gun we shall make an end to the withered husk that is human life. And in the blazing furnace of battle we shall forge anew the iron will of a yet stronger race.
–Warhammer 40,000

The shifting Warp Storms that surround the long lost Herakon Cluster have finally abated, leaving the ancient treasures and planets within this sector open to the rest of the galaxy. Now, the great factions of the galaxy mobilize their fleets and race to establish a foothold. The reward for successful domination surpasses all other concerns, and the price for conquering this sector will be paid in lives.

Forbidden Stars challenges you and up to three other players to take command of a mighty fighting force: the Ultramarines chapter of Space Marines, the Eldar of Craftworld Iyanden, the Evil Sunz Ork clan, or the World Eaters Warband of the Chaos Space Marines. Each faction offers unique armies and play styles, but your goal remains the same – to claim the key objectives selected for your faction. These objective tokens are scattered throughout the Herakon Cluster, but your opponents are sure to defend your objectives against you.

You’ll need to build massive armies and command them in unending war to best your enemies and claim your objectives. The fight for the Herakon Cluster is brutal and bloody, and you will either stride triumphant over the bodies of your fallen foes, or they will do the same to you. Will you survive and be hailed as a conquering hero? Or will your only epitaph be on a list of those who lost everything in the Herakon Cluster? 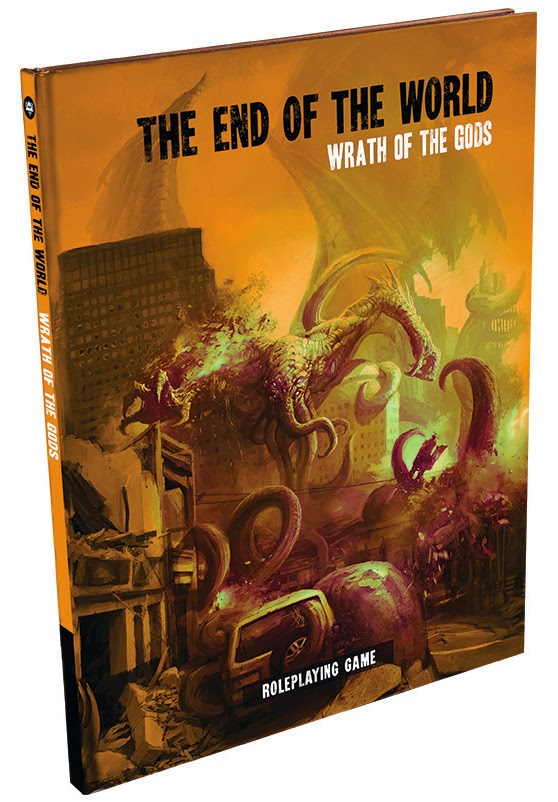 The supernatural enters the physical world in Wrath of the Gods, the second book in The End of the World roleplaying line!

With the scenarios included in this book, you can take up arms with heroes of yore and the Norse gods, or flee from the mind-bending terror of Cthulhu. You may hide from the Four Horsemen as the events of Revelation take place, speak to Quetzalcoatl as the Mayan apocalypse unfolds, or battle wild beasts as Earth itself turns on us. Wrath of the Gods brings you as close as you can (safely) come to supernatural powers ending civilization!

This roleplaying game offers you the chance to play as yourself during the tumult of the apocalypse, using an elegant, narrative ruleset. Wrath of the Gods contains five unique scenarios, each offering a different take on the end of humanity by divine wrath.

Each scenario also contains an apocalypse and a post-apocalypse, allowing you to survive the initial panic and make your way in life after the world’s ending.

Whether you take up arms with heroes of yore, ambush a hunting Star-Spawn, or travel through the trackless forests that consume our cities, you’ll find new adventure and thrills at the end of the world with Wrath of the Gods! 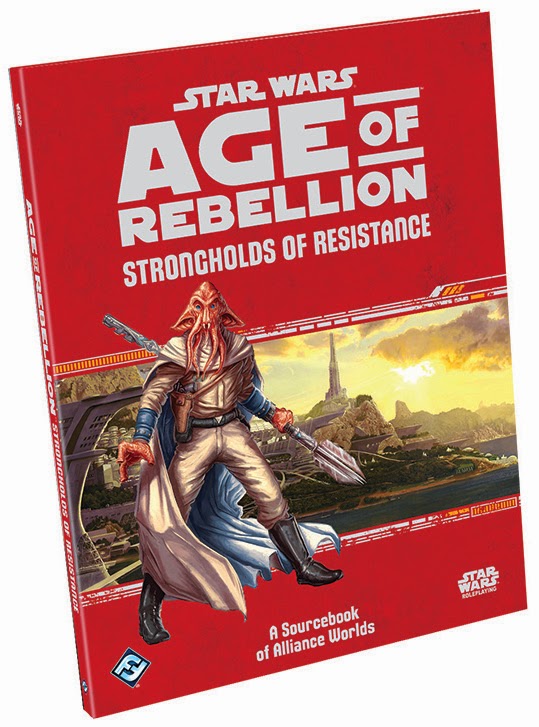 “And now, your highness, we will discuss the location of your hidden Rebel base.”
–Darth Vader

Strongholds of Resistance takes you to worlds that have boldly revolted from Imperial control and to the secret bases which serve as the command centers of the Rebellion. Your team of Rebel operatives might visit several of these locations in your work for the Rebel Alliance, or embark on a series of adventures amid the conflicts and challenging terrain of a single planet. Game Masters can easily integrate these new locations in their ongoing campaigns using the included modular encounters, or even launch a fresh campaign focused on worlds that are actively resisting the evil Empire or on the war efforts of a specific Rebel base.

The war against the Empire has as many fronts as the galaxy has planets. You never know where your missions for the Rebel Alliance will take you, who you’ll encounter, or what will be the location of your next home base. With the new settings, adversaries, character options, and gear introduced in Strongholds of Resistance, the possibilities are endless. 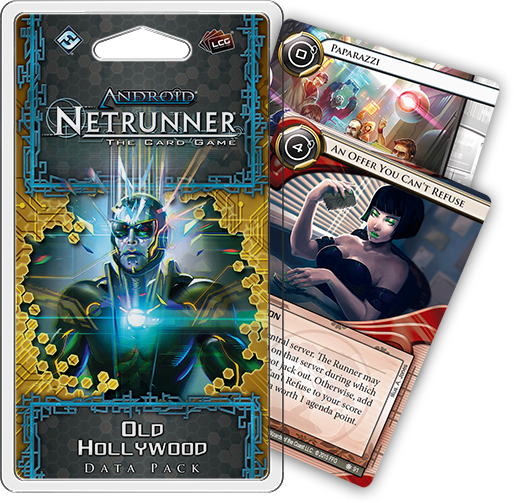 Ronny Five is taking heat for his failure to show at a scheduled appearance in the Bangkok Mall. The bioroid star of ‘Friendship, Upgraded’ was supposed to meet and greet fans in front of the YucaBean for an hour. Instead, the crowd became rowdy and agitated when the star failed to appear.
–Today’s Sizzle

From the vaults of Haarpsichord Studios come sixty new cards (three copies each of twenty different cards) full of glitter and glitz. As the SanSan Cycle continues its tour along the western coastline, Old Hollywood brings us whole servers worth of romantic comedies, action flicks, red carpet events, and fan sites. Everyone wants a taste of fame. Everyone’s jostling to get a cut of the market.

Who is Miranda Rhapsody dating now? Why did Ronny Five fail to show for his appearance at the Bangkok Mall? Which surprising celebrities are hooked on stims? In Old Hollywood, everything’s a story, and the best stories are worth big money. 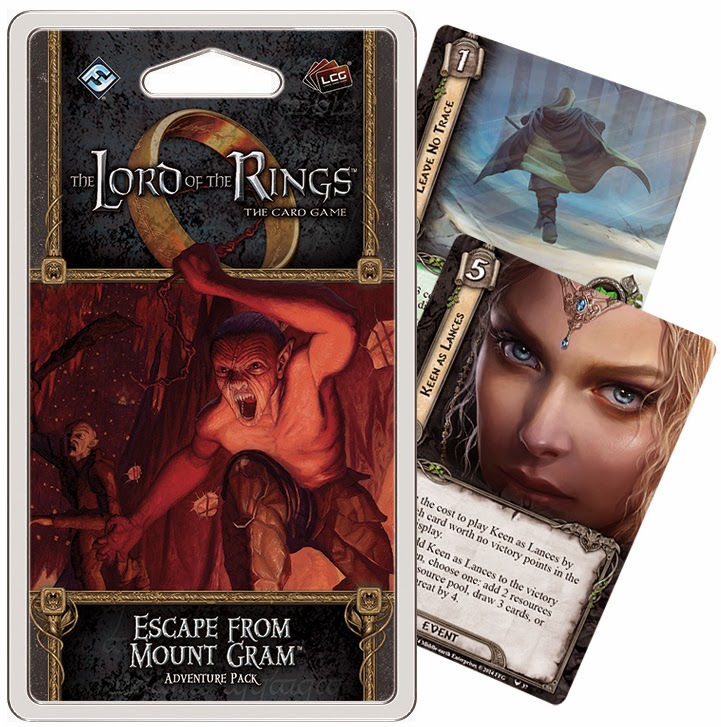 “It was deep, deep, dark, such as only goblins that have taken to living in the heart of the mountains can see through. The passages there were crossed and tangled in all directions, but the goblins knew their way”
–J.R.R. Tolkien, The Hobbit

For centuries, the Goblins of Mount Gram have remained hidden within their dark stronghold. Their past attempts at invading Eriador are but distant memories. Still, they live in lands tainted by ancient evils, and evil lives within their hearts. Now, in Escape from Mount Gram, the Goblins of Mount Gram are once again up to trouble, and when they capture a host of Rangers and heroes, it’s up to you and your heroes to lead a daring and dramatic prison break!

In addition to its wild, new scenario, Escape from Mount Gram introduces a new hero for the Lore sphere and three copies each of nine different player cards. These cards explore a variety of different themes, divided among the different spheres of influence. While Leadership players benefit from a pair of cards that encourage direct action against the Enemy, Tactics players gain a pair of Ent-focused cards, Spirit players gain a new side quest, and Lore players gain two cards that support a new mechanic based around manipulating the encounter deck and the victory display. 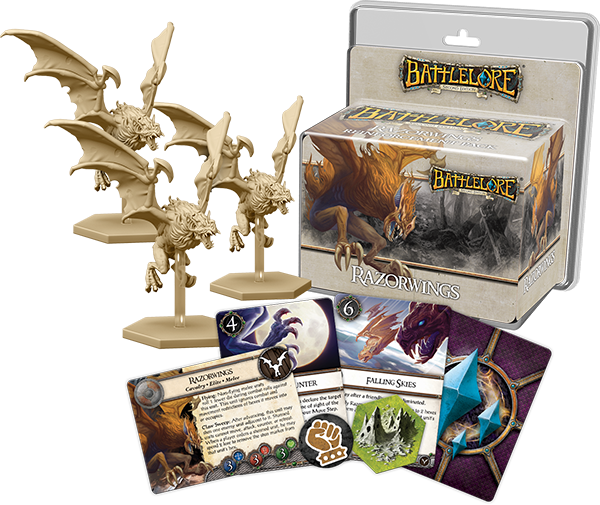 Blackest, moonless night blinded the Daqan troops as they marched forward. Safety lay just across the field, but on all sides they could see the distant fires of the Uthuk Y’llan and hear the shrill whisper of poisoned arrows. Suddenly a screeching filled their ears, followed by the screams of a wounded man and the thud of his body falling on the cold ground. One of the archers rushed over and knelt by his fallen companion. The dying man lay gasping as blood streamed down his face. “Claws… death… from above…”

Fantasy Flight Games is proud to announce the upcoming release of the Razorwings Reinforcement Pack for BattleLore Second Edition.

Those who dwell in the hills of Terrinoth have long dreaded the nocturnal Razorwings, swift batlike creatures who swoop down from their cavernous lairs and bring sudden death to their unsuspecting prey. Now, these vicious beasts join the range of wild creatures that you can harness as part of your BattleLore army. Razorwings can by utilized by any faction, but you can channel their relentless ferocity in battle and use it to thwart your opponents.

The Razorwings Reinforcement Pack contains three detailed plastic figures, the cards you need to muster this unit in your army, three new lore cards to customize your lore deck, and a new cavern terrain tile. It also includes a pre-built scenario featuring this new unit and offering unprecedented strategic challenges. 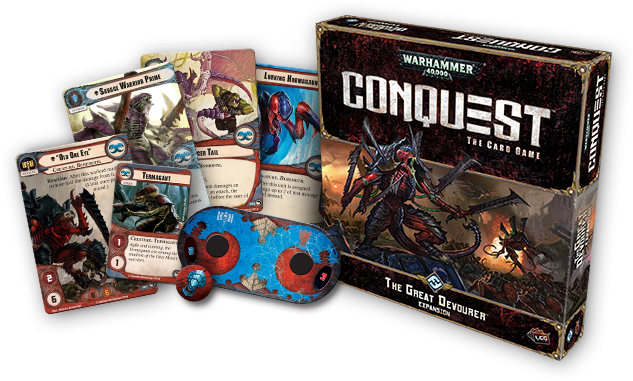 “There is a cancer eating at the Imperium. With each decade it advances deeper, leaving drained, dead worlds in its wake. This horror, this abomination, has thought and purpose which function on an unimaginable, galactic scale, and all we can do is try to stop the swarms of bio-engineered monsters it unleashes upon us. We have given the horror a name to salve our fears; we call it the Tyranid race, but if it is aware of us at all, it must know us only as Prey.”
–Inquisitor Czevak at the Conclave of Har

A new horror approaches – a ravenous species, sweeping through space and filled with an insatiable hunger. This horror is known by many names: the Great Devourer, the Doom of All Things, the Penance of the Elder Gods. To the Imperium, they are the Tyranids – biologically engineered super-predators perfectly adapted to slaughter and harvest new biomass from conquered worlds. Their numbers are legion. Their hunger is as boundless as space itself. Their only goal is to devour and destroy until the galaxy is lifeless and dead. Now, they have come to the Traxis sector.

Two Tyranids warlords lead these horrific creatures into battle, each offering a very different play style. In addition to these warlords and their signature squads, you’ll find a host of new units, supports, events, and attachments to support the Tyranids, including an entirely new type of unit, the synapse unit. The Tyranids aren’t the only ones to benefit from this expansion, however. Every other faction must make its stand against the Great Devourer in the Traxis sector, and brand-new unique characters help them to battle the Tyranid threat.
Posted by ACD Distribution at 2:30 PM