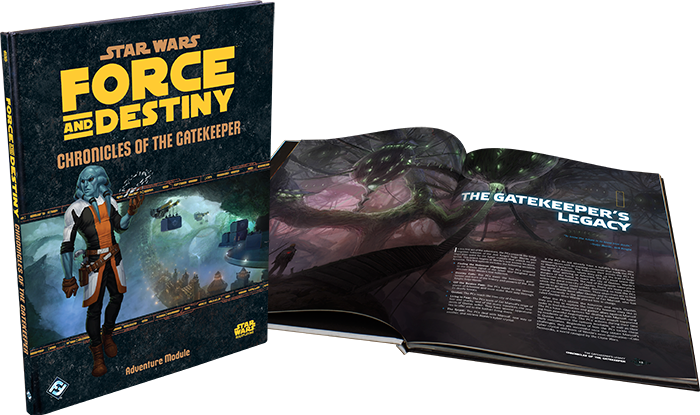 “If you choose the quick and easy path, as Vader did, you will become an agent of evil.”
–Master Yoda

Fantasy Flight Games is proud to announce Chronicles of the Gatekeeper, an adventure supplement for the Star Wars: Force and Destiny roleplaying game.

It is a dark time for those strong in the Force. Lacking the Jedi Order to guide them, Force-sensitives wander the galaxy, persecuted by the Empire and vulnerable to the lure of the dark side, searching for the remnants of Jedi teaching that are scattered across the stars. In Chronicles of the Gatekeeper, the holocron of a mysterious, vanished Jedi Knight surfaces. Its Gatekeeper offers to instruct you in an incredible Force power, if you’re willing to follow where the holocron leads. But great power is always a double-edged blade, and this power is great enough to corrupt even the most stalwart soul.

This 96-page, beautifully illustrated book introduces locations throughout the Star Wars galaxy, a new playable species, and a wide range of adversaries from local matriarchs and Clone Wars-era droids to sadistic criminals and vicious wild beasts. Designed to be used with the Force and Destiny roleplaying game, Chronicles of the Gatekeeper can also easily be integrated into an Age of Rebellion or Edge of the Empire campaign so that players can explore the theme of the Force, or so that Force-sensitive characters can develop their abilities. 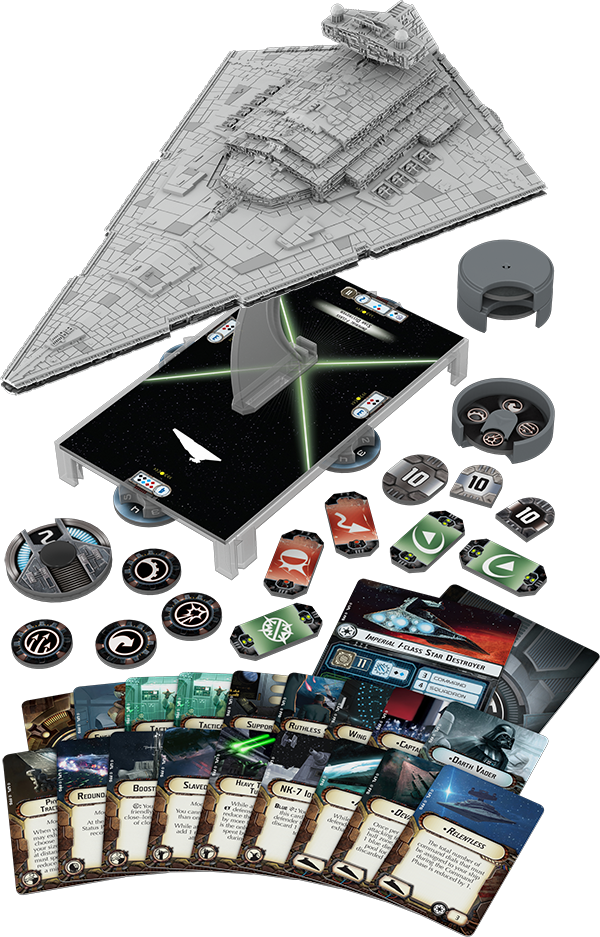 “Only the fighters are attacking…I wonder what those Star Destroyers are waiting for.”
–Lando Calrissian

Moreover, even as it affords you the opportunities to snare your foes with a tractor beam and fly your fleet to battle under the command of Darth Vader, the Imperial-class Star Destroyer Expansion Pack introduces a new type of defense token to your Imperial fleet: the Contain defense token. Featured on both the Imperial I-class and Imperial II-class Star Destroyers, the Contain token can cancel the standard critical effect of a shot that passes through your shields to your hull. Given the devastating nature of many of the critical effects in the Armada damage deck, the Contain token is a valuable tool that you’ll want to spend wisely as you use your Star Destroyers to spread fear throughout the galaxy. 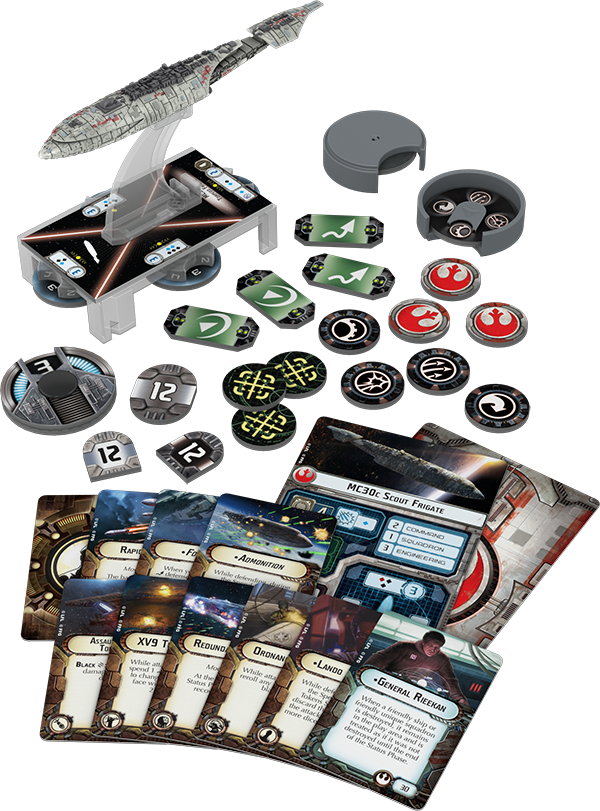 One of the most powerful mid-level ships in the Galactic Civil War, the MC30c frigate was of Mon Calamari design and presented a lethal combination of speed, high-powered armament, and advanced deflector shields. The trade-off, however, was that the ship was relatively light on hull plating. This trade-off becomes evident, as well, in the MC30c Frigate Expansion Pack, which offers this ship to the Rebel Alliance as a fast, nimble, small-size vessel that can fire as many as five attack dice from its left and right hull zones. However, to do so, it must get within close range of enemy ships where its shields won’t long protect it from taking damage against its four hull points.

In addition to its pre-painted MC30c frigate miniature, this expansion pack contains two command dials and ten upgrade cards, along with all the tokens you need to bring this Rebel ship to battle. Of course, as with other Armada expansion packs, the MC30c Frigate Expansion Pack also comes with two ship cards that let you field your MC30c as either the MC30c Scout Frigate or MC30c Torpedo Frigate. Though they share many of the same design elements, the different costs and battery armaments of these two different configurations ensure a wide range of tactical flexibility for your MC30c. 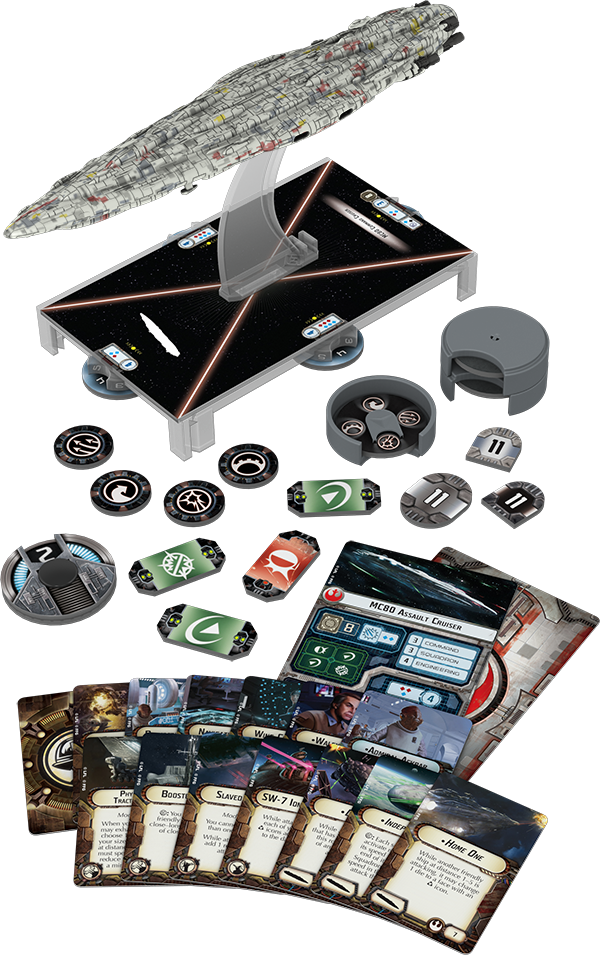 “All craft, prepare to jump into hyperspace on my mark.”
–Admiral Ackbar

Boasting battery armaments of six dice from both its left and right hull zones, the MC80 star cruiser is as hard-hitting as a Victory-class Star Destroyer and the Rebellion’s best answer to the Imperial-class Star Destroyer. Better yet, this Mon Calamari starship is even more powerful when flown under the command of Admiral Ackbar, who can add two red attack dice to any attack made by a starship that fires only from its left and right hull zones during its activation.

Will you race your star cruiser boldly down the middle of the Imperial fleet, firing at enemy ships on both sides? Will you dare your opponent to allow you the use of the Advanced Gunnery objective? Or will you circle the Imperial fleet at a distance, taking shots from a battery armament enhanced by Admiral Ackbar, Slaved Turrets, and the Defiance title? No matter how you bring it to battle, the MC80 star cruiser gives you the muscle to employ a whole new set of tactics in your battles for galactic freedom.

Admiral Ackbar and his flagship star cruiser, Home One, arrive to Armada in the Home One Expansion Pack. Featuring one large-size, pre-painted miniature MC80 star cruiser, two ship cards, three command dials, and fourteen upgrades, the Home One Expansion Pack gives the Rebel Alliance a ship that can trade blow for blow with nearly any Imperial vessel. 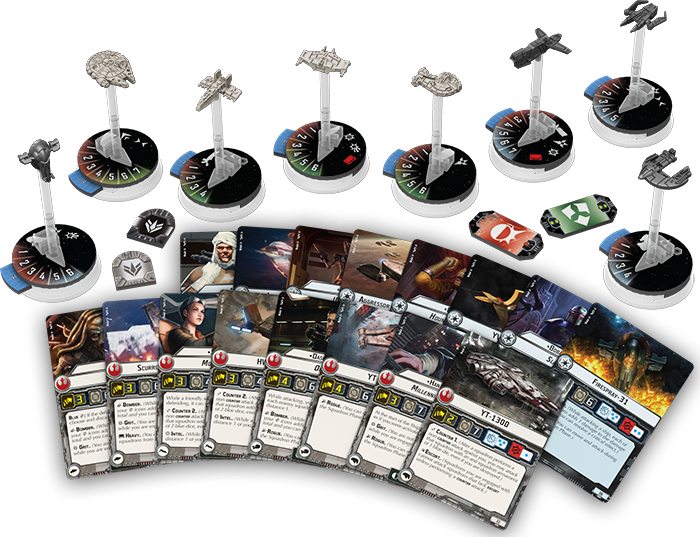 Han Solo, Boba Fett, and a handful of the galaxy’s most notorious rogues and villains race to the battlefield in the Rogues and Villains Expansion Pack for Armada!

Featuring some of the Star Wars galaxy’s best known freighters, patrol craft, and bombers, the Rogues and Villains Expansion Pack introduces eight new irregular squadrons to Armada, each of which can be represented by either a non-unique squadron card or flown by an ace. Like the squadrons from the Core Set and the first wave of expansions, these come unpainted, but are presented in colors that complement their fleets.


Meanwhile, since these squadrons include the signature starships of some of the galaxy’s most individualistic pilots, each is represented by a single miniature, and several of them allow you to take advantage of the new Rogue keyword, which grants a squadron the ability to both move and attack when it’s activated during the squadron phase. Still, that’s not the only new keyword introduced in this collection; both the Grit and Intel keywords appear on a number of its squadrons and introduce new tactical abilities that can help you steer the course of your Armada conflicts. 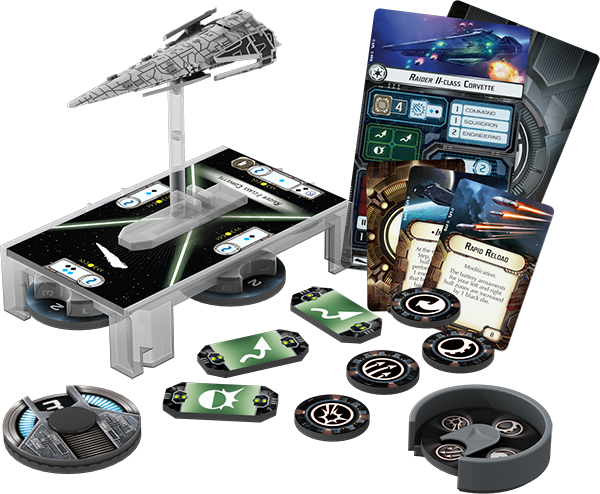 First introduced to the world as a huge starship designed for Epic games of X-Wing, the Raider-class corvette is the Empire’s response to the need for a designated anti-fighter vessel. Its six dual heavy laser cannons are more accurate against snubfighters than the turbolaser batteries of its Star Destroyer cousins, and the disruptive effects of its ion cannon emplacements, along with the efficiency of its localized command, make it a powerful addition to small strike forces.

This potent anti-fighter starship enters Armada in the Imperial Raider Expansion Pack. The second small ship for the Imperial Navy, the Raider is a quick and nimble ship that excels at dealing with pesky starfighter squadrons, but it can just as easily dart across the battlefield to pour concentrated fire into the broadside of a Rebel cruiser. Whether you field your pre-painted miniature as a Raider I-class Corvette or Raider II-class Corvette, the Imperial Raider Expansion Pack offers you plenty of ways to customize it for battle with either squadrons or capital ships. Among its eight upgrade cards, you’ll find Ordnance Experts, a new commander, Quad Laser Turrets, two unique titles, and more.

Of course, as always, the Imperial Raider Expansion Pack comes with a command dial, speed dial, and all the tokens you need to enter the fray.
Posted by ACD Distribution at 2:30 PM