Revolver: Ambush on Gunshot Trail is the first in a series of expansions to the hit game, Revolver, a unique card game set in the Wild West. This expansion gives the Colonel McReady player greater strategic options through the placement of ambush cards. The Jack Colty player receives new bandits, and both players receive new cards enabling “deck-building” opportunities! 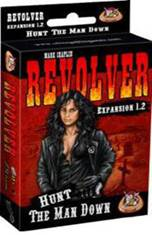 This is the second in a series of expansions to the hit game, Revolver, a unique card game set in the Wild West. It introduces two new icons to the game, a new winning condition for the McReady player, and a new location, “The Prison”, from which the Colty player may decide to free his ally. The method for resolving the jailbreak is unique compared to the other battlefields and does not lengthen the game. Also included are new cards for both players enabling “deck-building” opportunities! 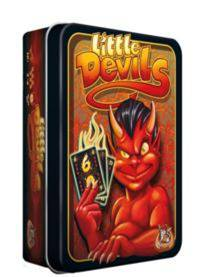 In Little Devils, you try to saddle the opposing players with negative points, which appear as “little devils” in various quantities on the cards that you play. For each “little devil” that you can force an opponent to take, he or she will score one penalty point. But take care: you will not escape the ‘diabolical’ plans of your opponents either, who are sending the “little devils” your way too! Little Devils is a devilishly fun, tricktaking card game that you want to keep on playing! 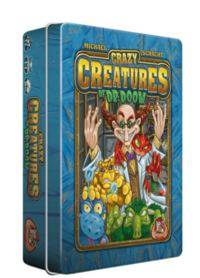 Strange noises are heard from the Mad Mansion of Doctor Gloom! Clouds of all colors come out of the chimney, and people tell weird stories about wild creatures seen in the forest around the mansion. Doctor Gloom is creating the world's craziest creatures ever seen! In Crazy Creatures of Dr. Gloom, players try to get rid of all of their cards, since cards remaining in your hand score penalty points at the end of a round. The player with the fewest penalty points at the end of the game wins… and becomes Doctor Gloom's new apprentice!

You are a noble builder settling the country in Milestones! Players work together to build roads, create marketplaces and erect houses. With each milestone set along the way, they move further into the country. However, while building the country together, each is on his own to procure building materials, money and grain! Builders must cleverly optimize their strategy to get these resources. The player who grabs the most valuable building sites will surely win the game!
Posted by ACD Distribution at 10:53 AM