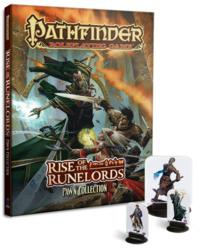 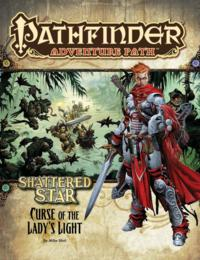 “Curse of the Lady's Light” is a Pathfinder Roleplaying Game adventure for 4th-level characters. This volume continues the Shattered Star Adventure Path, in which players explore dungeons and wilderness in search of a powerful artifact. This volume offers additional details on the Mushfens swamps of Varisia and a thorough investigation of the Gray Maidens. New monsters fill the Pathfinder Bestiary, while Bill Ward's Pathfinder Journal fiction explores the seedy underbelly of the scoundrel haven of Riddleport! Each monthly full-color softcover Pathfinder Adventure Path volume contains an in-depth adventure scenario, stats for several new monsters, and support articles meant to give Game Masters additional material to expand their campaign. Pathfinder Adventure Path volumes use the Open Game License and work with both the Pathfinder RPG and the world’s oldest fantasy RPG. 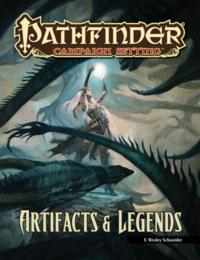 Reveal the godlike powers and secret history of Golarion’s most incredible treasures with Pathfinder Campaign Setting: Artifacts and Legends. Relics from across the Pathfinder Campaign Setting—like the Book of the Damned, Relics of Kazavon, and Seven Swords of Sin—join artifacts of RPG legend—like the Axe of the Dwarvish Lords, Codex of the Infinite Planes, the Dancing Hut of Baba Yaga, and Orbs of Dragonkind—in this collection of dozens of the ultimate weapons, magical creations, life-changers, and world-enders of the Pathfinder Roleplaying Game. Each artifact includes its mythic history, methods of destruction to test even the most powerful heroes, and the world-shaping ramifications of including each in your campaign. Claim the tools of the gods with Pathfinder Campaign Setting: Artifacts and Legends. 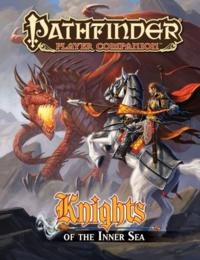 Join the fray as a noble Knight of Ozem, crush the servants of anarchy as a merciless Hellknight, slay the demons of the Worldwound as a veteran Mendevian Crusader, or take up the banner of any of Golarion’s most esteemed knighthoods. Knights of the Inner Sea reveals the most stalwart martial orders of the Pathfinder Campaign Setting, with details supporting crusaders of any class and new options for all manner of knights—be their armor shining or jet black. Recruit a squire customized to your individual quest, make your steed more than just a horse with new mounts and equine breeds, adopt a knightly code of conduct to give your quest a cause, or take up a diverse array of spells and magic items designed empower knights—or destroy them! Whether you’re an armored champion, a militant magic-user, or a slayer from the shadows, launch your character’s crusade with the Pathfinder Player Companion: Knights of the Inner Sea! 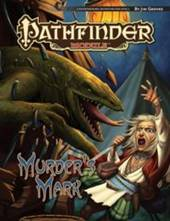 The circus has come to town! But rather than herald a time of festive joy and exotic entertainment, this normally wondrous event instead heralds a sudden rash of violent murders. The victims bear the unmistakable mark of talons on their savaged bodies—and it just so happens that this circus has among its exhibits numerous creatures capable of inflicting such wounds, not the least of which a mysterious sphinx. The folk who run the circus claim innocence, but as the murder spree continues, the town's patience swiftly wears thin and the threat of mob justice looms near. Desperate for aid in a town that's forbidden them to leave before an opportunity for justice presents itself, the carnies turn to adventurers for aid—can they find the culprit before the murderer finds them? This Pathfinder adventure is for a group of four 1st-level characters, and takes place in the heartland of Varisia, a region featured in many beloved adventures including the classic Rise of the Runelords Anniversary Edition and upcoming Shattered Star Adventure Paths. Murder’s Mark is an adventure for 1st-level characters, written for the Pathfinder Roleplaying Game and compatible with the 3.5 edition of the world’s oldest RPG. In addition to the adventure, this volume also features a brand-new monster and a gazetteer of a Varisian carnival suitable for use with any fantasy roleplaying campaign! 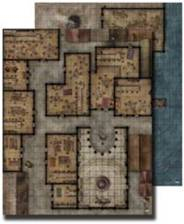 Paint the town red with Flip-Mat: Pub Crawl, a gorgeous double-sided battle-scale map of two tavern-filled street scenes! One side features several bars and taverns in a nice part of town, while the flip-side extends the scene on Flip-Mat: Warehouse to flesh out the seedier side of town! Both sides show interiors and exteriors, for when the inevitable brawls spill out onto the city streets! This portable, affordable map measures 24" x 30" unfolded, and 8" x 10" folded. Its coated surface can handle any dry erase, wet erase, or even permanent marker. Usable by experienced GMs and novices alike, GameMastery Flip-Mats fit perfectly into any Game Master's arsenal!

Posted by ACD Distribution at 5:49 PM