In years when the Protectorate pretended not to possess a standing army, no able-bodied Menite would refuse a call to arms, and the faithful continue to join the crusade even now that the need for secrecy has passed. Armed with their unshakable belief and devastating firebombs, these holy zealots are spurred to combat by a battle priest that girds them with prayers to the Lawgiver. The Holy Zealot unit comes in a box (PIP 32095). A player may field up to three Holy Zealot units for each warcaster in a Protectorate army. SPECIAL NOTE: PIP 32095 contains the same Mk II stat card as PIP 32015. The models in this box represent the same figures in the game. PIP 32095 replaces PIP 32015 and PIP 32016 by offering their contents in a complete unit. The replaced PIPs will no longer be available from Privateer Press beginning September 1, 2012. 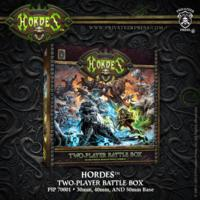 In a World Ravaged by Warfare, Fury is Your Greatest Weapon! From the frozen northern wastes the Legion of Everblight descends upon Immoren, defiling the land with taint and corruption. Dependent upon nature but fueled by its raw and ancient power, the druids of the Circle Orboros clash with the dragon Everblight’s forces to halt the spread of the dragon’s blight. The irrepressible Kaya the Wildborne, flanked by her trusted pack of beasts, leads the Circle’s vanguard against twisted and bloodthirsty ogrun and dragonspawn led by the deadly Lylyth, Herald of Everblight. The HORDES Two-Player Battlegroup Box (PIP 70001) contains everything you need for a two-player game: complete HORDES: Primal Mk II rules in a travel-sized booklet (88 pages), an introductory guide, dice, a ruler, and 20 plastic HORDES models with corresponding stat cards. Circle Orboros Models Warlock Kaya the Wildborne, Feral Warpwolf heavy warbeast, Argus light warbeast, Winter Argus light warbeast, Warpborn Skinwalker unit (5 models) Legion of Everblight Models Warlock Lylyth, Herald of Everblight; Carnivean heavy warbeast; 4 Shredder lesser warbeasts; Blighted Ogrun Warspear unit (5 models) 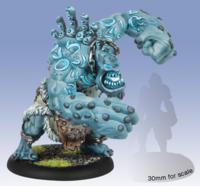 Unlike the many varieties of trolls that prefer to blend into their environments, a storm troll primed with galvanic energy and ready to attack is a blazing beacon of power that intimidates well beyond its size. Deadly lightning erupts from the array of natural conductors that runs the length of its spine, playing along its sides before bolting from its mouth at anything that arouses the troll’s ire. The Storm Troll light warbeast comes in a box (PIP 71061). A player may field any number of Storm Trolls in a Trollblood army. 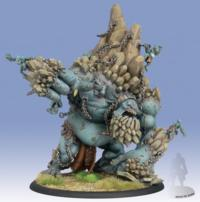 To look upon a mountain king is to see the primal essence of the troll: hunger, rage, and the strength of nature. Set loose upon the world, these great trolls shake the ground with their tread and sunder granite with their roars. Mountain kings, who seek to satisfy an appetite incomprehensible to lesser creatures, now walk Caen again after millennia of imprisonment below the earth. Their awakening can mean only desperation—or madness—on the part of the trollkin. The Mountain King gargantuan comes in a box (PIP 71068). A player may field up to two Mountain Kings for each warlock in a Trollblood army. SPECIAL NOTE: Retailers should note that the Mountain King (PIP 71068) has special in-game interactions with Trollblood Troll Whelps Solos (PIP 71040). Retailers should stock additional Troll Whelps (PIP 71040) in anticipation of the demand the Mountain King (PIP 71068) will create.

Your guide for how to Play Like You’ve Got a Pair. No Quarter Magazine # 44 features a battle report of gargantuan proportions, as Circle Orboros and Trollbloods meet head-to-head, with their new super-sized warbeasts in tow. Also in this issue, Guts & Gears focuses on the terrifying Cryx Kraken, Gavyn Kyle heads to Ios with a revealing dossier on Dawnlord Vyros, and support for the IK RPG begins with the return of the Monsternomicon!

Posted by ACD Distribution at 5:21 PM