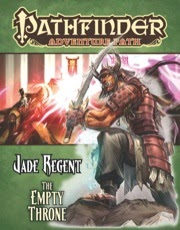 PFA: The Empty Throne
$ 19.99 SRP
SDI
Chapter 6: "The Empty Throne" by Neil Spicer War has come to Minkai! As resistance rises against the Jade Regent's tyranny, the PCs must escort their friend Ameiko to one final site—the Imperial Shrine on a hidden island in the capital's harbor. Here, Ameiko and the PCs must seek the blessing of Minkai's dead emperors if they hope to have a chance to liberate the nation, but even here the Five Storms and the Jade Regent have their influence, and hungry demons and ravenous ghosts must be defeated before the ancestor spirits of the empire will give their blessings. Only then can the PCs take the battle to the Imperial Palace and confront the Jade Regent and his allies in the Five Storms.
"The Empty Throne" is a Pathfinder Roleplaying Game adventure for 14th-level characters. This volume concludes the Jade Regent Adventure Path, a sweeping quest that takes the heroes from familiar territory in Varisia all the way across the ice fields of the Crown of the World to distant Tian Xia, the land of the Dragon Empires. This volume of Pathfinder Adventure Path also features a gazetteer of the sprawling city of Kassai, capital city of the nation of Minkai. Extensive suggestions and support for GMs eager to continue their Jade Regent campaign beyond the end of the adventure are included as well, plus several new monsters drawn from Japanese mythology in the Pathfinder Bestiary, new adventures of Varian Jeggare and Radovan (stars of the Pathfinder Tales novels Prince of Wolves and Master of Devils) in the Pathfinder's Journal, and much more!
Posted by ACD Distribution at 11:00 AM