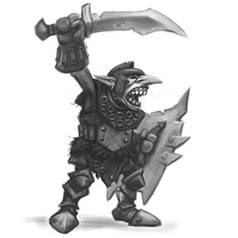 MGCKWO61-1
Goblin Spearmen (10)
$ 24.99 SRP
These Goblins ordinarily carry spears and shields though these items are of little use in the close tunnels of overrun Dwarf citadels where many goblins make their home, and a close second favorite is a curved knife, preferably wielded behind the backs of their enemies. 10 x Metal Goblin Spearmen with command 10 x Plastic Mantic Bases 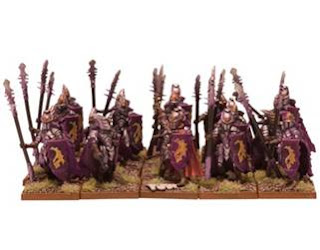 MGCKWV11-1
Twilight Kin Spearmen Troop (10)
$ 24.99 SRP
Unlike their noble cousins, the spears of the Twilight Kin are tipped with wicked barbs, designed to inflict the worst of wounds. No honorable death awaits those killed by the Spearmen of the Night, if they do not die from torn flesh and punctured organs then the poison in which all Twilight Kin weapons are coated will course through the victims body, leaving them twisted and contorted, writing in agony. 10 x Metal/Plastic Twilight Kin Spearmen 10 x Plastic Mantic Bases

MGCKWV13-1
Twilight Kin Shadows (10)
$ 24.99 SRP
The first unit a Twilight Kin warrior joins are the Shadows. Sent ahead of the main force, these small units study the terrain and the enemy’s movements before relaying back to the main camp the layout of the battle to come. On the word of the Shadows has many a battle been won. Armed with poisoned crossbows, they are no less deadly in melee, able to rip open their foes with the jagged tips of their weapons. 10 x Metal/Plastic Twilight Kin Shadows 10 x Plastic Mantic Bases 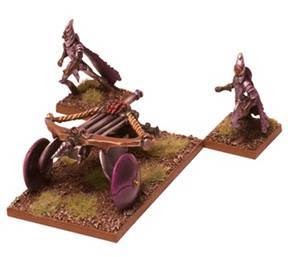 MGCKWV14-1
Twilight Kin Bolt Thrower (10)
$ 19.99 SRP
Named for the reptiles that slither through the caverns of the under-dungeons, the Basilisk bolt throwers of the Twilight Kin launch volley after volley into the heart of the enemy, ripping open huge holes in their ranks into which the spearmen can pour like a crushing wave of darkness. 10 x Metal/Plastic Twilight Kin Bolt Thrower with Crew 2 x Plastic Mantic Bases 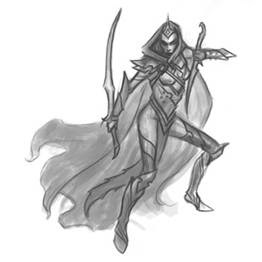 MGCKWV71-1
Twilight Kin Assassin (1)
$ 11.99 SRP
From the shadows they strike. Armed with all manner of arcane sorcerers weaponry, the Assassin patiently observes their victims, infiltrating the battlefield until the right moment to strike appears. Once the deed is done, their nimbleness mixed with dark magic keeps them safe from retaliation. To have a Twilight Kin sent against you is a death warrant from which few ever survive. 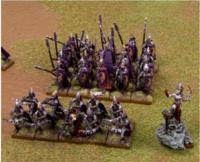 MGCKWV82-1
Twilight Kin Laelchi Shadowhost Army (62)
$ 174.99 SRP
Twilight Kin are Elves for the most part; depraved, tainted souls that kill for pleasure. Mixing their Elven brethren's battle prowess with a viciousness that is only rivaled by the hatred of the Abyssal beings the Twilight Kin ally with on the battlefield, these dark Elves employ the use of stealth, speed and an unhealthy use of poison when they march to war.