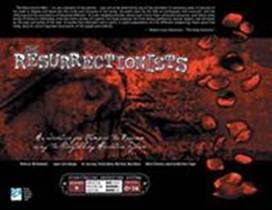 WWP25033
Vtr: The Ressurectionists
$ 19.99 SRP
The Resurrection Man — to use a byname of the period — was not to be deterred by any of the sanctities of customary piety. It was part of his trade to despise and desecrate the scrolls and trumpets of old tombs, the paths worn by the feet of worshipers and mourners, and the offerings and the inscriptions of bereaved affection. To rustic neighborhoods, where love is more than commonly tenacious, and where some bonds of blood or fellowship unite the entire society of a parish, the body-snatcher, far from being repelled by natural respect, was attracted by the ease and safety of the task. To bodies that had been laid in earth, in joyful expectation of a far different awakening, there came that hasty, lamp-lit, terror-haunted resurrection of the spade and mattock. — Robert Louis Stevenson, "The Body-Snatcher" They say an infamous old vampire is buried in an overgrown old cemetery outside the city. This nefarious bloodsucker was some kind of cult leader back in his nights. Stole mystic secrets from the Sanctified and the Acolytes alike and eventually went into hiding — in torpor — back in the '30s or '40s. But his hiding spot was lost, even by his own cult... until tonight. You've got the only known clues to his whereabouts, a sealed box containing some thing of his that will supposedly wake him up, and one night to find his grave, dig him up and bring him back to the city. Get to it. Tonight, you're the Resurrectionists. This release is part of White Wolf's Storytelling Adventure System.
Posted by ACD Distribution at 9:53 AM