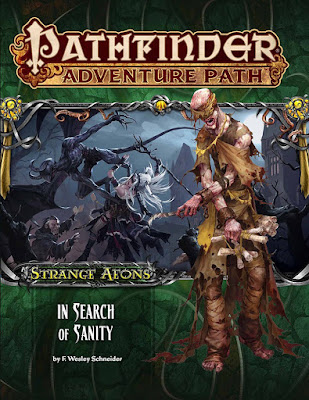 In a distant land polluted by an alien menace from beyond the stars, a great cancer grows within the earth. As its tendrils reach out through the dreams of those who learn and study its existence, a sinister cult grows more active in preparing the way for a devastation that will destroy more than the minds of would-be heroes. Can the adventures reclaim lost memories in time to stop the advance of a cataclysmic contagion that could threaten all of Golarion? Can they resist the mind-shattering truths revealed by the Yellow Sign, and the monstrous force it symbolizes? The Strange Aeons Adventure Path pits the heroes against the cosmic horrors of the Cthulhu Mythos, with new monsters, mind-shattering terrors, and explorations far beyond the known lands of Golarion.

The adventurers awaken within the walls of the eerie Briarstone Asylum, their minds wracked and memories missing. As they work together to recover their missing time, they soon learn that the cause of their eerie amnesia is but a symptom of a much greater cosmic menace. As they struggle to retain their sanity, the heroes must ally with other asylum residents and fight against the monstrosities that have taken over the asylum and plunged it into nightmare. Can the adventurers defeat the terror that stalks the halls and free themselves from their prison of madness?

“In Search of Sanity” is a Pathfinder Roleplaying Game adventure for 1st-level characters. The adventure kicks off the Strange Aeons Adventure Path, a twisted delve into madness that pits the heroes against the cosmic horrors of the Cthulhu Mythos. Several new monsters, details on the Mythos, and the first installment of a new Pathfinder’s Journal round out this volume of the Pathfinder Adventure Path! 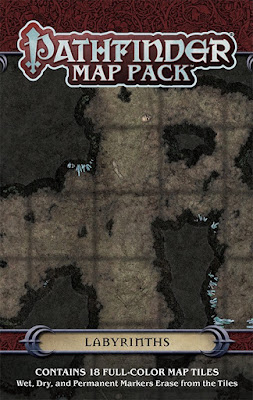 Find a path through a twisting maze! Pathfinder Map Pack: Labyrinth contains 18 full-color 5 x 8-inch map tiles, stunningly crafted by cartographer Jason A. Engle, that combine to create a twisting turning labyrinth within your dungeon. You can confuse your players and fill the befuddling corridors with dangerous foes!

Wet, dry, and permanent markers erase from the tiles! With revised packaging that includes a reusable box for easy storage, Map Packs have never been so useful! 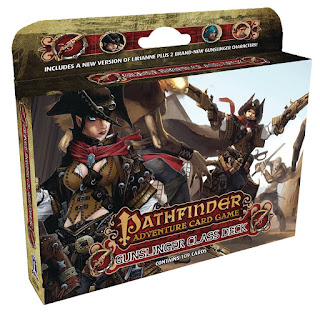 With Deadly Aim! Gunslingers wield the secrets of black powder to loud and deadly effect. The Gunslinger Class Deck accessory for the Pathfinder Adventure Card Game allows players to bring these brash soldiers to any Base Set, including the scorching sands of the upcoming Mummy’s Mask campaign!

The 109-card Gunslinger Class Deck contains three new characters—including a new version of the iconic gunslinger Lirianne—and both new and familiar weapons, armor, items, and other boons that will launch your gunslinger through an entire Adventure Path. This deck can also be used in the wildly popular Pathfinder Society Adventure Card Guild organized play campaign. 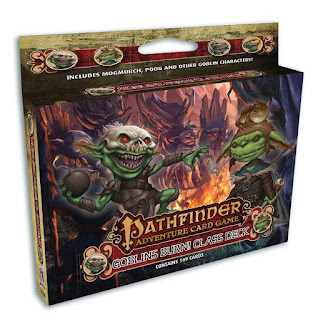 BURN, BURN, BURN! Not content to cut and fight, these goblins are ready to set fire to your gaming table in the new Goblins Burn! Class Deck. Poog of Zarongel and his friends are paired with enough spells, bombs, and (even more) lucky pet toads to singe, char, and gobble your way through any Pathfinder Adventure Card Game Base Set with this 109-card accessory deck. This deck can also be used in the popular Pathfinder Society Adventure Card Guild organized play campaign. 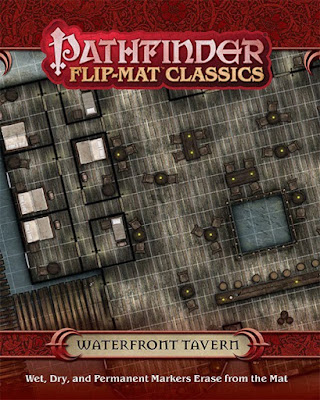 The most-popular Pathfinder Flip-Mats in history return! These fan-favorite maps feature versatile adventure settings - city streets, forests, ships, taverns, and more - and now, with Flip-Mat Classics, they're back for a repeat performance. Durable and lavishly detailed, these essential adventure set pieces are sure to bring excitement to your game table for years to come! 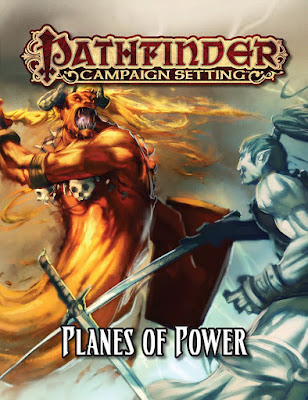 (Cover art not yet finalized)

The elemental forces of air, earth, fire, and water are among the most powerful in the multiverse, forming the basis of the material world and giving spellcasters and creatures capable of wielding them immeasurable influence. Now players and Game Masters can harness these powers for themselves by exploring the elemental planes—entire realms of existence dedicated to the four elements—in Pathfinder Campaign Setting: Planes of Power. Each of the four elemental planes is fully detailed like never before, with advice on adventuring in their harsh environs, new spells and character options, location gazetteers, and a thorough examination of a major settlement that offers a welcoming landing site for travelers from other planes (such as explorers in the Pathfinder Society Organized Play campaign). 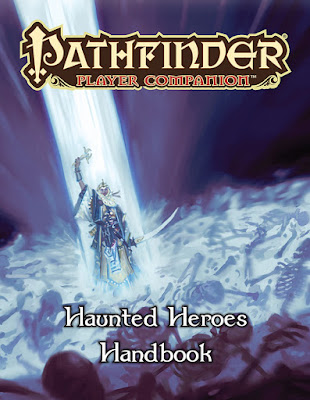 (Cover art not yet finalized)

Death is not the end! In a world filled with undead, resurrection, and beings from beyond the mortal plane, long-dead mistakes can still cause problems for the living—or provide opportunity. Pathfinder Player Companion: Haunted Heroes Handbook takes aim at possessing forces of all sorts, from worldly magic to spirits of the dead, and provides you with options to rid yourself of that influence, take back control, or profit by cunning bargains with forces in need of a mortal vessel. This handbook also provides valuable information on the places, organizations, and faiths especially concerned with spirits, hauntings, and possession, and how any of these can affect your outlook and abilities.

32 pages, Softcover, Full color.
Posted by ACD Distribution at 8:57 AM