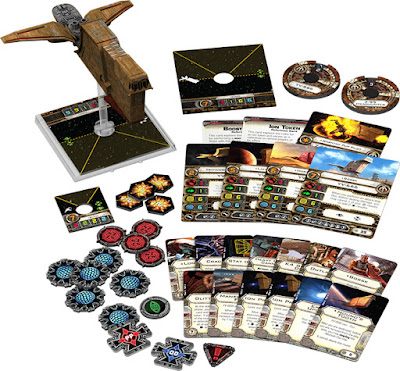 The Hound’s Tooth Expansion Pack gives life to the infamous Trandoshan bounty hunter Bossk and his signature YV-666 light freighter, introducing them to X-Wing as part of the Scum and Villainy faction. Rendered at the game’s standard 1/270 scale, the YV-666 light freighter is a towering, large-base starship that features three attack, six shields, six hull points.

The rules for deploying the Nashtah Pup are covered in the expansion’s rulesheet, which also introduces a new mission, Hunting the Hunter.

This is not a complete game experience. A copy of the X-Wing Miniatures Game Core Set is required to play with these products. 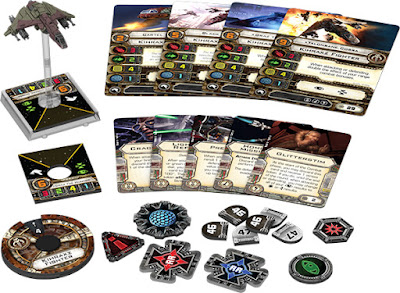 Modeled after Incom’s popular X-wing starfighter, the versatile Kihraxz was developed specifically for the ace Black Sun pilots who demanded a nimble, powerful ship to match their skills.

The Kihraxz Fighter Expansion Pack brings this fighter to X-Wing as a well-rounded, small-base, Scum and Villainy starship with three attack, two agility, four hull, and one shield, carefully pre-painted and sculpted at the game’s standard 1/270 scale.

Additionally, the Kihraxz Fighter Expansion Pack comes with four ship cards, five upgrades, a maneuver dial, and all the tokens you need to fly this fighter into any battle in which the galaxy’s Scum have a vested interest. 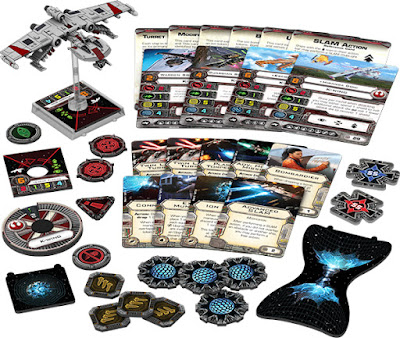 The K-wing Expansion Pack for X-Wing introduces the K-wing, a heavily armed Rebel bomber that could double as an escort or reconnaissance vessel.

In X-Wing, as in Star Wars lore, the K-wing’s surprising acceleration, heavy armor plating, and devastating ordnance make it an outstanding ship for hit-and-run operations. One of the game’s most durable small-base fighters, the K-wing features four shields and five hull, along with a primary turret weapon with an attack value of “2.” On top of this, the ship comes with the new SLAM action, which allows it to race across the battlefield and deploy its bombs at an unprecedented speed.

In addition to its pre-painted K-wing miniature, sculpted at 1/270 scale, the K-wing Expansion Pack comes with four ship cards and nine upgrades that feature a massive armament of new missiles, bombs, and torpedoes, as well the Extra Munitions upgrade, which dramatically improves the efficiency of your ordnance. 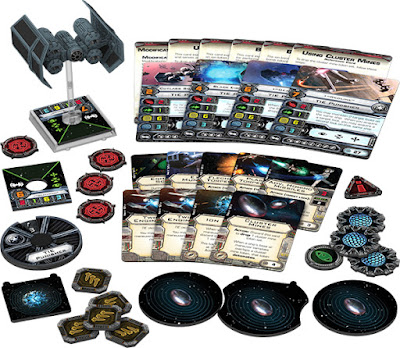 The TIE Punisher Expansion Pack for X-Wing bolsters the Imperial Navy’s ranks with one pre-painted miniature TIE punisher, a beefier version of the TIE bomber with shielding, a second bomb chute, and three additional ordnance pods, each equipped with a twin ion engine.

Sculpted at the game’s standard 1/270 scale, the TIE punisher arrives to your table along with four ship cards and a punishing array of nine explosive upgrades, with which you can obliterate your enemies.

Like the K-wing Expansion Pack, the TIE Punisher Expansion Pack comes with the Extra Munitions upgrade, allowing you to make the most of your TIE punisher’s two torpedo slots, two missile slots, and two bomb slots. Even though you’re not likely to utilize all these slots, they offer you a tremendous measure of flexibility as you look for the ordnance that’s likely to best suit your squad.

Not only can it carry a slightly larger payload than the TIE bomber, the TIE punisher invites Imperial players to perfect their bombing skills by taking advantage of both its innate boost action and its ability to equip a system upgrade like Advanced Sensors. With Advanced Sensors, the TIE punisher can boost into position to drop a bomb right in front of an enemy fighter, and then it can immediately perform its maneuver to fly away.
Posted by ACD Distribution at 2:30 PM