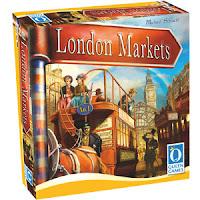 London, 19th century: Under Queen Victoria's reign, trade of exotic goods in the United Kingdom has blossomed, with china, soap, silk and coffee being traded for top prices at London's markets. Be sure to get your share of the profits to become the most renowned merchandiser in London.

To make more profits than anyone else at London's markets and secure their position as the city's most renowned merchandiser, players need to organize their goods cleverly in order to control their goods replenishment and their personal income.

Through clever use of the merchants and assistants at the different markets, in addition to smart acquisition of goods at the daily auctions, you'll earn the profits you need to win the game! 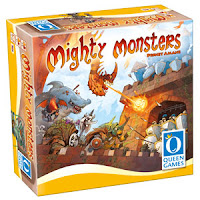 King Edgar's castle and especially his treasury is the main target for the mighty monsters, if it weren't for those pesky guards trying to protect the treasures.

The players assume the roles of Trolls, Undead, Aquatic animals, Demons, Insects and Dragons with only one thing on their mind… the Gold in King Edgar's treasury. You have to cooperate to overcome the pesky guards, but the real monster in you still wants a bigger share than your fellow monsters! Have the most gold in the end and be the winner in this fast paced monstrous card game. 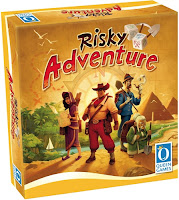 Players embark on expeditions and try to find rare artifacts in an undiscovered world. Each player assumes the role of three adventurers trying to roll the right dice combination to get equipment, artifacts and to find new and mysterious places. The trick: players have to mark the things they want to roll for with their adventurers, before they actually roll the dice. Assessing the risk, using the right equipment and finding the best locations to place the adventurers will be key to win a game of Risky Adventure. 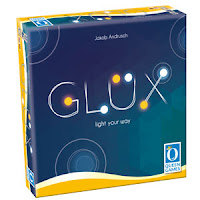 You try to place your light chips inside the rooms on the board to illuminate as many of them as possible. The game's ingenious laying mechanism allows many tactical options to give your opponent a hard time. Choose the "right" side of the light chips and find the best ways to illuminate the rooms and you will win. 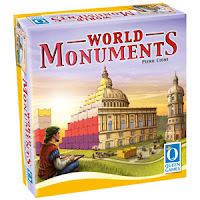 Dive into the world of master builders and construct their "World Monuments" of historic significance.

In each game you and your fellow players choose one of four buildings and start constructing it from the ground up: The Capitol in Washington, the cathedral Notre Dame in Paris, the basilica San Pietro in Rome or the mausoleum Taj Mahal in Agra. Only the most talented master builder among the players gains many points and has a chance of winning the game, after the building is completed. 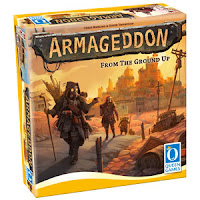 In a harsh post-apocalyptic world right after the Armageddon–can you rebuild society?

Players build their own new towns out of the debris for their survivors to live in. But not everyone out there is friendly: marauders would rather pillage your town and see it burn. So scavenge what you can, build new structures, and defend against the marauder threat. Finding more survivors to come to your town will mean getting more done, but be careful, you must be able to house them all, or they may turn against you and join the marauders! 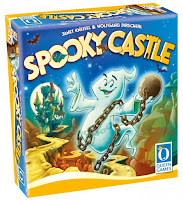 Spooky Castle, a mag(net)ical, cooperative, and communicative gaming adventure. Alternatively, you assume the role of Spooky. To do so, the player gets blindfolded by putting on the Spooky-mask, and pokes around in Spooky Castle with the magnetic bar. The fellow players give useful instructions, thus seeing him through the castle in search of the magic items inside. But beware: there are also some adult haunting ghosts lurking within the Ghostly Castle, and time is running short. 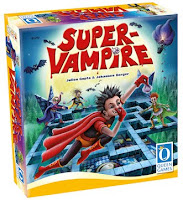 An eerie but beautiful game about super vampires!

The evildoer Dr. Garlic has set his evil plan in motion to put garlic everywhere in the freshly cleaned crypt! That means it is time to hurry and get rid of all the garlic before sunrise. Luckily super vampires keep special garlic eating pets, called "Gorlocs" inside their towers. But Gorlocs don't like to run or walk or do just about anything other than eat garlic. So it is your task to fly around the crypt and collect all the garlic to bring it back to the tower before sunrise.

Posted by ACD Distribution at 3:41 PM

Email ThisBlogThis!Share to TwitterShare to FacebookShare to Pinterest
Labels: board, board games, januay, queen, queen games