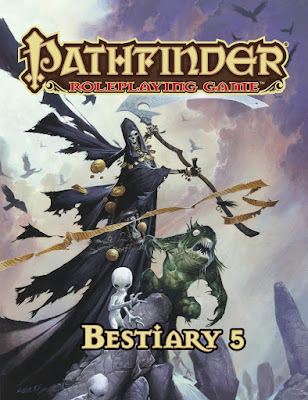 Terrors of the Mind! Face off against creatures that threaten your body and soul! Inside Bestiary 5 lurk hundreds of new monsters ready for use in the Pathfinder Roleplaying Game. You’ll find the death-dealing grim reaper, menacing deep ones, and the ground-shaking wood colossus. Alongside such terrors, there are also allies to be found, such as the whimsical leshi, the inscrutable esoteric dragons, and the powerful aerial servant!

This imaginative tabletop game builds upon more than 10 years of system development and an Open Playtest featuring more than 50,000 gamers to create a cutting-edge RPG experience that brings the all-time best-selling set of fantasy rules into the new millennium. 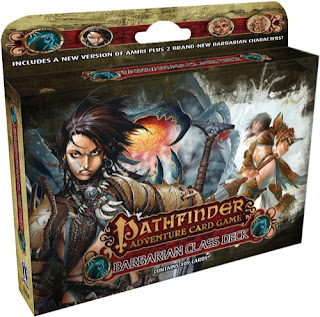 Channel your Fury! Barbarians wield massive weapons and their own rage to create a potent and deadly combatant. The Barbarian Class Deck accessory for the Pathfinder Adventure Card Game allows players to bring these unpredictable warriors to any Base Set, including the demon-infested Wrath of the Righteous campaign!

The 109-card Barbarian Class Deck contains three new characters - including a new version of the iconic barbarian Amiri and both new and recognizable allies, weapons, armor, and other boons to support your barbarian through an entire Adventure Path. This deck can also be used in the popular Pathfinder Society Adventure Card Guild organized play campaign. 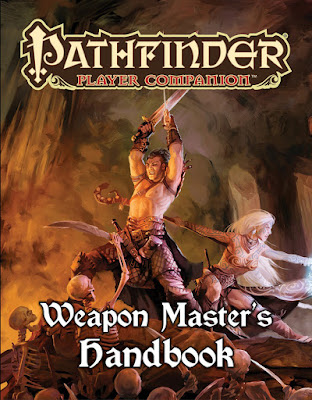 Being proficient with a weapon is a good start, but you can become a true artist of combat with the secrets of the Pathfinder Player Companion: Weapon Master’s Handbook!

Also featuring new feats, magic items, archetypes, and expanded options for the stamina and combat trick rules first presented in Pathfinder RPG: Pathfinder Unchained, this player-friendly volume contains everything you need to become a master with any conceivable weapon! 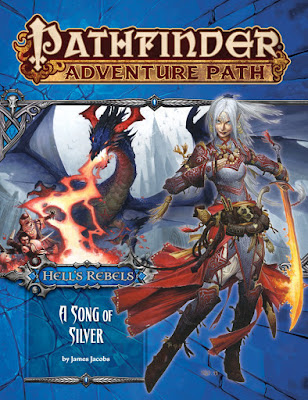 The 100th volume of the Pathfinder Adventure Path! The time has come to take back the Silver City of Kintargo! Too long has the diabolic Lord-Mayor Barzillai Thrune inflicted upon his citizens cruelties and increasingly oppressive laws.

In “A Song of Silver,” the heroes of the beleaguered city finally strike back, and as their rebellion mobilizes in the city streets to stand against the corrupt government’s minions, the heroes themselves must strike at the sources. Rescuing old heroes from forgotten prison cells, reclaiming control of historic and key locations, and the performance of an ancient song that was used years ago to protect the city from Hell’s agents are but the preamble for the decisive battle, an assault on the enormous Temple of Asmodeus!

“A Song of Silver” is a Pathfinder Roleplaying Game adventure for 10th-level characters. The adventure continues the Hell’s Rebels Adventure Path, an urban- and political-themed campaign that focuses on a rebellion against one of the Pathfinder Campaign Setting’s most infamous nations - devil-haunted Cheliax.

In celebration of the Adventure Path’s one-hundredth volume, this special over-sized installment also features several new monsters, revelations about the dead god of humanity - Aroden, a brand new Pathfinder Journal, a poster map depicting a key battlefield in the adventure, and a huge retrospective of the prior 16 Adventure Paths wherein additional never-before-statted NPCs for each are presented in full detail, both to expand the options of previous Adventure Paths or to provide new friends and foes for Hell’s Rebels and all the Adventure Paths to come! 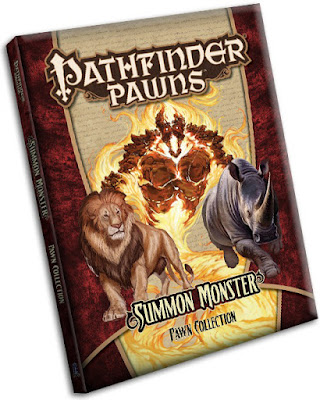 Summon legions of extraplanar creatures to your tabletop with this collection of more than 100 creature pawns for use with the Pathfinder Roleplaying Game or any tabletop fantasy roleplaying game!

Printed on sturdy cardstock, each pawn contains a beautiful full-color image of a monster from the summon monster spell lists in the Pathfinder Roleplaying Game Core Rulebook. Each card stock pawn slots into a size-appropriate plastic base from the Pathfinder Pawns Bestiary Box, making them easy to mix with traditional metal or plastic miniatures.

With multiple pawns for commonly summoned creatures, the Summon Monster Pawn Collection is the best way to ensure you’ve got the perfect monsters to conjure for every Pathfinder Roleplaying Game encounter! 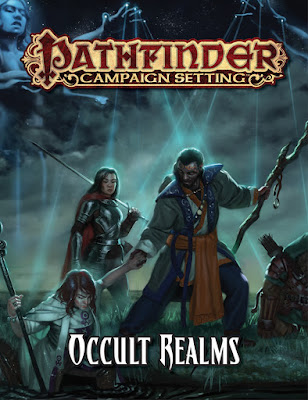 New occult powers designed to complement the new classes presented in Pathfinder RPG Occult Adventures help members of psychic classes customize their characters through story-based accomplishments, and new rituals tied to the organizations, history, and gods of the Inner Sea region allow non-psychics to create powerful occult effects. More than a dozen locations rife with occult adventure potential are detailed within, including sites in Hermea, Jalmeray, Numeria, and Razmiran, as well as sites on other planets and planes of existence.

No occult-themed campaign in the Pathfinder campaign setting is complete without Occult Realms! 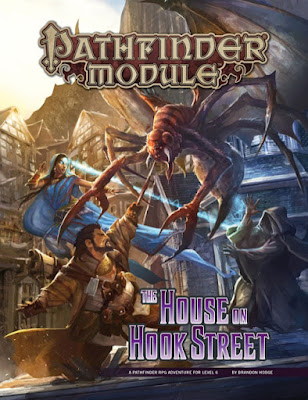 Dreams turn deadly in Old Korvosa! Nightmare-spawned horrors begin stalking the district’s shiver addicts, sparking a manhunt to bring those responsible to justice. What role does the strange cult known as the Brotherhood of the Spider play in the mysterious deaths, and why has the veil between the dreaming and waking worlds worn so thin?

To solve these mysteries and others, the heroes must walk the unseen paths of Bridgefront’s occult underworld, and even enter the Dimension of Dreams itself to unravel the web of intrigue around the cult’s dangerous machinations. But what happens when the heroes’ own dreams turn against them, and can they uncover dark esoteric secrets too terrible to know before it is too late?

Designed for use with Pathfinder Roleplaying Game: Occult Adventures, “The House on Hook Street” is packed with terrifying thrills! 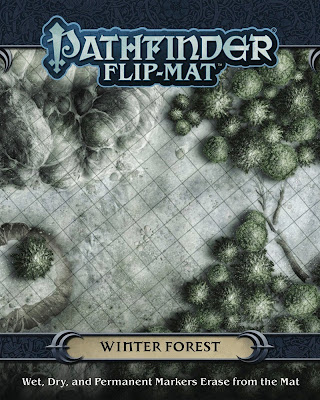 When the heroes encounter frost giants in the depths of a frozen forest, no Game Master wants to spend time drawing every single tree, rock, and snow bank. Fortunately, with Paizo Publishing’s latest Pathfinder Flip-Mat, you don’t have to!

This line of gaming maps provides ready-to-use and captivatingly detailed fantasy set pieces for the busy Game Master. This double-sided map is perfect to use when the heroes need to set up a cold camp or have just wandered into the haunt of some frost-bitten undead.

Don’t waste your time sketching when you could be playing. With Pathfinder Flip-Mat: Winter Forest, you’ll be ready next time your players venture into the frigid wilderness.
Posted by ACD Distribution at 2:30 PM