New from Game Salute! VivaJava: The Dice Game, Belle of the Ball, OTONTIN: Warriors of the Lost Empire and A Duel Betwixt Us! 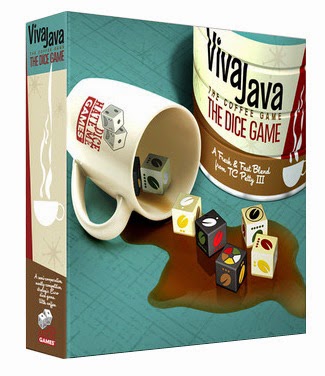 Just like in the original VivaJava board game, in VivaJava Dice, players take on the roles of employees at the VivaJava CoffeeCo., scouring the globe for the best beans to keep the company on top while trying to keep themselves one step ahead of the rest of the executives.

VivaJava Dice puts a quick, new twist on the crucial decision of the game: the choice between blending beans or research. Players may now use the dice in their pool to blend - using the beans to create a best-seller for quick points, then deciding whether to press their luck in subsequent rounds for bigger points but fewer dice as the blends degrade. Or they can choose to research, which involves using their valuable beans to gain an ever-changing variety of dice-manipulating abilities, new ways to score, and paths that lead to aiding a competitor for a later payoff or hindering that competitor for immediate gratification. VivaJava Dice also offers a unique system of cooperative dice-rolling that can help you rise to the top, but at the price of someone else riding your coattails.

With an astounding mix of plug-and-play research abilities, subtle social play in semi-cooperative mode, and the chance to hog all the glory and blend the best for yourself, VivaJava Dice is all about choice, making each game fast and furiously different. 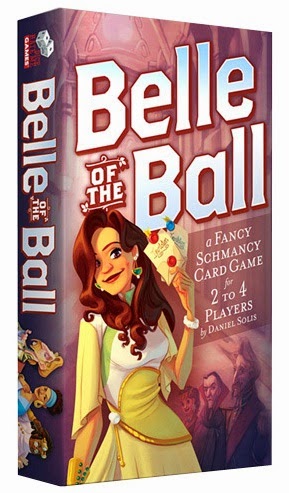 It is the eve of Carnivale on the magical Victorian isle of Ludobel, and you are all invited to the fantastical festivities!

In the card game Belle of the Ball, players take on the roles of party hosts, seeking the best mix of guests to make their gala the greatest by the end of the night. In order to ensure that they stay one step ahead of the other hosts, players will have to carefully watch the growing line of guests at the door, inviting those in that seem to share passions with partygoers already inside, all the while handing out their precious stash of Regrets to those who should seek refuge elsewhere. Of course, other hosts may find it advantageous to invite a rejected guest inside just to collect their accumulated Regrets for later use.

Hosts may also choose to ignore the competition for guests and instead try to earn the favor of the Belle of the Ball herself, whose charms can make or break any party. 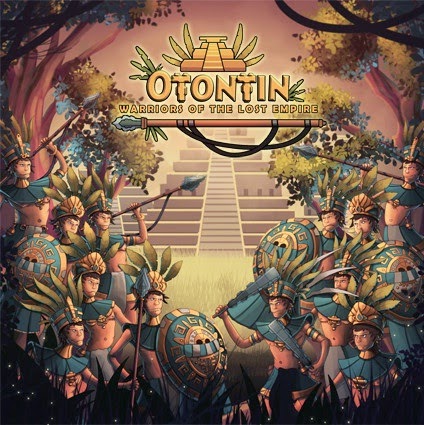 In OTONTIN, players are ferocious Aztec Warriors forming and destroying alliances as they rise to power within the Empire.

Each turn is played in three phases: Campaign, Strategy and War. During the Campaign phase, players roll dice to determine their wealth and military strength. They then negotiate with other players during the Strategy phase, secretly joining alliances or giving Attack or Defense orders via Tactic Cards that are played faced down.

During the War phase, Tactic Cards are revealed and battles commence! The game ends when a player’s stronghold is worth 20 cocoa beans.

OTONTIN is a volatile card game for 3-8 players, ages 10 and up. 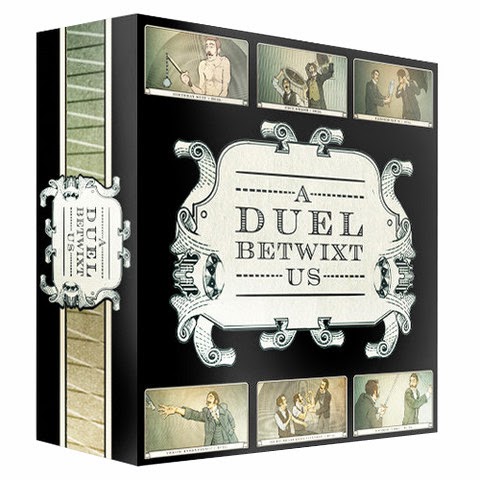 A Duel Betwixt Us is a two-player card game designed to test your manly worth through the ancient and sacred art of violence. Your heroic feats will earn you the love of fair maidens, and sturdy men will join your ranks in admiration of your combative prowess.

You will send this fanclub to work in the mines, where they will toil tirelessly in your name. The fine ingots they pull from the earth will provide you with an economic and military edge in the series of spectacular duels which will unfold betwixt you and your nemesis.

Who will be the finer specimen of Man? Will you gain the Gentlemanly Satisfaction you demand? Only time will tell...

Each player begins with 5 miners. Each turn, assign one idle miner to either the copper, silver, or gold mines. One miner can dig out a single copper, whereas two are required to mine a silver and three for a gold. Spend resources on strategic events or nefarious tricks, or use them to craft weapons and armor. At the end of each turn, you may declare DUEL on your foe to attempt to win either the fair maiden’s favour or the adoration of more fans (who you will inevitably send to work in the mines).