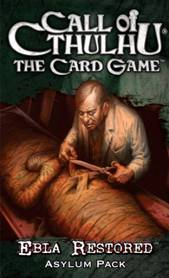 FFGCT55
CoC LCG: Ebla Restored
$ 14.95 SRP
SDI
Knowledge stolen from the ruins of an ancient city now steers the fate of the world. The third Asylum Pack in the Revelations cycle for Call of Cthulhu: The Card Game, Ebla Restored adds to the cycle's focus on the power and dangers of eldritch knowledge. Its new cards promote exciting new synergies between dark Tomes and the daring Relic Hunters who seek them. Meanwhile, players gain unprecedented control over their decks and discard piles, finding new ways to work with lost knowledge. Will the forgotten secrets of ancient Ebla provide you the answers you need to stymie your foes? Will humanity tremble before the terrifying might of the Ancient Ones restored to their former glory, or will heroic investigators and scientists thwart them and their zealous cultists to maintain sanity, at least for another day? 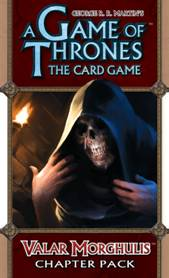 FFGGOT84
GoT LCG: Valar Morghulis
$ 14.95 SRP
SDI
The first Chapter Pack in the Beyond the Narrow Sea cycle for A Game of Thrones: The Card Game, Valar Morghulis transports players to the massive and diverse Eastern continent of Essos with characters, locations, and events drawn from George R.R. Martin’s A Feast for Crows and A Dance with Dragons. Players gain fantastic options for exciting new strategies, including versatile decks that start without agendas. New locations reduce the “out of House” gold penalties for characters, making thematic Trait-based decks more viable than ever, and new River plots build upon each other to create interesting and increasingly powerful strategic options. Beginning a cycle intended to welcome new players while providing veterans with exciting challenges, Valar Morghulis is an excellent second purchase for players looking to expand upon the Core Set! 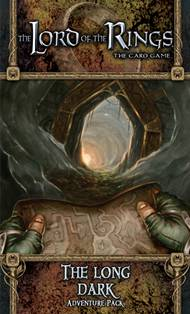 FFGMEC12
LotR LCG: The Long Dark
$ 14.95 SRP
SDI
After a brutal conflict outside the gates of Moria, several of Middle-earth's heroes press forward into the dark, Dwarven mines to scout the ancient tunnels for the source of the increased Orc activity in the Misty Mountains. The way is dark and choked with foes and hazards… The Long Dark continues the ongoing narrative of the Dwarrowdelf cycle, adding 60 new cards to The Lord of the Rings: The Card Game, including a new hero and three copies of each player card. Players will also experience an all-new scenario that pits brave heroes against bands of Goblins, the hazards of traveling in the dark, and the risk of getting lost. As Middle-earth’s heroes travel through the dark, underground realm of Moria, they must navigate carefully or suffer the consequences of losing their way. Any wrong turn may result in disaster.
Posted by ACD Distribution at 9:12 AM

Email ThisBlogThis!Share to TwitterShare to FacebookShare to Pinterest
Labels: april, call of cthulhu, fantasy flight, game of thrones, lord of the rings