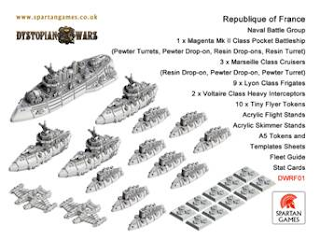 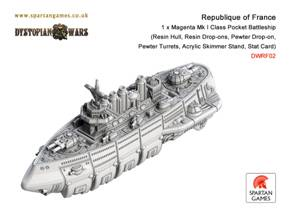 SGCDWRF02
DW RoF: Magenta Mk I Pocket Battleship
$ 21.50 SRP
Republique of France Magenta Mk I Class Pocket Battleship Uniquely, the Surface Skimmer rule allows the Mk I to move over land and water. This is just one of many dramatic benefits of technology ‘liberated’ from the fugitive Markov. The Magenta class Battleship is fitted with the extraordinary Gravity Nullification Engine (GNE), allowing it to operate in the space between surface models and flyers. This Battleship is sure to stand out on the battlefield and will act as a warning to your enemies that the French are a force to be reckoned with. 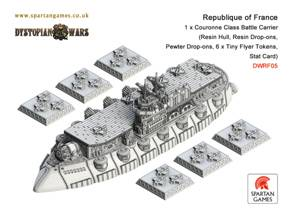 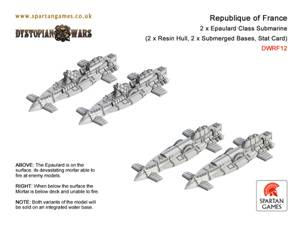 SGCDWRF12
DW RoF: Epaulard Submarine (2)
$ 15.50 SRP
Republique of France Epaulard Class Submarine With the world gripped by crisis, France is ready to seize the chance to regain its rightful place as a great power. Their Epaulard Submarines are built for purpose, armed with long range Mortars and Mines to protect them from the close-range attentions of their traditional hunters. When on the surface its devastating mortar is able to fire at enemy models. When below the surface the mortar is below deck and unable to fire. Both variants of the model will be sold on an integrated water base. 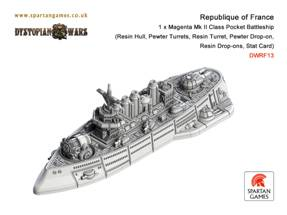 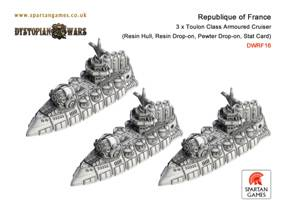 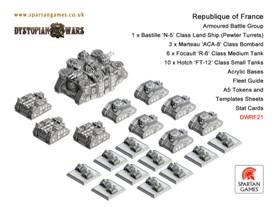 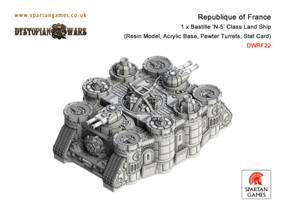 SGCDWRF22
DW RoF: Bastille N-5 Land Ship
$ 21.50 SRP
Republique of France Bastille 'N-5' Class Land Ship The Heavy Assault Command subdivision of the Land Army is responsible for the Republique’s precious Land Ships. They are parceled out to Legions as and when they are needed. Not surprisingly, Legions benefit greatly when this beastly machine is added to the fray. 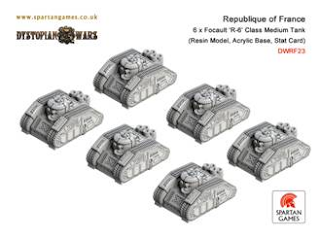 SGCDWRF23
DW RoF: Focault R-6 Medium Tank (6)
$ 12.00 SRP
Republique of France Focault 'R-6' Class Medium Tank The Focault ‘R-6’ Tank is a medium class tank that can deal hefty damage even at longer range. Formidable in war, the might of the Focault is matched only by the ferocity of the Legions that command them. 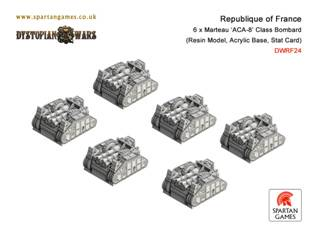 SGCDWRF24
DW RoF: Marteau ACA-8 Bombard (6)
$ 12.00 SRP
Republique of France Marteau 'ACA-8' Class Bombard The Marteau ‘ACA-8’ Class Bombard is a vital component of l’Armee de Terre that no army should be without. Able to use indirect fire with its 360 degree long-range mortar, the Marteau will cause havoc to opposing forces, leaving them no refuge from its wrath.
Posted by ACD Distribution at 9:23 AM