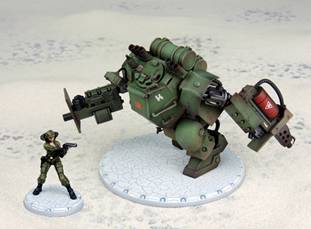 FFGDT034
Dust Tactics: Operation Zverograd
$ 44.95 SRP
SDI
Operation “Zverograd” is a Dust Tactics campaign expansion that delivers new scenarios, rules, and background for the Sino-Soviet Union. Inside you’ll discover rules for airborne units, a type of unit unseen to this point. Additionally, Operation “Zverograd” includes the first SSU hero, top-agent Koshka Rudinova and her walker “Grand’ma.” This hero is also the first in Dust Tactics to pilot a walker on the battlefield. Prepare to defend the doomed city of Zverograd in this campaign expansion. 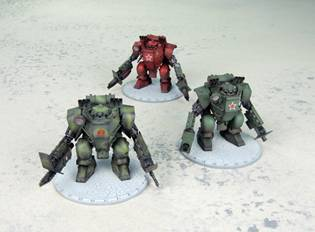 FFGDT035
Dust Tactics: KV47 Walker
$ 25.95 SRP
SDI
KV47 is a versatile new walker for Dust Tactics! While the SSU once lagged in walker technology, they have since developed the KV47, a walker platform capable of trading blows with any opposing armor. This impressive machine can be fielded in three different variants: the Nadya, Natasha, or Natalya. Whether you want to field the Nadya with its Sulfur Throwers, the Natasha and its 45mm Howitzers, or the Natalya featuring twin Circular Saws, there is a KV47 for any situation. Take command of this devastating SSU walker! Includes one highly detailed plastic miniature and components for all of its variants.

FFGDT036
Dust Tactics: SSU Command Squad
$ 19.95 SRP
SDI
The SSU Command Squad is an expansion for Dust Tactics. With this squad, you’ll gain a new level of control over your forces, as this unit is indispensable in overseeing their comrades. Use their skills to reactivate units that you’ve already used, bring previously destroyed vehicles back to the battlefield, or bring in squads to reinforce your army. With their powerful leadership abilities, the SSU Command Squad is invaluable to any SSU commander. Contains five highly detailed miniatures to add to your Dust Tactics collection. 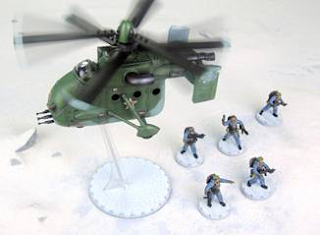 FFGDT038
Dust Tactics: SSU NKVD Close Combat Squad
$ 19.95 SRP
SDI
The NKVD Close Combat Squad provides versatile new soldiers for your Dust Tactics army. After fighting in many intense close-quarter situations, the soldiers of the SSU have become experts at this type of combat. Well-known for their ability to craft makeshift weapons like Molotov Cocktails, the SSU Close Combat Squads form a large part of the SSU forces. These grizzled squads carry Shotguns and a Flamethrower for maximum damage at close range, and to increase their effectiveness, they have learned how to scout out prime locations on the battlefield. Comes with five detailed miniatures to add to your Dust Tactics collection. 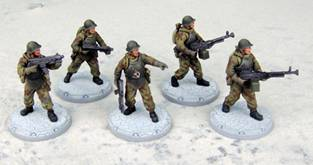 FFGDT039
Dust Tactics: SSU NKVD Battle Squad
$ 19.95 SRP
SDI
The NKVD Battle Squad brings tough new soldiers to your Dust Tactics army. Trained in the art of rapid assaults, the SSU Battle Squad frequently forms the front line of SSU armies. This squad is equipped with a pair of DPM machine guns that allow them to pummel the enemy from afar. SSU soldiers have fought on every type of terrain from the American Everglades to the frozen Russian tundra. With so much experience battling on hostile terrain, the forces of the SSU are among the most reliable in the world. Includes five highly detailed miniatures to add to your Dust Tactics collection.
Posted by ACD Distribution at 9:18 AM