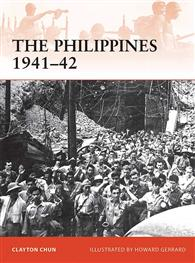 OSPCAM243
The Philippines 1941-42
$ 19.95 SRP
In the immediate aftermath of Pearl Harbor, the Japanese launched an attack on the Philippines to eliminate the United States’ other major Pacific naval base. Catching the US forces completely by surprise, the Japanese bombed the major airfields and quickly gained air supremacy. They followed with a full-scale invasion that quickly rolled up US–Filipino opposition and captured Manila. Meanwhile US forces, under the leadership of the Douglas MacArthur, created a series of defensive lines to try and stop the Japanese advance. Despite their efforts, they were continually pushed back until they held nothing more than the small island of Corregidor. With doom hanging over the US–Filipino forces, Douglas MacArthur was ordered to fly to safety in Australia, vowing to return. Nearly five months after the invasion began, the US–Filipino forces surrendered, and were led off on the ‘Bataan Death March’. This book covers the full campaign from the planning through to the execution, looking at the various battles and strategies that were employed by both sides in the battle for the Philippines. 96 pages. Softcover 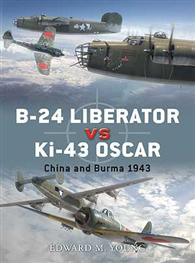 OSPDUE041
B-24 Liberator vs Ki-43 Oscar
$ 17.95 SRP
In reviewing reports of air combat from Spain, China and the early stages of the war in Europe, the US Army Air Corps called for heavier armor and armament for its bomber fleet, including the addition of a tail turret. While Japan tried to counter with their own heavy fighters, their inability to produce them in any number meant that they were forced to face the bomber threat with the nimble, but under–armored Ki-43 “Oscar”. While severely outgunned, the Japanese learned to use their greater maneuverability to exploit the small weakness in bomber defenses. This book tells the story of the clash in the skies over the Pacific, as the Japanese fought desperately against the coming tide of the American bomber offensive. 80 pages. Softcover 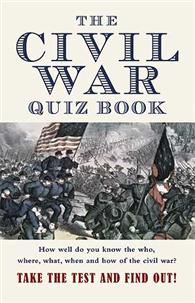 OSPGEN6189
Civil War Quiz Book SC
$ 9.95 SRP
How well do you know the who, where, what, when and how of the Civil War? Can you name the captain of the USS Monitor during the battle of Hampton Roads or match-up famous generals with their horses? Test your knowledge in this unique guide to the famous, infamous and quirky facts of the American Civil War. Complete with over 1,000 questions ranging from easy to nearly impossible and including true or false, multiple choice, short answer and match-ups, this is a fun-filled gift book that will both delight and frustrate any Civil War fan. 216 pages, softcover 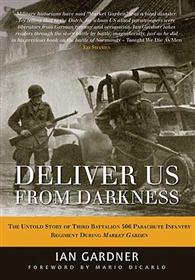 OSPGEN7179
Deliver Us From Darkness HC
$ 27.95 SRP
This follow-up to Tonight We Die As Men continues the story of the 506 Parachute Infantry Regiment of the 101st Airborne Division as they dropped into Holland as part of Operation Market Garden. The following 72-day campaign saw the 506PIR constantly on the move, defending various transport hubs around Eindhoven, desperately trying to keep open ‘Hell’s Highway’. From there, the airborne troopers moved north to near Arnhem where they took a new position around Betuwe. For two months, the Americans battled against German tanks, constant artillery barrages and driving rain and they grimly held their ground, until the Germans finally abandoned the effort. Written with the help and input from numerous veterans, this book tells the complete story of many of America’s best soldiers as they fought and died in Holland. 344 pages, Hardcover 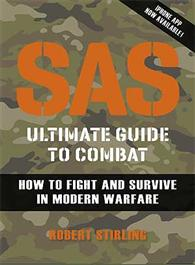 OSPGEN7636
SAS Ultimate Guide to Combat
$ 25.95 SRP
I’ve written this book to help you – the soldier – kill the enemy when you get the chance and, most importantly, come back home in one piece. To achieve this aim I’ve covered combat training from boot camp up to the level required of a Special Forces soldier. And then gone on to add a few tricks of my own. I’ve done a bit of soldiering (Northern Ireland, SAS deployments, Bush Wars in Africa, life as a merc) and been in my fair share of fire-fights. I’ve only been wounded twice and learnt from both occasions. I’m going to use my experience to teach you to play the game. I’m not going to teach you how to survive in snowy mountains for a month with only one tea-bag or how to kill a room fill of people with only a toothpick. There are plenty of books that do that already. This book will teach you how to fight and survive war in the 21st century from the tools of the trade, to avoiding getting shot or blown-up, from surviving an interrogation to defending a position. This is a book not for the faint hearted. But then neither is war. 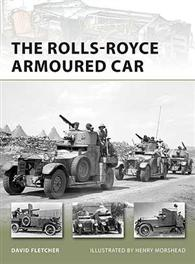 OSPNVG189
The Rolls-Royce Armoured Car
$ 17.95 SRP
The first Rolls-Royce armoured car was a privately owned vehicle fitted with a machine-gun and a limited amount of armour plate, used by the Royal Naval Air Service in Flanders in 1914. By 1915, nearly 100 had been built and turned over to the Army. From then on, as Sir Albert Stern said ‘They searched the world for war’, operating as far apart as the northwest frontier of India, the Middle East and southern Africa. The cars were fast, quiet and reliable but above all powerful. ‘A Rolls in the desert is above rubies,’ said Lawrence of Arabia. After World War I, the War Office continued to produce the Rolls-Royce while tinkering with the design. These further cars served all across the Empire, including in Ireland and even later Shanghai, returning for a final brief appearance in the early stages of World War II. This book tells the complete story of the Rolls-Royce Armoured Car, following its design and development as it fought from theatre to theatre during World War I and the turbulent inter-war years. 48 pages. Softcover 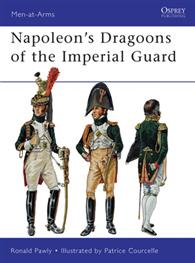 OSPMAA480
Napoleons Dragoons o/t Imperial Guard
$ 17.95 SRP
Dressed in distinctive green uniforms and classically inspired copper helmets, the Dragoons of the Imperial Guard were raised in 1806 by the same criteria as other Guard units – by selection of picked, literate veterans from Line regiments who had six to ten years of service, and citations for bravery in at least two campaigns. The following year they were named Dragons de l’Impératrice in a unique compliment to the Empress Josephine. As a ceremonial regiment it enjoyed many privileges, but it also saw combat on a number of occasions, including the battles of Essling and Wagram (1809), the Russian campaign (1812, when it suffered severe losses), at Bautzen, Wachau and Leipzig (1813), in the 1814 Campaign of France, and at Ligny and Waterloo (1815). 48 pages. Softcover 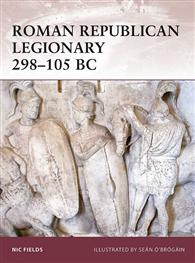 OSPWAR162
Roman Republican Legionary 298-105 BC
$ 18.95 SRP
Soon after the Caudine Forks fiasco in 321 BC, the tactical formation adopted by the Roman Army underwent a radical change. Introduced as part of the Servian reforms, the legion had originally operated as a Greek-style phalanx. Now, however, the Romans adopted the manipular system, whereby the legion was split into distinct battle lines, each consisting of tactical subunits, the maniples. Even though still a citizen militia, recruited from property owners supplying their own war gear, it was the manipular legion that faced Pyrrhus and his elephants, the Gauls and their long swords, Hannibal and his tactical genius and the Macedonians and their pikes to name but a few of its formidable opponents. This book looks at the recruitment, training, weapons, equipment and experiences of the legionary at the epoch of the middle Republic, which opens with the last great war with the Samnites (Third Samnite War, 298–290 BC) and closes with the Republic at the height of its imperial glory after the victory in North Africa (Iugurthine War 112–105 BC). 64 pages. Softcover 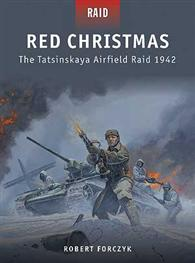 OSPRAID030
Red Christmas-Tatsinskaya Airfield 1942
$ 18.95 SRP
By December 1942, the Soviets had surrounded the German 6th Army in Stalingrad, cutting off all lines of supply except through the air. Seeking to sever this last German lifeline, Soviet Command decided to launch a raid with the entire 24th Tank Corps to seize the airfield at Tatsinskaya, the primary operating base for the German airlift efforts. On 17 December, the 24th Tank Corps advanced toward Tatsinskaya, seizing the airfield on Christmas Eve. The Soviet tankers succeeded in destroying many Luftwaffe aircraft on the ground, but afterwards found themselves isolated and out of fuel behind the German lines. General field marshal Erich von Manstein rapidly organized a counterattack with elements of two panzer divisions, crushing most of the raiding force between 26 and 28 December. Just before the raiding force was annihilated, it received permission to abandon its heavy equipment and escape back to Soviet lines on foot. Thus, the raiders accomplished their mission of severely disrupting the airlift to Stalingrad, but at the cost of an entire tank corps. 80 pages. Softcover 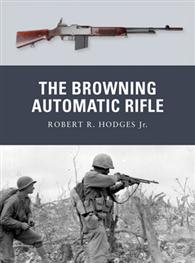 OSPWPN015
The Browning Automatic Rifle
$ 17.95 SRP
For nearly fifty years the hard-hitting, mobile Browning Automatic Rifle, or BAR, served in US infantry units as a light squad automatic “base of fire” weapon, providing quick bursts of concentrated fire. Designed in World War One, it didn’t reach the front until September 1918. In the interwar years US forces used the BAR across the world, from China to Nicaragua. It also became a favorite of notorious gangsters like Clyde Barrow and Bonnie Parker, who prized its ability to punch through police armored cars. At the outset of World War II the US armed forces decided to adapt the BAR for a light machine gun role. The BAR was not without its flaws; it was heavy and difficult to dismantle and reassemble, and it didn’t cope well with sustained fire. Nevertheless, the BAR saw action in every major theater of World War II and went on to be used in Korea and in the opening stages of the Vietnam War. Featuring arresting first-hand accounts, specially drawn full-color artwork and close-up photographs, many in color, this lively study offers a vivid portrait of this powerful, long-lived and innovative weapon that saw service with US and other forces across the world for much of the 20th century. 80 pages. Softcover
Posted by ACD Distribution at 9:40 AM