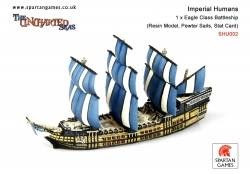 SGCSHU002
US: Imp. Humans Eagle Class Battleship
$ 31.00 SRP
With its massive sails the Eagle Class Battleship is one of the most imposing, and elegant, sailing ships in the Uncharted Seas. With its massive broadsides this ship can lay down devastating dire, able to cripple most vessels easily in Range Bands 1 to 2. Its fore guns are capable and a 4/3/1 cannon rating at the aft should make smaller ships think about sneaking behind this impressive vessel. A well built hull gives the Eagle a DR rating of 6 and a CR rating of 11 and with 8 HPs this Battleship can hold its own for long periods of sustained combat.

The Eagle is the mainstay of an Imperial Human Fleet and just as the Imperial Overlord is proud of this vessel, so the ship builders at Spartan Games are proud of its new digital construction. Superior levels of detail make this vessel stand out, and when fully assembled with its sails this vessel epitomizes elegance on the waves. 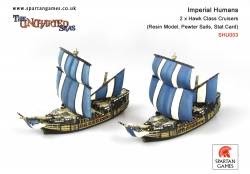 SGCSHU003
US: Imp. Humans Hawk Class Cruiser (2)
$ 26.00 SRP
They say that imitation is the greatest form of flattery, and when the Hawk Class Cruiser was designed the shipwrights clearly had the Eagle Class Battleship in mind. This vessel can lay down cannon fire to ALL arcs and with a movement rating of 9" the Hawk is maneuverable and deadly. A Squadron of 3 can punch out 12AD to port and starboard in Range Band 1. 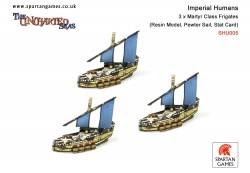 SGCSHU005
US: Imp. Humans Martyr Class Frigate (3)
$ 14.00 SRP
Martyr ships are manned by zealot crews taken from the Imperial Human naval prisons. Given the choice to rot in prison and eventually feel the pinch of the hangman’s noose, or sail to greater glory onboard a Martyr ship, many choose to take the path of glory and end their lives in a shower of pieces!
Now for the good news: any crewman that survives the explosion of a Martyr ship receives a full pardon and is welcomed into the ranks of the navy with awe. Martyr ships can operate in squadrons of their own, or be placed in amongst other Frigates, sailing forwards to regain their honor. 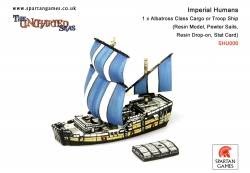 SGCSHU006
US: Imp. Humans Albatross Transport (1)
$ 24.00 SRP
The marines of the Imperial Human Navy are fierce warriors capable of defending any ship. The role of the Albatross is to move them from one conflict to another, but at sea the Albatross can be used, with its Marines, to intimidate and capture enemy vessels by Boarding them. 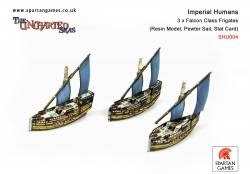 SGCSHU004
US: Imp. Humans Falcon Class Frigates (3)
$ 14.00 SRP
Sleek, fast and functional. These three simple words sum up the Falcon. A workhorse of any Imperial Human Fleet, the Falcon can hold its own in Range Band 1, especially when four vessels combine their fire for 10AD. 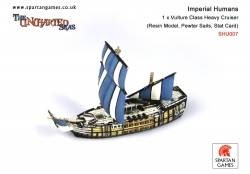 SGCSHU007
US: Imp. Humans Vulture Heavy Cruiser
$ 14.50 SRP
So what happens when you take a Hawk and make it even more scary? Answer: it turns into a Vulture Class Heavy Cruiser. At 75 points this is not a cheap model to have in a fleet, but when you consider that 3 models can, in Range Band 1, lay down 17AD to port and starboard, you can quickly see why this ship is called a Vulture. 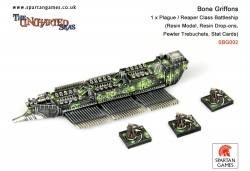 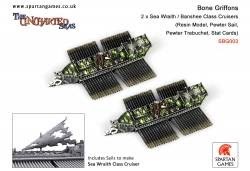 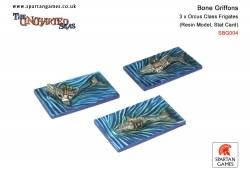 SGCSBG004
US: Bone Griffons Orcs Class Frigate
$ 12.00 SRP
The undead have used their magic to raise the corpses of long dead whales (the Orcus) and various serpents from the sea bed, to instill in them the same elements of the Withering that keeps the Bone Griffons from dying normally. These carrion creatures drag their war galleys through the sea and are a terrible sight to behold. 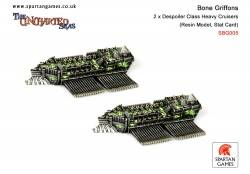 SGCSBG005
US: Bone Griffons Despoiler Heavy Cruisers
$ 17.00 SRP
What more can you ask for in a Heavy Cruiser? The Despoiler is a bruiser, and will indeed leave your enemy’s ships battered and bruised. The Bone Griffons use a combination of whale bone, coral and timber from shipwrecks to keep their galleys sea worthy; the Despoiler Class Heavy Cruiser ensures their opponents galleys are anything but. 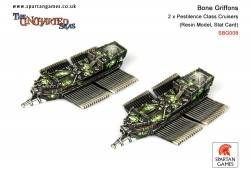 SGCSBG008
US: Bone Griffons Pestilence Cruiser (2)
$ 17.00 SRP
The Pestilence Class Cruiser has all the trappings of a mean and horrible Cruiser that also comes with the ability to kill crew by hurling a mass of putrid, rotting flesh at them. This is a grim and frightening reality for those that dare creep close enough to this gruesome ship. 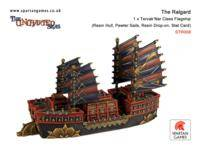 SGCSTR008
US: Ralgard: Tervak'Nar Class Flagship
$ 32.00 SRP
The massive front cannons of this Flagship has been known to literally slam ships backwards with its force, and those captains who have so far survived an engagement with a Tervak’Nar swear on all that is sacred that these ships actually feed on the life energy of the crew of the ships that it destroys.
Posted by ACD Distribution at 9:36 AM