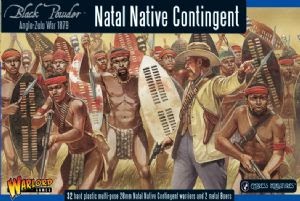 WRLZ4
BP: Natal Native Contingent
$ 34.00 SRP
The NNC were auxiliary infantry recruited by the British from friendly natives who had settled in Natal and were mortal enemies of the threatening Zulus. They were organized along regular British lines, in companies, battalions and regiments.

A company of these troops would have 90 soldiers armed with traditional spear and shield with one in ten also toting a rifle of sometimes dubious provenance. They were led by European officers and NCOs who would use their Martini-Henry rifles and bayonets leaving the rank and file to tough it out in their traditional way.

The quality of the units varied – some were ineffective, many deserted but others fought well and were invaluable in scouting and in mopping up operations where they excelled in the pursuit.
They distinguished themselves from the Zulus by the simple expedient of a red rag tied around their heads or arms.

Posted by ACD Distribution at 4:14 PM