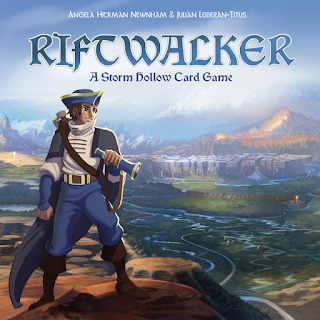 Explore the rifts of Storm Hollow, build an array of amazing powers, and trigger burst of magical energy to score big in this strategy card game. In Riftwalker, players use a central grid of elements composed of earth, wind, fire, water, storm, and life to play rift cards from their hand or shift rifts they already have in play.

Shifting a Rift is a Riftwalker's magical ability to change the nature of a place by calling on and altering the elements. Shifting turns a card sideways and increases its point value. Every time a rift card is played or shifted, it activates a special power that alters a player's cards or the central grid in a useful way. As the game progresses, players will build up a unique set of abilities.

Earth rifts empower shifted rifts while fire burns them down for points. Water rifts spread more rifts across the land and life rifts grow them to great value. Storm rifts control the element grid and wind rifts play all kinds of tricks. Eventually, players must create lines of elements on the grid to score their rifts. In the end, the player with the greatest rifts and the most points wins the game! 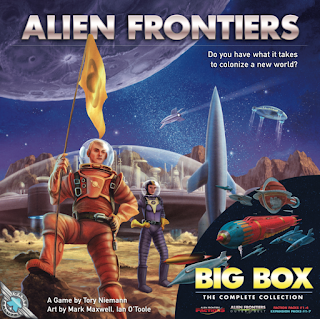 Alien Frontiers was funded on Kickstarter back in 2010. Since then, this gripping game of colonizing an alien world has grown to include two major expansions: Factions and Outer Belt, along with a galaxy of other fun additions. To celebrate, we've collected them all into the new Alien Frontiers Big Box.