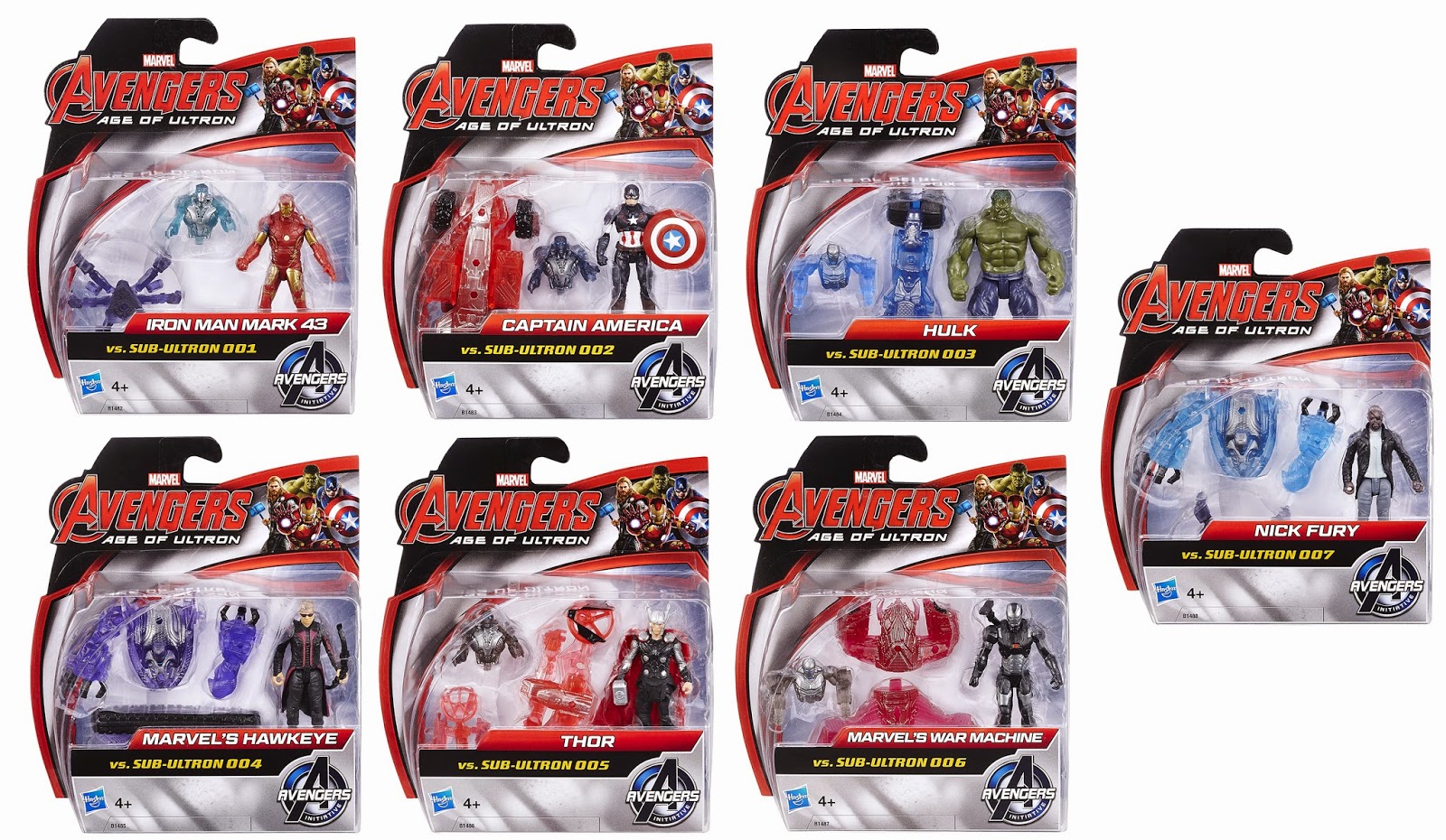 The villainy of Ultron has many parts, and it’s up to you to assemble them!

This Avengers figure 2-pack has a Sub-Ultron 003 drone figure, and by himself he’s a force for disaster. He’s a wheeled nightmare and he’s ready to take on your villain-smashing Hulk figure in a battle for the fate of the universe!

Collect the other drone figures (other figure packs sold separately) to build a terrifying Ultimate Drone figure. Will the Avengers be able to stop him? The battle is about to be joined!

Avengers All-Stars in 2015 have five points of articulation, with movie styling and deco and all at a great price point! Collect them all to defend the universe!

This 2.5” scaled universe also features Deluxe figures! Each deluxe 2-pack comes with a Hero figure and either an oversized figure or a figure vehicle. The figure and deco are movie-based. 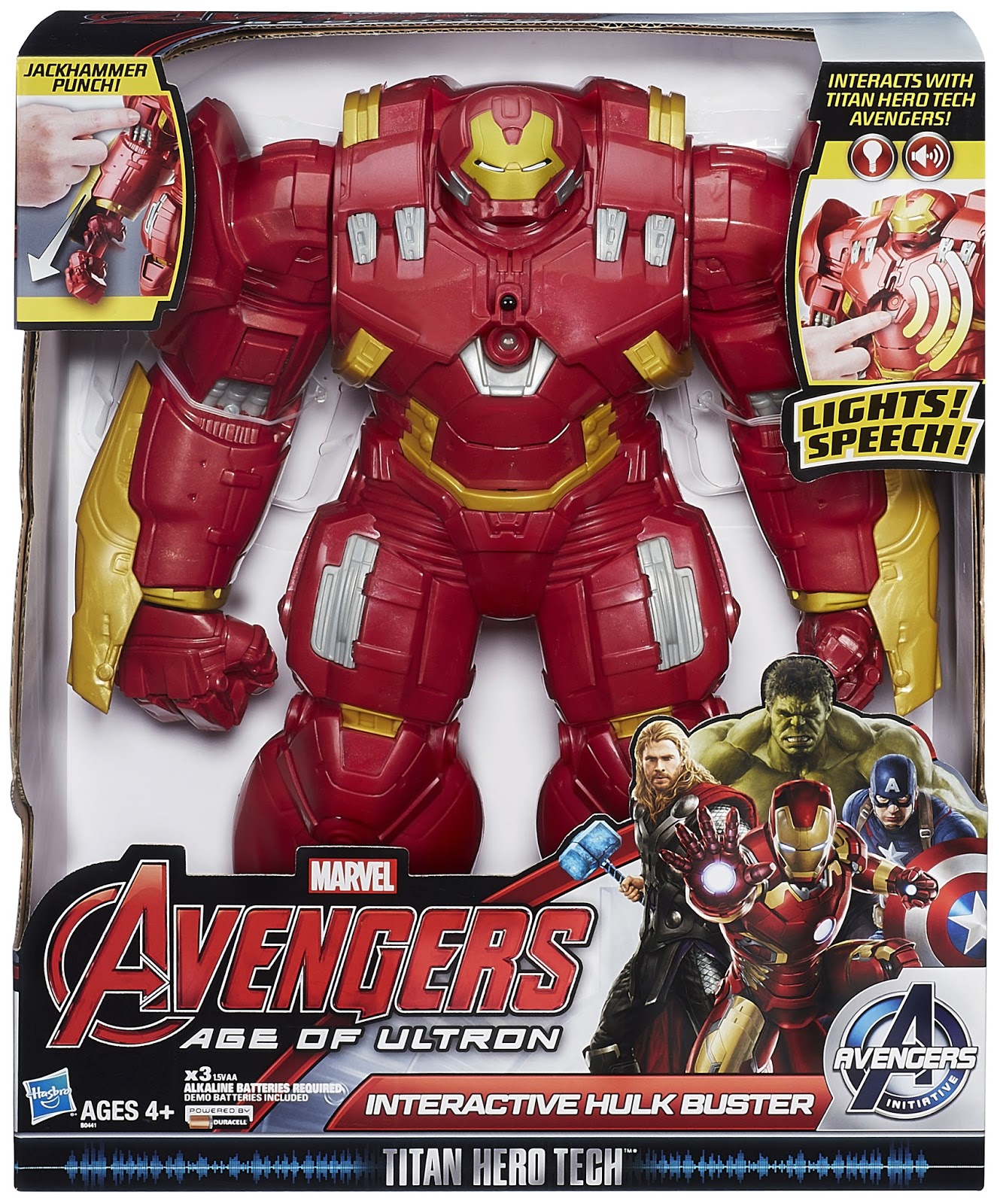 The Avengers face their worst enemy yet, but they’ve got a secret weapon: Titan Hero Tech! This Interactive Hulk Buster figure has the massive strength of the gamma-green superhero, but he combines it with a jackhammer punch and the high-tech super-armor of Iron Man!

He says phrases like “Oh, this is power!” and when he’s near other Titan Hero Tech figures (sold separately), he recognizes each one and reacts to them, saying “Cap, I’m your one-machine army” to Captain America and “Let’s armor up!” to Iron Man Mark 43. His lights and battle sounds will make the battle against Ultron even more epic!  Team up your Interactive Hulk Buster figure with his fellow Avengers and start the battle for the fate of the world! 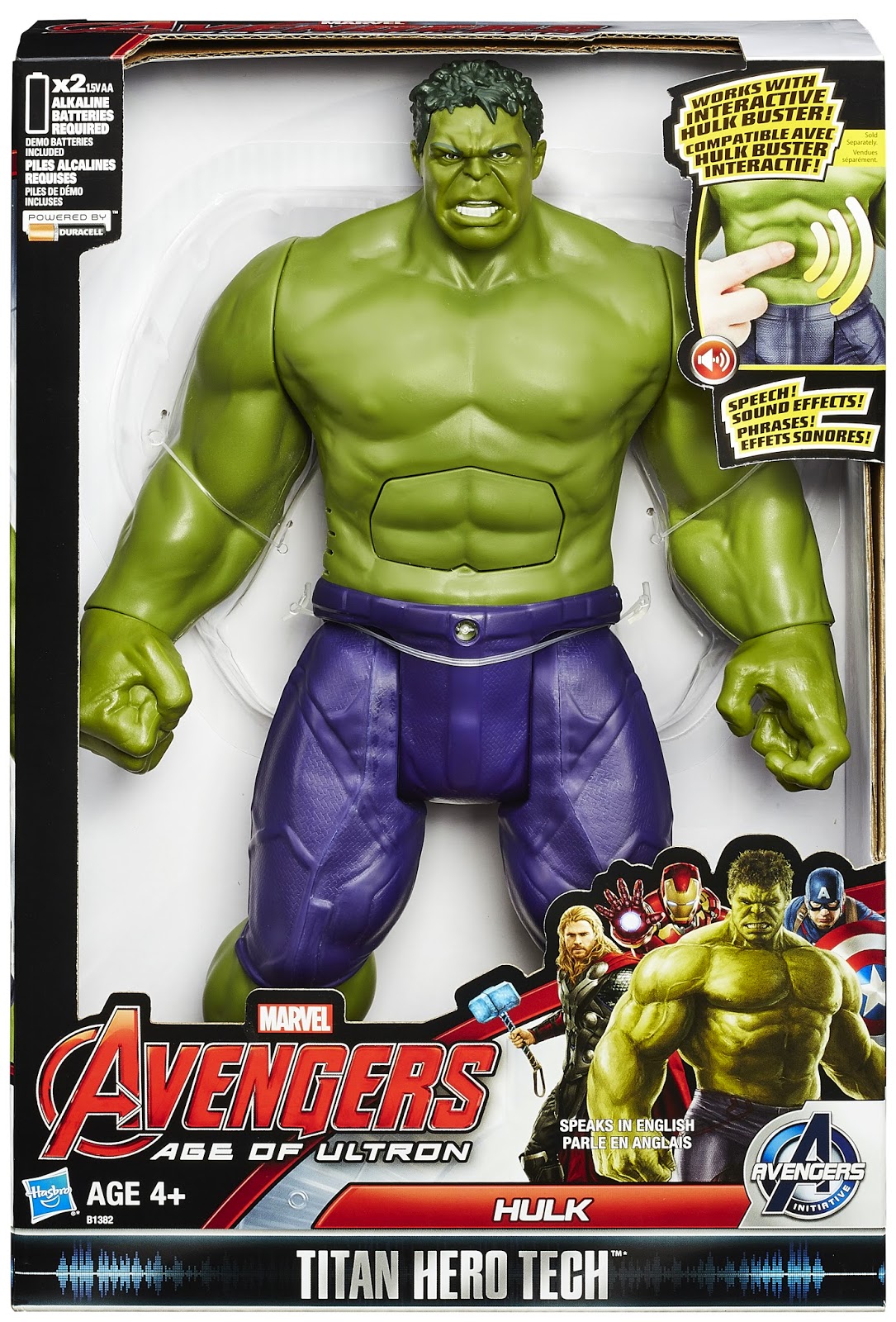 The Avengers face their worst enemy yet, but they’ve got a secret weapon: Titan Hero Tech! This Hulk figure has the massive strength of the gamma-green superhero, but he combines it with high-tech light effects and sounds!

He says phrases like “Hulk smash!” and he recognizes and reacts to other Titan Hero Tech figures (sold separately). He’ll say “Hulk smash puny robot!” to Iron Man! Team up your Hulk figure with his fellow Avengers against Ultron, and start the battle for the fate of the world! 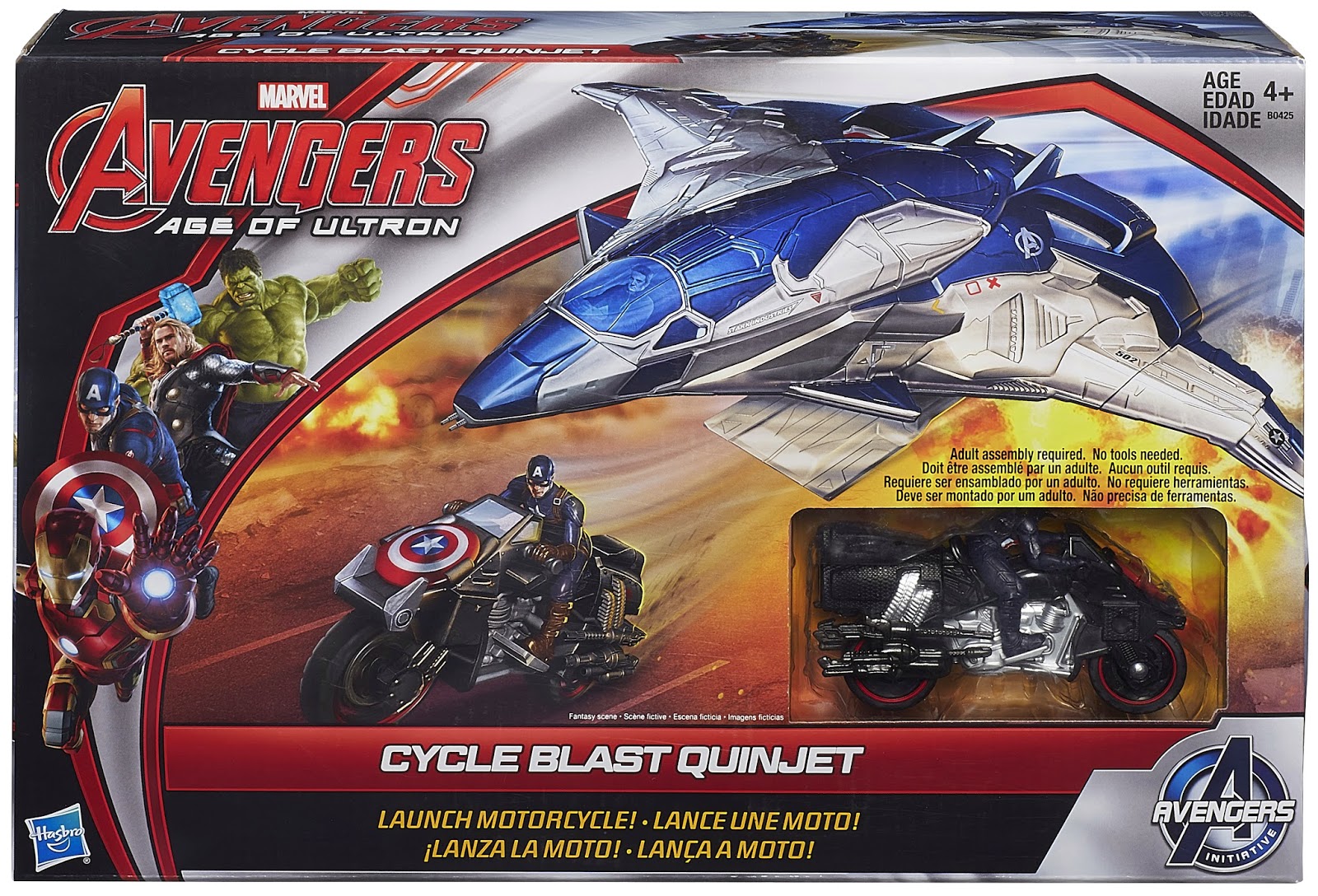 Launch your own air-to-ground attack with this incredible Cycle Blast Quinjet vehicle! The sleek jet fits up to 4 figures (other figures sold separately). It’s a fast-driving jet with a secret weapon -  a compartment that launches a motorcycle! With your Captain America figure speeding away on his powerful cycle, the jet can climb back to higher altitude for recon and air attacks!

Bad guys will be running for cover when you deploy your awesome Cycle Blast Quinject vehicle. 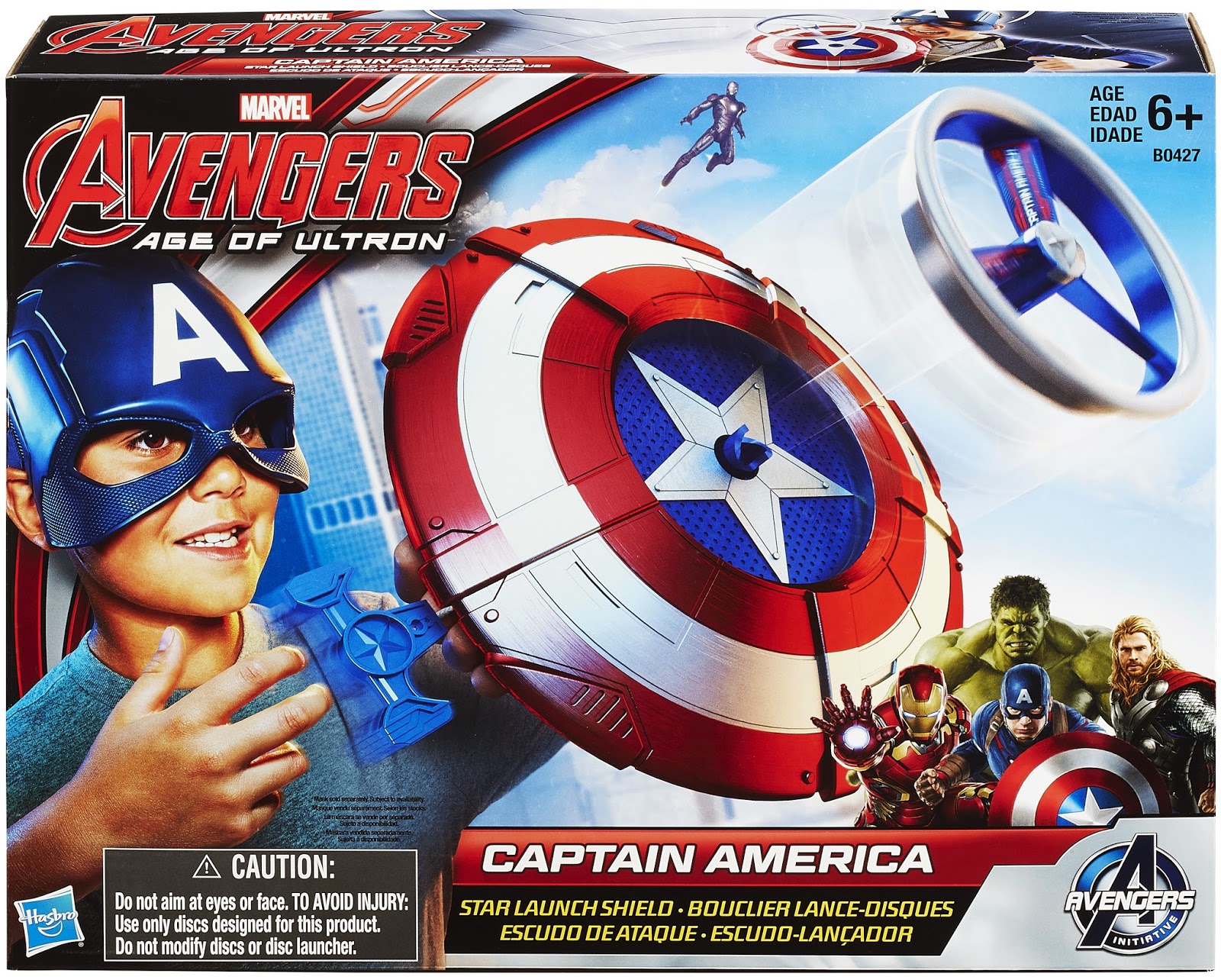 Super-size your crime-fighting skills with a flying shield that looks just like Captain America’s!

When you launch this shield at the bad guys, it flies through the air and takes down both the evildoers and their evil plans! With this high-powered shield on your arm, there’s no telling where your Avengers adventures will take you! 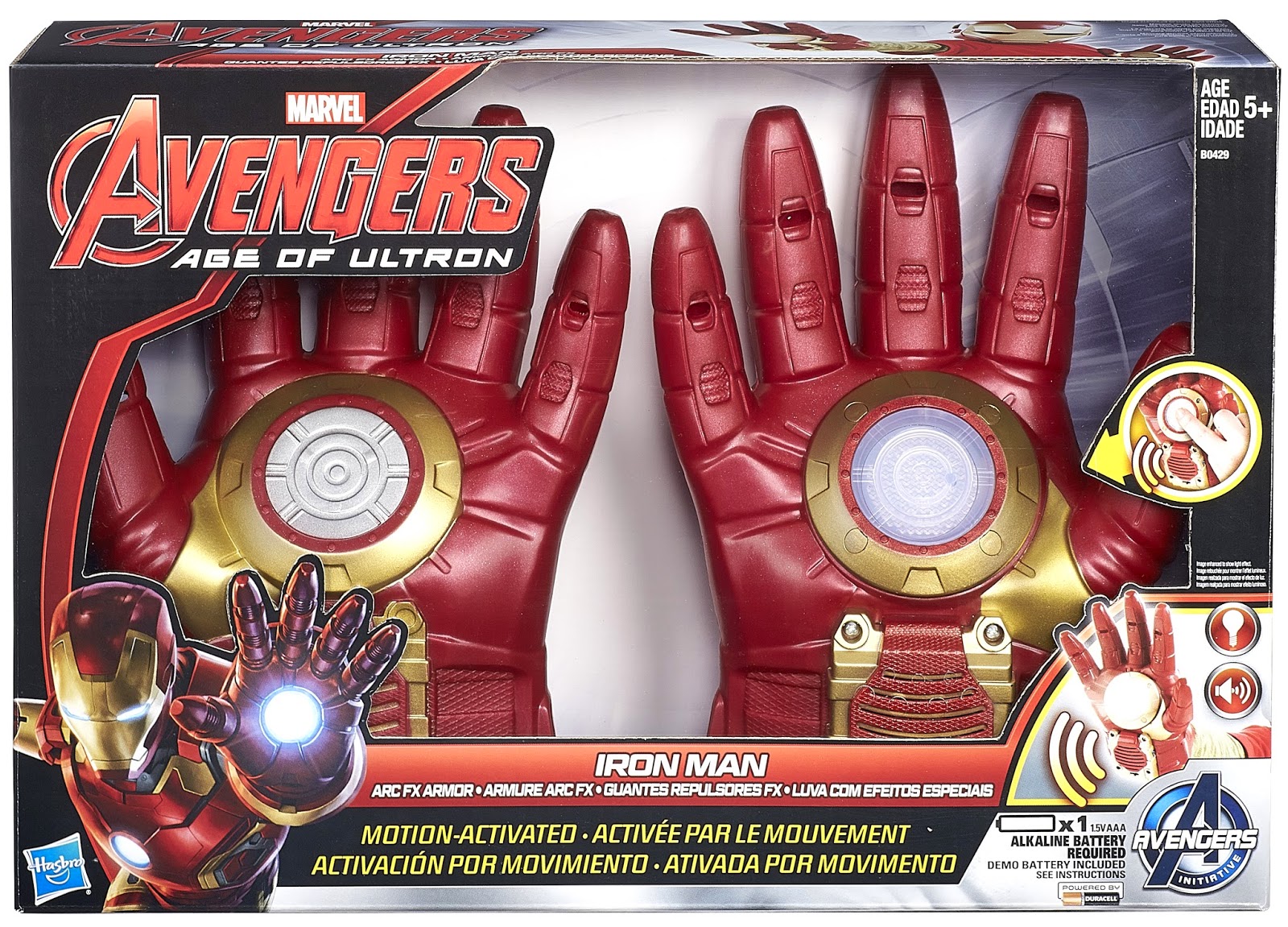 Be like Iron Man with these powered up Arc FX gloves! 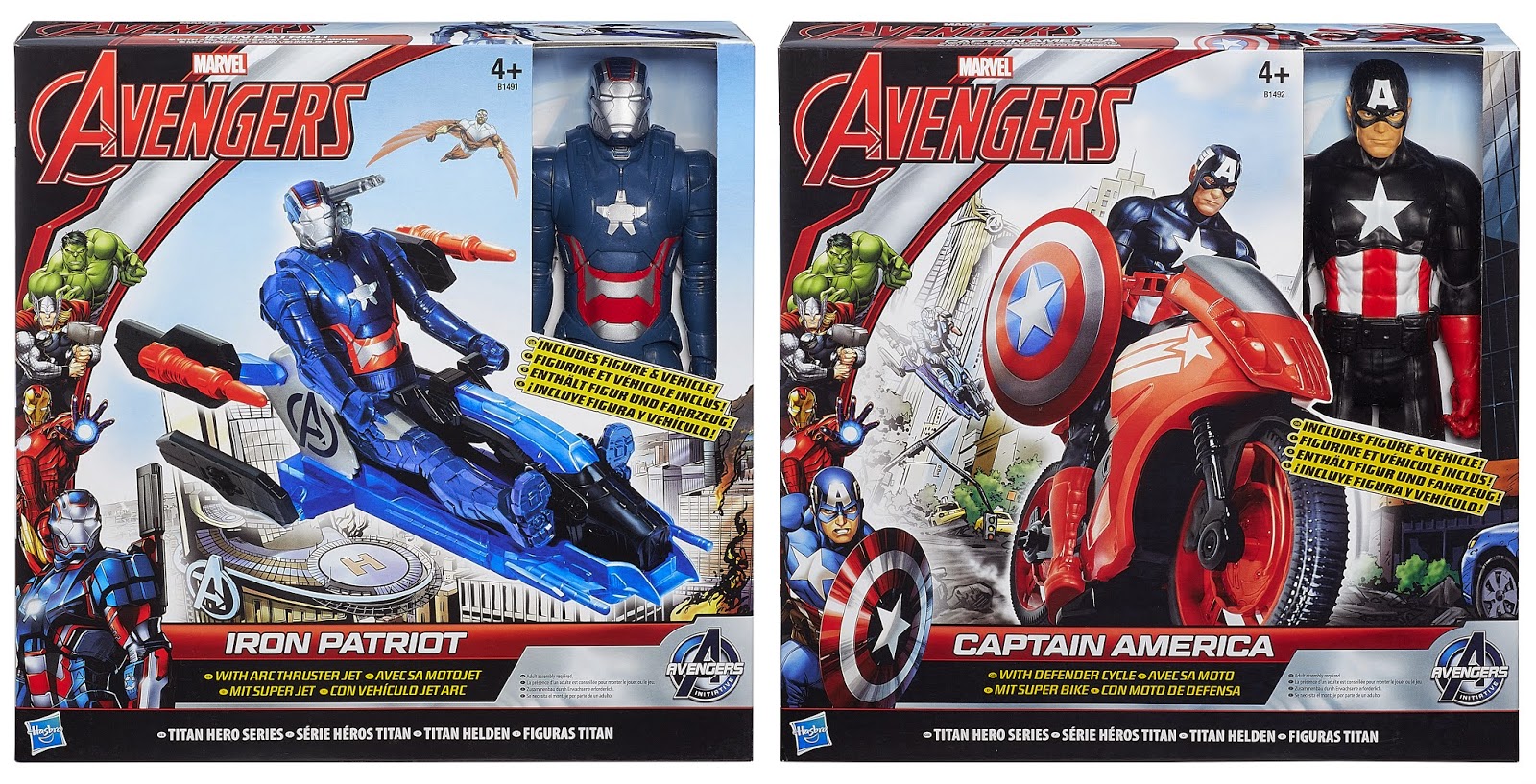 These Titan Hero vehicles are going to help the Iron Patriot and Captain America when they need some turbo-powered help against their  toughest enemies! The Titan Hero Series Iron Patriot figure comes with a speedy Arc Thruster Jet vehicle for high-speed chases across the sky, blasting the bad guys with his mighty cannons! With this power-thrusting plane, your Iron Patriot figure will prevail over his enemies every time! And the Titan Hero Series Captain America is sure to speed away on his Defender Cycle, throwing his classic shield ready to defend the world! 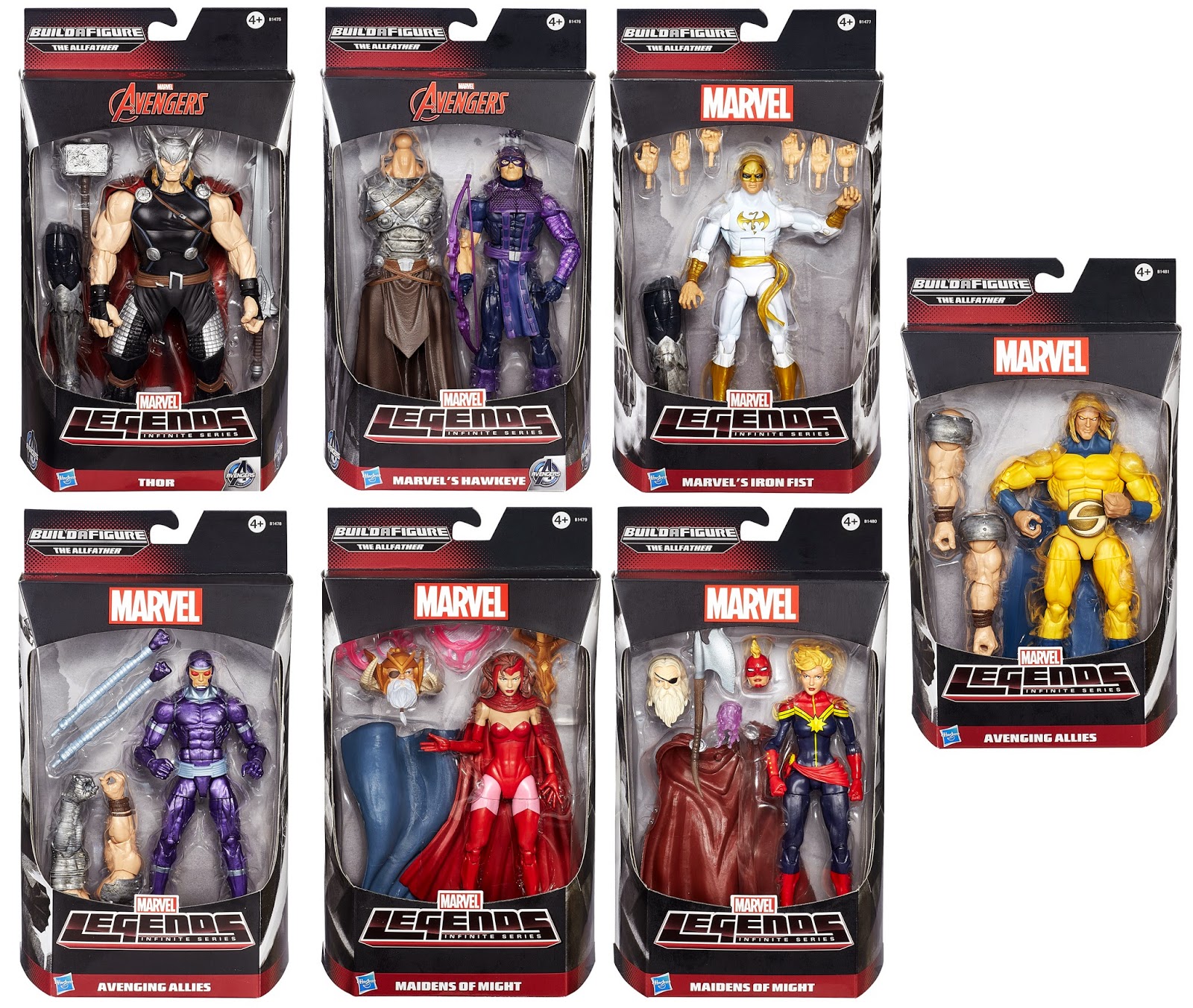 The mighty hero in search of his identity is on a mission to save Earth from evil! This awesome Avenging Allies figures will use their super-powers to launch attacks on the foe. Each set also comes with an arm part that you can use to build a The Allfather figure!

Collect the whole series (other figures sold separately) to complete him and send him into battle alongside your Sentry figure. The action is epic when you build your own The Allfather figure!

Imagine you’re joining the battle between good and evil as one of Earth’s Mightiest Heroes…or as one of the planet’s greatest villains. 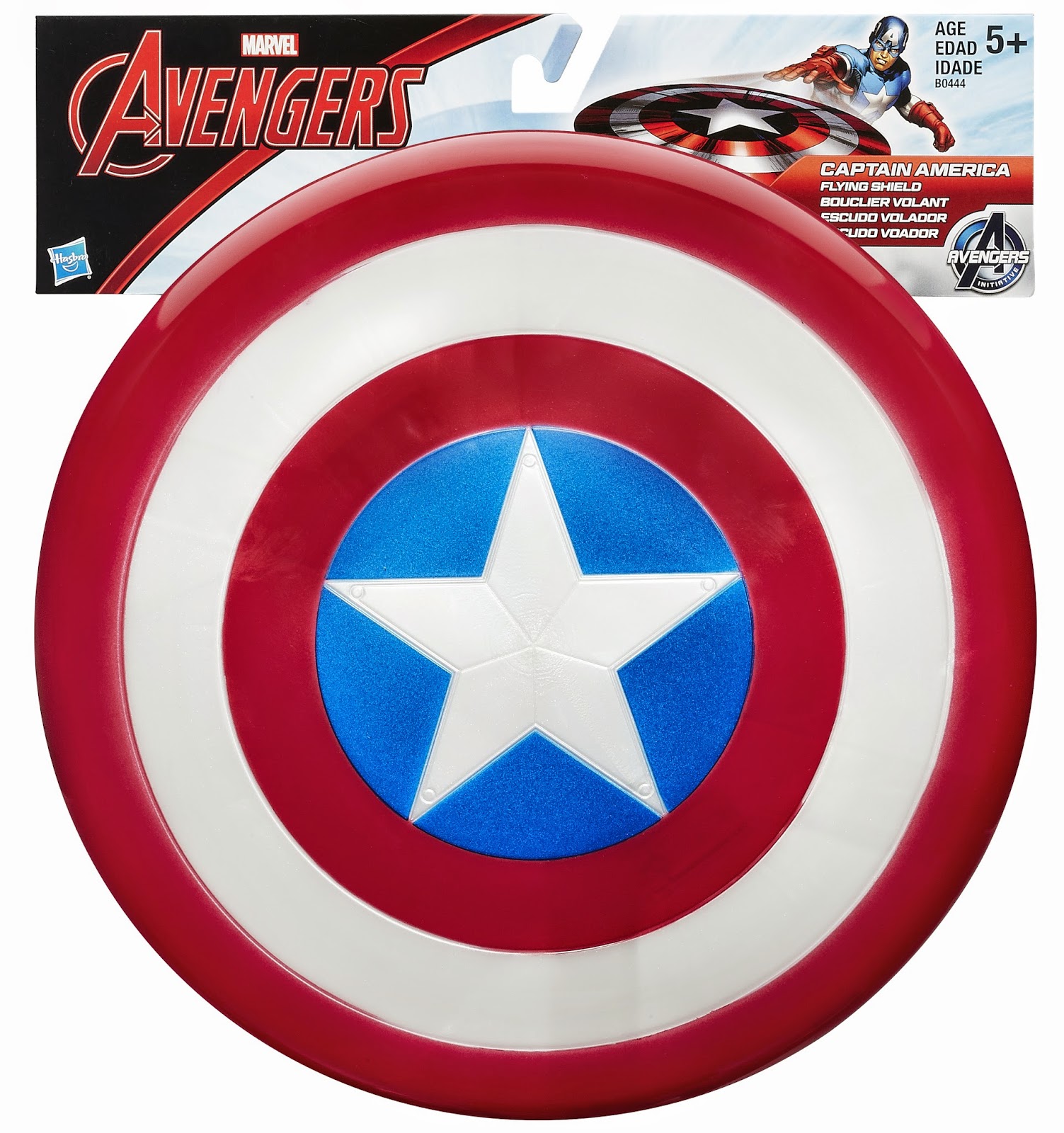 Super-size your crime-fighting skills with a flying shield that looks just like Captain America’s! When you launch this shield at the bad guys, it flies through the air and takes down both the evildoers and their evil plans! With this high-powered shield on your arm, there’s no telling where your Avengers adventures will take you!

Super-size your crime-fighting skills with a battle hammer that looks just like Thor’s! When you swing this hammer at the bad guys, they’ll fall along with their evil! With this high-powered hammer in your hand, there's no telling where your Avengers adventures will take you! 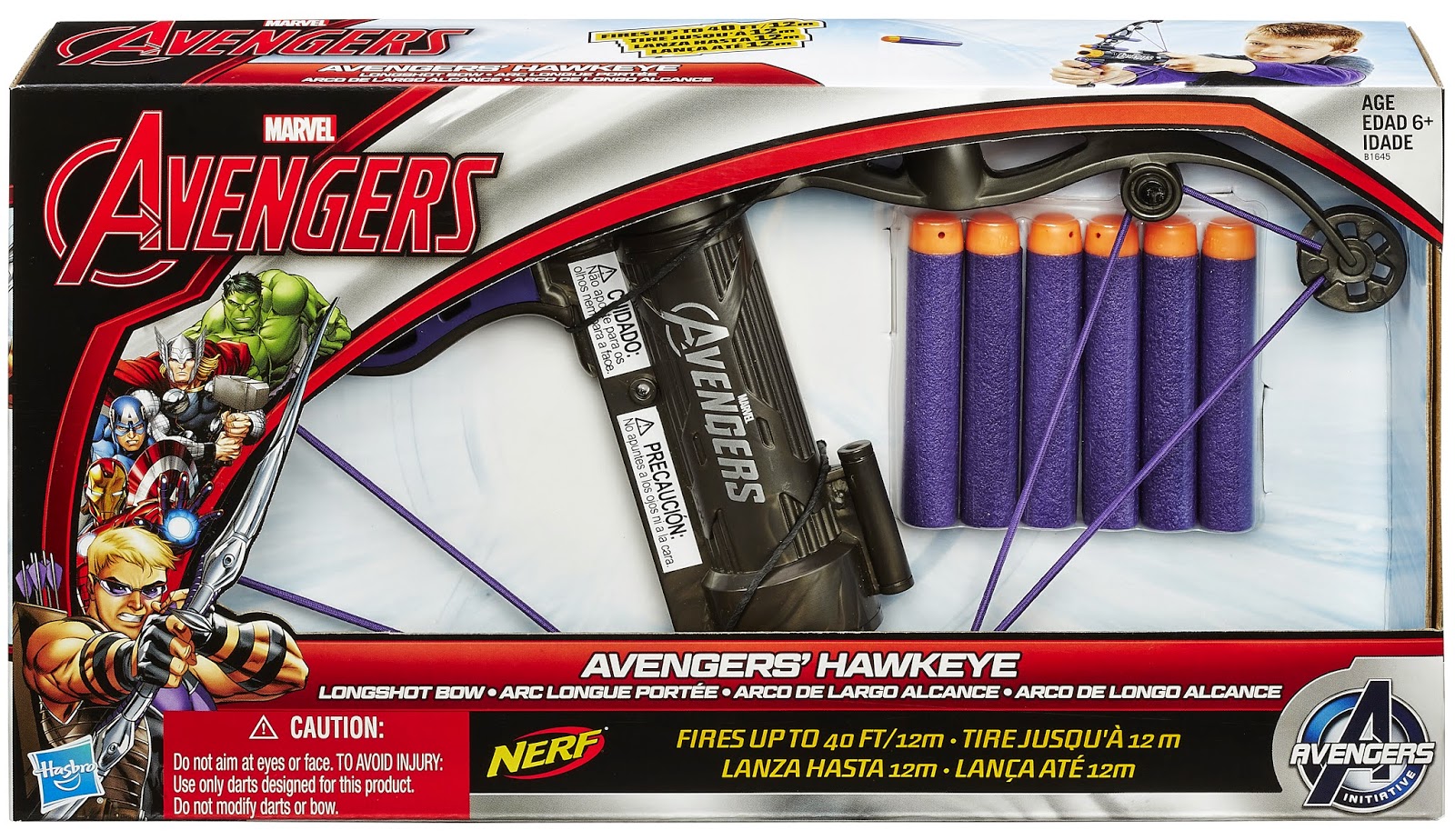 Imagine you’re taking down evil from a distance with the Hawkeye Longshot Bow! Styled after the animation, this bow fires NERF darts up to 40 feet away. Practice your form and make the perfect shot! 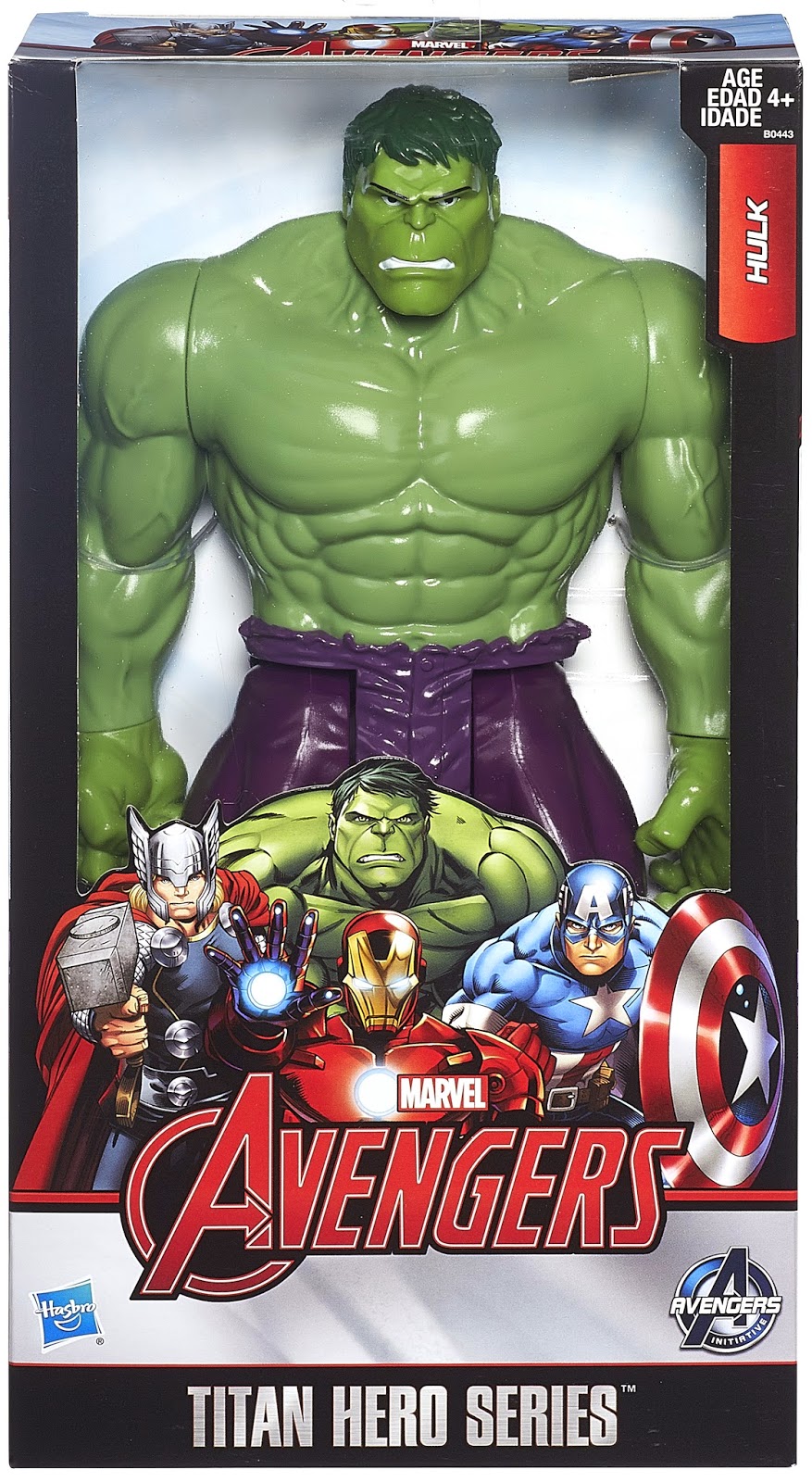 With an extra-wide 6.5 inch package, Hulk is bigger, meaner, and greener than his fellow Titan Hero figures. Hulk has five points of articulation and classic styling and deco.

Iron Man jets through the sky armed with incredible energy weapons and super strength, ready to blast the bad guys!

Super-size your crime-fighting adventures with the armored techno-hero Iron Man! This 12-inch Iron Man figure will use his super strength and technology to open up an attack from above on evil everywhere. With him on your side, there’s no telling where your Avengers adventures will take you!

Super-size your superhero adventures with the First Avenger!

This Titan Hero Captain America figure comes with an “indestructible” shield and he’s ready to open up a shield-smashing attack on the foes of justice everywhere. With him on your side, there’s no telling where your Avengers adventures will take you!

Thor crushes evil with superhuman strength and his indestructible hammer! Wielding the powers of Asgard, he unleashes a storm of fury upon any enemies that threaten the world he has sworn to protect.

Super-size your superhero adventures with the superhuman Avenger! This Titan Hero Series Thor figure wields his Asgardian hammer and he’s ready to open up a lightning-hammer attack on the foes of justice everywhere. With him on your side, there’s no telling where your Avengers adventures will take you!

These movie-themed playsets are the perfect backdrops for action play in the 2.5” scale Miniverse.

This assortment of two includes the Iron Man Mark 44 Battle Breakout and the Captain America Drone Defense playsets; each modeled after action packed movie scenes. The smaller scale playset delivers all the fun at a lower price point, while still delivering lots of action play!

Playsets come with 1-2 figures each.

With the heads, weapons, and other parts in this set, you can put an Iron Man head on a Captain America body and give him a Hulk arm! Then you can arm him with a Thor hammer or other weapons! Swap parts from other Super Hero Mashers figures (sold separately) to create even more heroic mashups. The options are many, so action up your Mash-Ups with the Ultimate Avengers Set!

Note: All assortments are random and SRP is priced for each individual packaged product.
Posted by ACD Distribution at 2:30 PM