New from Wizards of the Coast! Magic: The Gathering: Conspiracy Booster Display! 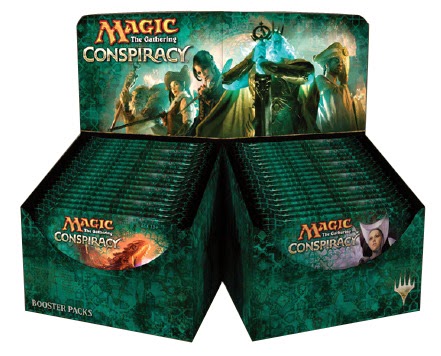 Magic: The Gathering: Conspiracy is a new standalone booster set where the intrigue begins long before the first spells are cast! The set is designed to be drafted and then played in Free-for-All multiplayer games.

Revolutionary new abilities impact every part of the experience, from drafting and deck-building to playing the game. New Magic cards with new mechanics, as well as returning favorites, will help draw players into your store for this unique multiplayer booster draft experience.

The Conspiracy format is best suited for drafts with approximately 8 players. After players draft and build their decks, they divide into two groups of 3-5 players that will play Free-for-All multiplayer games.


Magic: The Gathering: Conspiracy is a 210 black-bordered card set including 60 unique new cards!
Posted by ACD Distribution at 2:30 PM

Email ThisBlogThis!Share to TwitterShare to FacebookShare to Pinterest
Labels: booster, ccg, display, june, magic the gathering, wizards of the coast