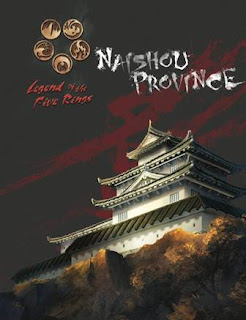 “May you live in the most interesting of times.”-Old Akodo curse

In a forgotten corner of the Empire of Rokugan lies the small Naishou province. Unremarkable in virtually every way for as long as anyone can remember, the provincial governor of Naishou died under mysterious circumstances some time ago, and since then, things in the province have gotten interesting. Intrigue and treachery have become the order of the day, and even the most honorable of samurai find themselves placed in impossible positions, both by the plots of enemies hidden in the shadows as well as by the machinations of their own allies.

Secrets of the Empire: Naishou Province provides both Game Masters and players with new tools to enjoy the world of Rokugan with a level of detail that has never been attempted before. One entire province of the Empire has been completely detailed, although room has been left for individual groups to fill in the blanks with their own ideas and creations.

In this book you will find:
Posted by ACD Distribution at 1:00 PM