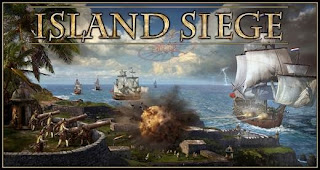 Build your forts using the choicest stone. Then have your colonists construct ships and buildings to improve your settlement. Send you capable fleet to destroy your opponent with an Island Siege!

Island Siege is a fast-playing game of fort-building and colonization in the Caribbean Sea. Players build shore side forts to defend their colonists from attack and to score points. Forts allow you to put colonists in play, which in turn can safely build ships and buildings which provide abilities and points. Attacking allows you to chip away at your opponent’s fort while gaining cubes which are used to build forts of your own. Your goal is to score 20 coins or get all of your colonists in play!

(cover art not finalized)
Posted by ACD Distribution at 6:01 PM