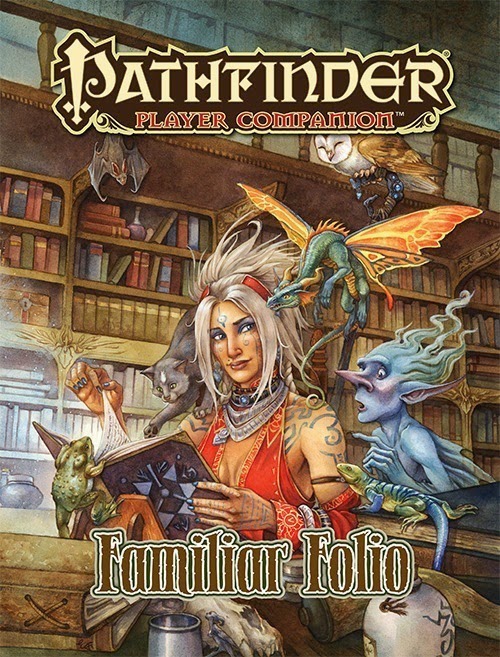 It’s time to make your familiar more fearsome! Whether you’re looking to give your familiar an archetype to make it a brutish battle companion, you’re hoping to gain a familiar option for an unusual class like the paladin or barbarian, or you’re just scouting for an expanded selection of familiars and improved familiars, the Familiar Folio has you covered.

Featuring all-new items, spells, archetypes, and - of course -tons of familiars, this Pathfinder Player Companion is the perfect accessory for spellcasters as well as any Pathfinder player who fancies a fantastic travel-sized friend for their character. 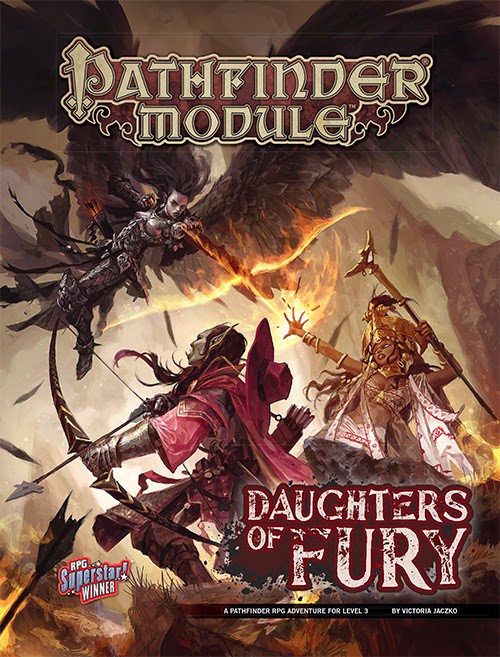 Fury has come to the border town of Arwyll Stead! Life on the fringes of orc-ruled Belkzen has never been easy, but since the last member of the Arwyll family was murdered things have become even more desperate. Orc-blooded terrors are killing the town’s defenders and threatening to lay siege, devils fly overheard, and the only half-orc who might know the secret of these nightmarish new invaders has been struck mute. Can the PCs manage to both keep the town from erupting into panic and discover what is behind the horrifying rash of infernal attacks?

The winning entry of Paizo’s 2014 RPG Superstar contest - in which unpublished authors compete for a chance to write a Pathfinder Module - “Daughters of Fury” includes not only Victoria Jaczko’s winning adventure, but also a selection of the best monsters submitted by other contestants!

Players can expect to reach 5th level by the time they complete this epic adventure double-threat, should they be able to survive both savage orc invaders and the agents of Hell itself! 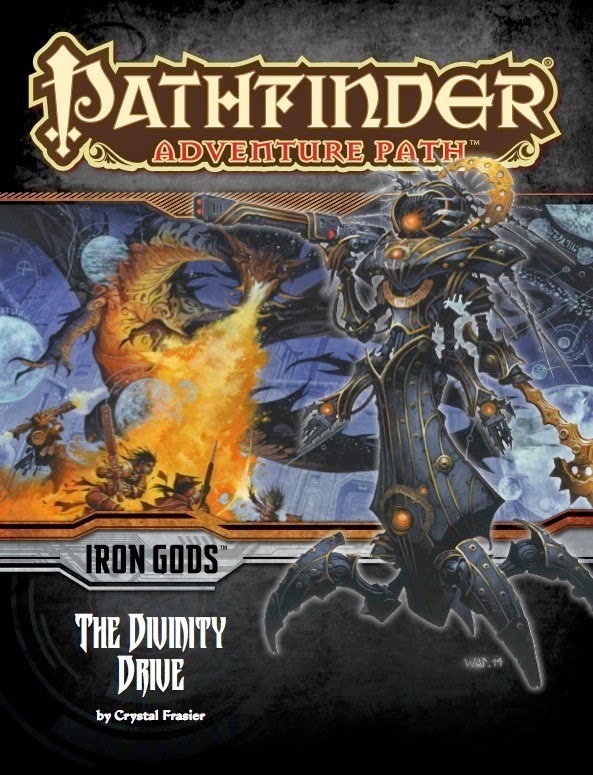 Silver Mount has long beckoned explorers and adventurers from across the Inner Sea with its promises of exotic, otherworldly treasures. Yet more than treasure waits within the alien chambers within this towering ruin - here, the greatest of the Iron Gods dwells, inexorably drawing its plans against the world of flesh and preparing for its final triumphant emergence from the eons of time. With allies recruited from across the land of Numeria and the brutish rulership of its capital city (for the time being) cowed, the time is right for the most extensive expedition into Silver Mount’s mysterious interior. What strange perils from beyond the stars await the heroes within the metal walls of one of Golarion’s most legendary dungeons, and could they just be walking into an Iron God’s trap?

“The Divinity Drive” is a Pathfinder Roleplaying Game adventure for 15th-level characters. The adventure concludes the Iron Gods Adventure Path, an exploration of the lands of Numeria, where savage barbarism clashes with the wonders and horrors of superscience. 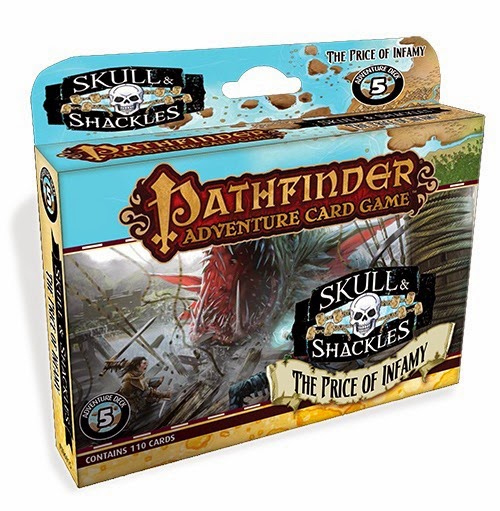 The whole of the Shackles is thrust into danger by a dastardly invasion plan. You’ll need to pull out all the stops to rally the defense of your home. Discover the betrayal behind the impending invasion with the Pathfinder Adventure Card Game: The Price of Infamy Adventure Deck. This 110-card expansion to the Pathfinder Adventure Card Game includes new locations, monsters, villains, and more, as well as rare loot cards and 5 new scenarios that make up the complete Price of Infamy adventure. 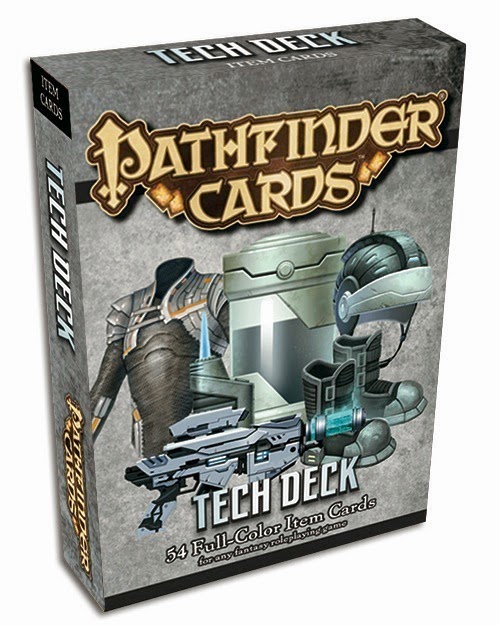 From the perilous holds of a crashed alien vessel, this deck presents a trove of treasures for use in any science fiction adventure, including laser rifles, gravity suits, nanite canisters, and other mysterious items inspired by classic sci-fi. Each of this set’s 54 beautifully illustrated, full-color cards includes space on the back to add notes for each item, allowing players to track their favorite treasures.

Pathfinder Item Cards allow heroes to keep track of their equipment in style. Each full-color card features a beautiful portrait of an item on one side with blank space on the back to keep notes. 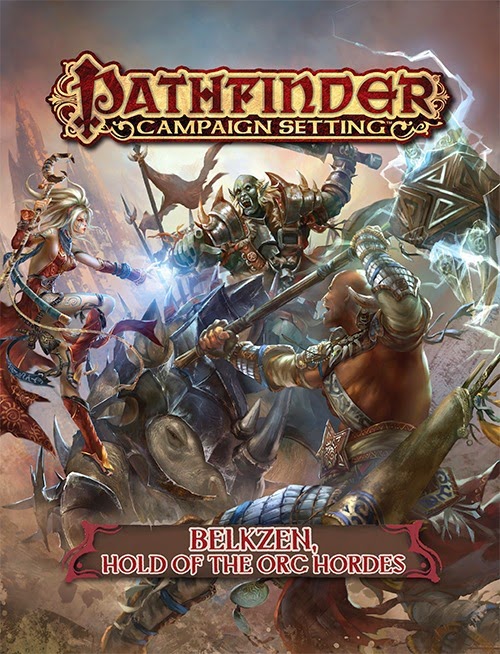 Prepare for war! The Hold of Belkzen, an orc-dominated wasteland, is as inhospitable as its bloodthirsty inhabitants. These dangers, along with a history of warfare and ruin, make it a land ripe for adventure, and Pathfinder Campaign Setting: Belkzen, Hold of the Orc Hordes gives Game Masters all they need to explore this savage setting.

This 64-page gazetteer of the Hold of Belkzen presents information on the region’s many dangerous geographical features and orc-run settlements, more than a dozen detailed orc tribes and adventure hooks to incorporate them into a campaign, and new monsters including the dread Juggerloathe, the haunting Burning Child, and orc-bred warbeasts. No Game Master running a campaign in or near the Hold of Belkzen should be without this must-have guide to one of the Pathfinder Campaign Setting’s most savage lands. 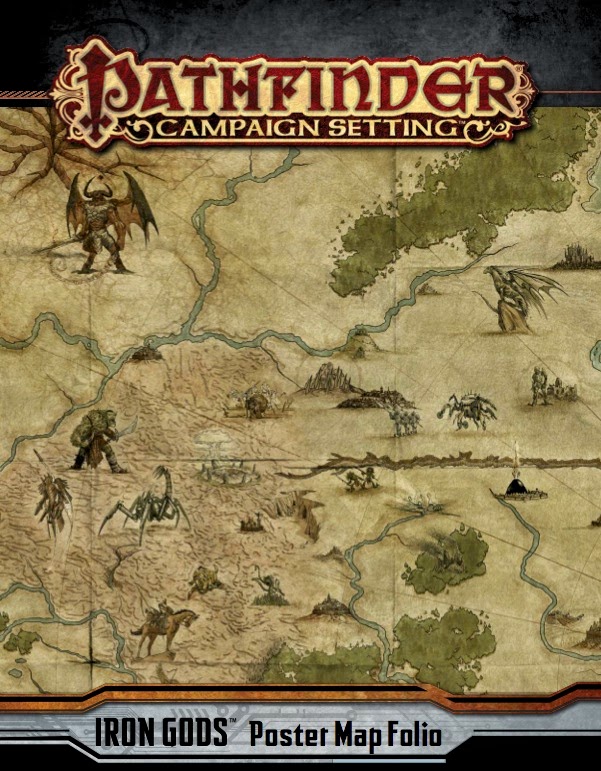 Explore Numeria, the land of super-science, with the Iron Gods Poster Map Folio! Pore over masterful cartography and plan countless adventures with these three massive poster maps designed for use with the Iron Gods Adventure Path. Huge, lavishly illustrated poster maps depict the strange and industrious town of Torch (the setting for the first Iron Gods adventure) and Numeria’s capital Starfall. The third map is a giant player-oriented illustration of the nation, presented as an ink-and-parchment drawing of this land of technology and superstition!

Whether you’re looking for a town to begin your adventures, a sprawling industrial city, or a land of robots and alien beasts, these beautiful maps are the perfect resource for the Iron Gods Adventure Path or any fantasy campaign. 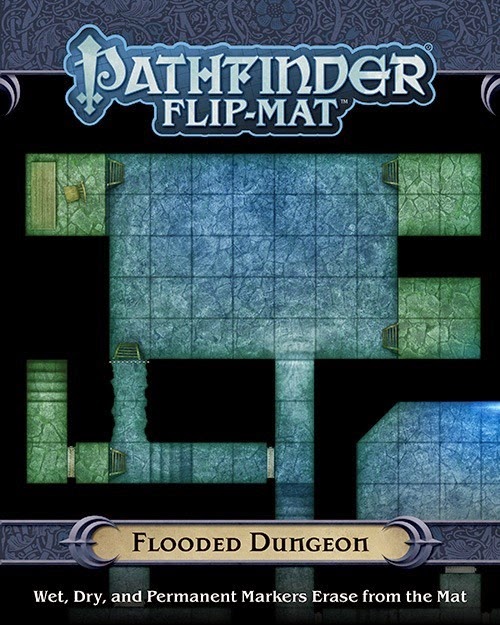 On tabletops across the world, the Flip-Mat Revolution is changing the way players run their fantasy roleplaying games! Why take the time to sketch out ugly scenery on a smudgy plastic mat when dynamic encounters and easy clean-up is just a Flip away? 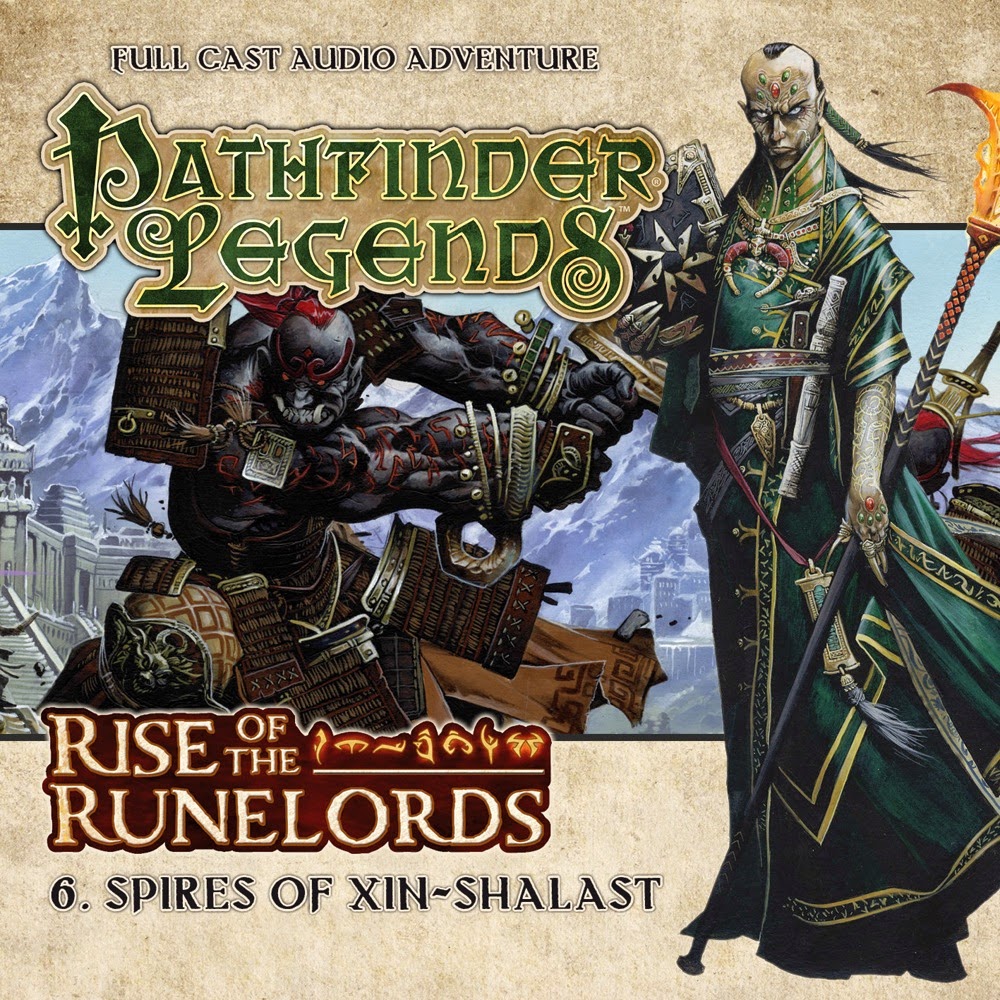 Armed with magical weapons, Ezren, Merisiel, Harsk, and Valeros travel across the icy wastes of the World's Roof to find the lost City of Greed.

With ghosts, wendigos, and giants standing in their way are they already too late? The Rise of the Runelords has begun and a terrible sacrifice must be made.

Pathfinder Legends audio dramas adapt the world and characters of the best-selling Pathfinder Roleplaying Game. Each episode runs about an hour and features a cast of professional actors, sound effects, and music that immerse you into the dangerous and exciting world of Pathfinder!
Posted by ACD Distribution at 2:30 PM