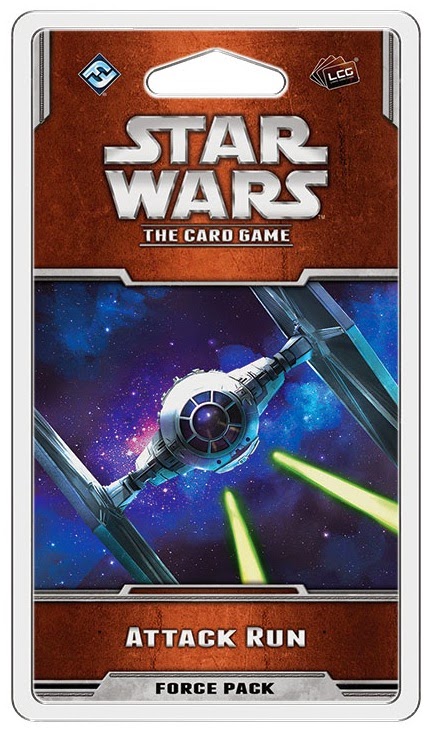 “The battle station is heavily shielded and carries a firepower greater than half the star fleet. Its defenses are designed around a direct, large-scale assault. A small one-man fighter should be able to penetrate the outer defense.”
–General Dodonna, Star Wars: A New Hope

With Attack Run, the fourth Force Pack in the Rogue Squadron cycle, you have the chance to relive the climax of Star Wars: A New Hope as the Rebel Alliance makes its desperate attack on the first Death Star.

In this Force Pack, you’ll find new Pilot versions of some of the game’s most iconic characters and their starships, including an Imperial version of Darth Vader with his specialized TIE Advanced, and a Rebel version of Luke Skywalker with Red Five.

In addition to these, you’ll find Jedi-faction Pilot Keyan Farlander and famed smuggler Platt Okeefe, alongside a new Pilot version of Boba Fett with Slave I. Attack Run also introduces two copies of a entirely new, highly potent, fate card to be found only within this Force Pack. 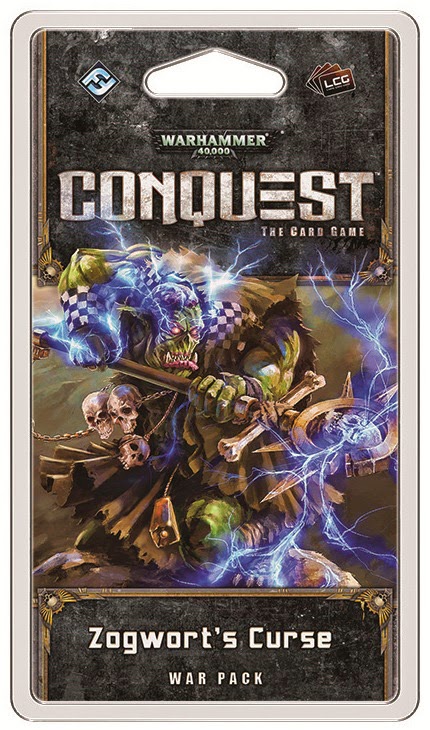 Unleash the power of the Waaagh! in Zogwort’s Curse, the fourth War Pack in the Warlord cycle for Warhammer 40,000: Conquest. The Orks find a powerful new psyker to lead them in this War Pack, allowing you to spread a green tide of destruction across the planets of the Traxis sector. Alongside the vicious Orks, you'll find powerful new vehicles for the Astra Militarum, dark wargear for the servants of Nurgle, and hideous Dark Eldar torture events.

This War Pack contains sixty cards, including one warlord with its signature squad and three copies each of seventeen unique cards, giving you a full play set of every unit, support, event, and attachment. You can join the hunt with the Space Wolves, fly with an Eldar Vyper Squad, or pilot Tau heavy battlesuits. No matter which faction you support, you’ll find plenty of cards in Zogwort’s Curse.

Warhammer 40,000: Conquest and your battles for the Traxis sector are full of lasguns, explosions, glorious death, and undying victory. As the Orks embark upon their latest Waaagh! and Daemons spill out of the Warp, you’re going to need more than a few frag grenades and a lightning claw in order to stand your ground. You’re going to need every weapon you can possibly cram into your deck, and then you’re going to need quality defenses. No matter what opposition you face, our Warhammer 40,000 Art Sleeves stand resolute in their mission to protect your cards.

Made of clear, 100 micron-thick, non-PVC, acid-free polypropylene plastic, Warhammer 40,000 Art Sleeves are free of damaging chemicals that could corrode your cards. Moreover, their snug cut makes them easy to shuffle and fits Warhammer 40,000: Conquest, all of our other LCGs, and most other CCGs, as well as any other standard-sized cards (card size: 2 1/2” x 3 1/2”).

As durable as these Art Sleeves are, they’re also inspiring. Each reinforces the quality of its defenses with stylish design. Whether you stand alongside the Ultramarines, follow a Tau Ethereal in the pursuit of the Greater Good, or seek to restore the Eldar to their former glory, you can find inspiration from these Warhammer 40,000 Art Sleeves. 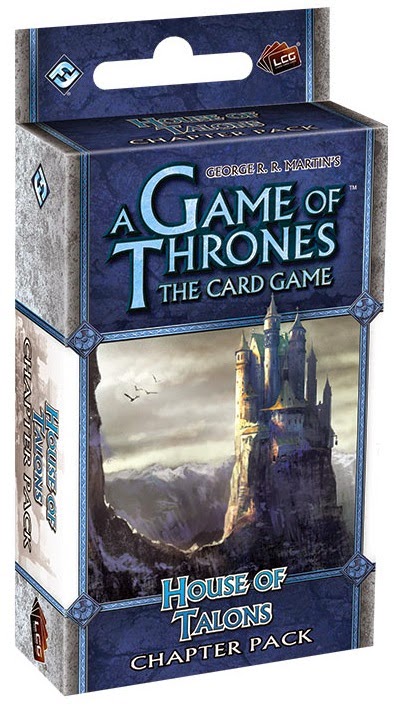 In this expansion, players also gain access to a new Castle plot and characters like Bronze Yohn Royce and Robert Arryn whose interactions with Castle plots can spur you to victory. 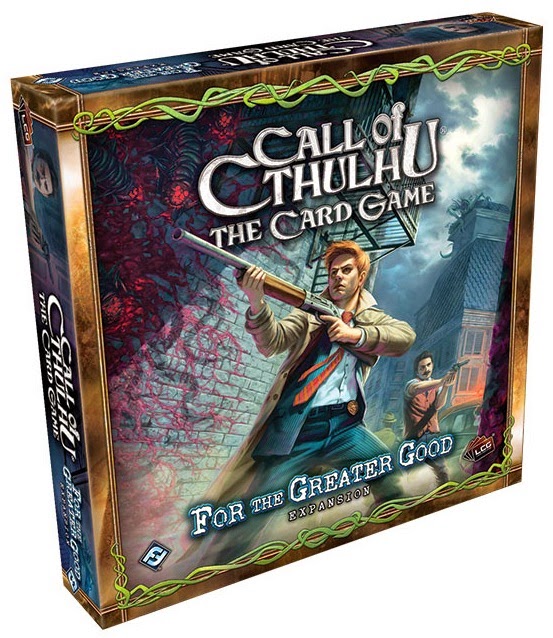 Polish your badges, grab your shotguns, and deputize the bravest and best of all the people close to you. The world is threatened on all sides by ghouls, cultists, monsters, and Ancient Ones, and humanity needs all the help it can get…

For the Greater Good is the eighth deluxe expansion for Call of Cthulhu: The Card Game, and it reinforces the Agency faction’s role as humanity’s defenders. Roughly two-thirds of the expansion’s 165 cards (three copies each of fifty-five different cards) lend new strength to the Agency’s heroic champions of law and order. 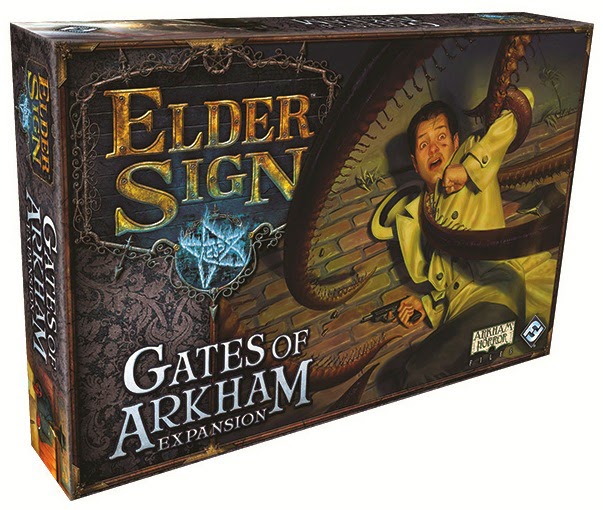 The search for elder signs leads you out of the museum and into the legendary and cursed city of Arkham in the Gates of Arkham expansion for Elder Sign.

A new deck of Arkham Adventure cards replaces the core set deck and completely transforms the game, taking you to infamous locations such as Velma’s Diner, the Curiositie Shoppe, and the Univited Isle. Meanwhile, gates to Other Worlds are opening throughout the city, destabilizing time and space as new Ancient Ones threaten humanity. Join forces with eight additional investigators, using new skills and memberships to find the enduring advantages you need to survive Arkham’s rough streets and prevent the Ancient Ones from awakening.
Posted by ACD Distribution at 2:30 PM