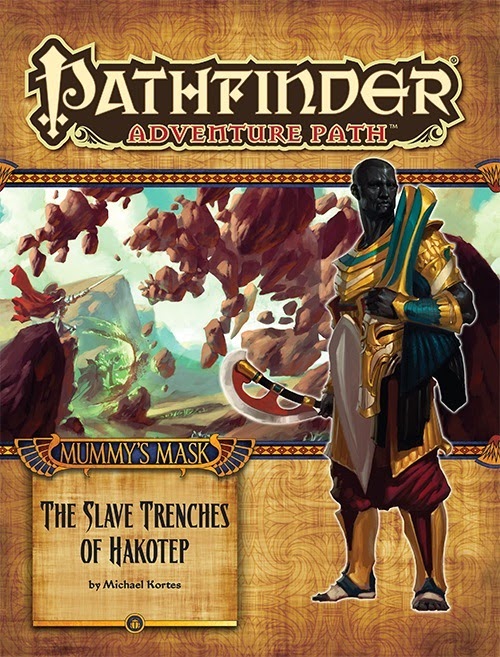 The Sky Pharaoh Hakotep I has risen and launched an attack against the city of Wati with his infamous flying pyramid. The heroes return to Wati to defend the city against this menace, only to discover that the attack is just the preface to a larger invasion of Osirion, controlled from Hakotep’s own flying tomb. Will the heroes call down the flying pyramid of the Sky Pharaoh from the sky, or will their bones join the thousands of skeletons that lie within the slave trenches of Hakotep?

“The Slave Trenches of Hakotep” is a Pathfinder Roleplaying Game adventure for 13th-level characters. Several new monsters, a selection of lost magical treasures that might be found in the tombs of Osirion’s pharaohs, an overview of the ancient Shory civilization and its magic and technology, and the next installment of the Pathfinder’s Journal written by Amber E. Scott round out this volume of the Pathfinder Adventure Path! 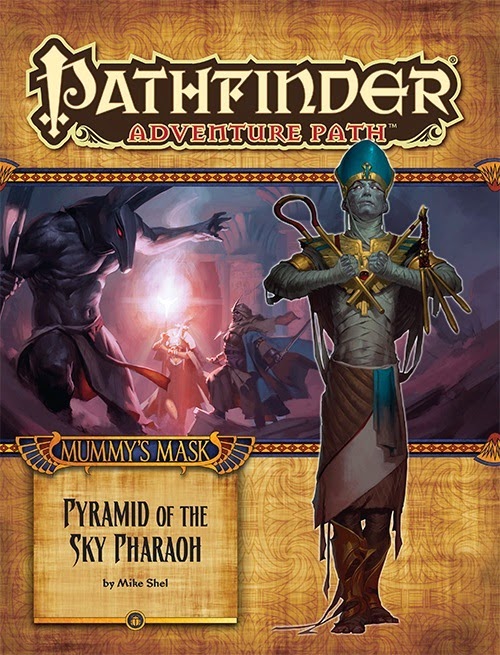 Hakotep’s flying pyramid has been grounded, but the heroes must enter the ancient tomb to deactivate the fleet of smaller flying pyramids poised to attack Osirion. Deep inside the Pyramid of the Sky Pharaoh, an untouched tomb from the heights of Ancient Osirion, the heroes face undying guardians woken from ageless sleep, climaxing in a final battle with the reborn Sky Pharaoh Hakotep himself. Will the heroes defeat Hakotep and reunite the pieces of his sundered soul to send it into the Great Beyond, or will Osirion enter a new age under the rule of an undead mummy from the distant past?

“Pyramid of the Sky Pharaoh” is a Pathfinder Roleplaying Game adventure for 15th-level characters. Several new monsters, a detailed exploration of the afterlife, ideas for further adventures beyond the bounds of the Mummy’s Mask campaign, and the final installment of Amber E. Scott’s Pathfinder’s Journal round out this volume of the Pathfinder Adventure Path! 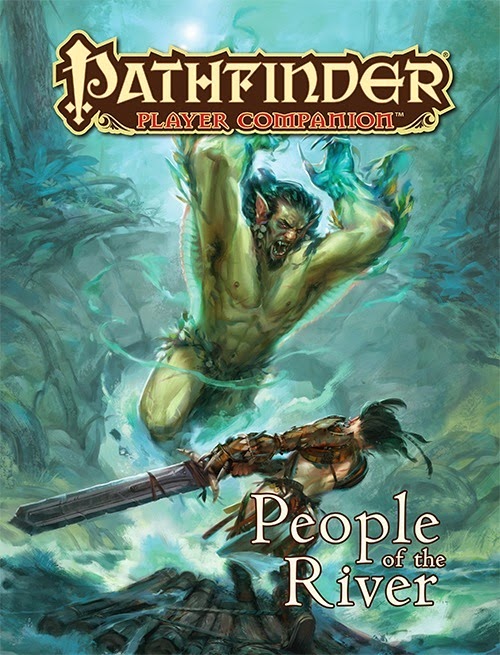 Make the secrets and tools of the mighty Sellen River yours with this guide to life along one of Golarion’s most important waterways. Whether you call upon the rage powers of Kellid barbarians or employ the dastardly tactics of Riverfolk bandits, the secrets of Numeria and the River Kingdoms are sure to float your boat. A perfect companion to the Iron Gods Adventure Path and Emerald Spire Superdungeon! 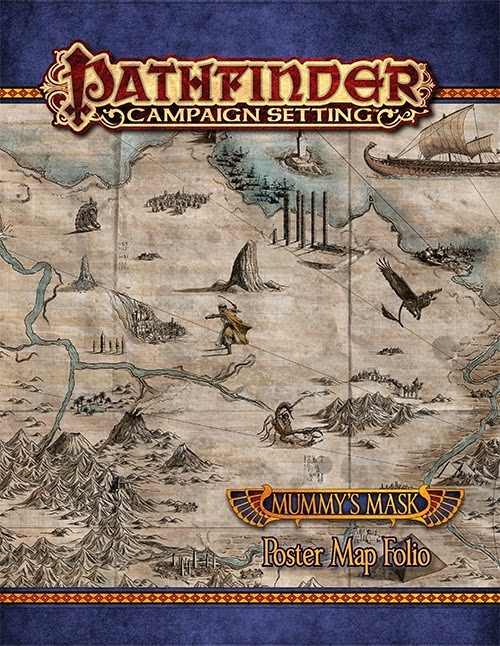 Designed to compliment and enhance play of the Mummy’s Mask Adventure Path, the three huge poster maps in this map folio are an invaluable aid for any campaign set in sands of Osirion and beyond. Included in this folio are a map of the macabre necropolis city of Wati, a map of the scholarly city of Tephu, home of Osirion’s Great Library, and finally a gorgeous player map of the nation of Osirion by popular Pathfinder artist Ben Wootten! You’ll never lose your way in the desert sands with the Mummy’s Mask Poster Map Folio! 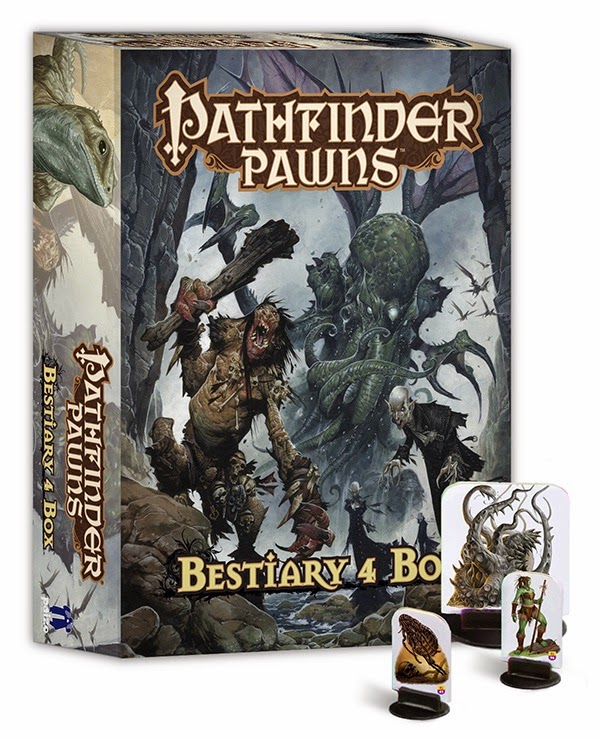 Confront your players with the star-spawn of Cthulhu or lure them into the clutches of a nosferatu as the monsters and mysteries of the Pathfinder RPG Bestiary 4 come to life on your table!

This collection features more than 300 pawns, each of which contains a beautiful full-color creature image. Printed on sturdy card stock, the pawns slide easily into size-appropriate plastic base, allowing you to quickly set up monster encounters.

With multiple pawns for commonly encountered creatures and hundreds of distinct creature images, the Bestiary 4 Box has exactly what you need to add dangerous thrills and memorable meetings to your tabletop! 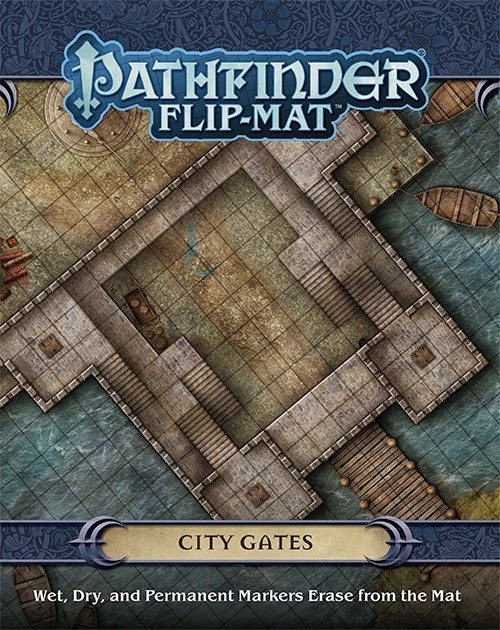 Whether you’re storming the gates or protecting them from invaders, you’ll stand your ground with Pathfinder Flip-Mat: City Gates. With a distinct city gate and wall battlements on each side, this durable accessory can serve as a setting for exploration, battle, or anything in between in any tabletop fantasy campaign! Don’t waste your time sketching when you could be playing. With Pathfinder Flip-Mat: City Gates, you’ll be ready next time your players do battle at the city’s edge!
This portable, affordable map measures 24” x 30” unfolded, and 8” x 10” folded. Its coated surface can handle any dry erase, wet erase, or even permanent marker. Usable by experienced GMs and novices alike, Pathfinder Flip-Mats fit perfectly into any Game Master’s arsenal! 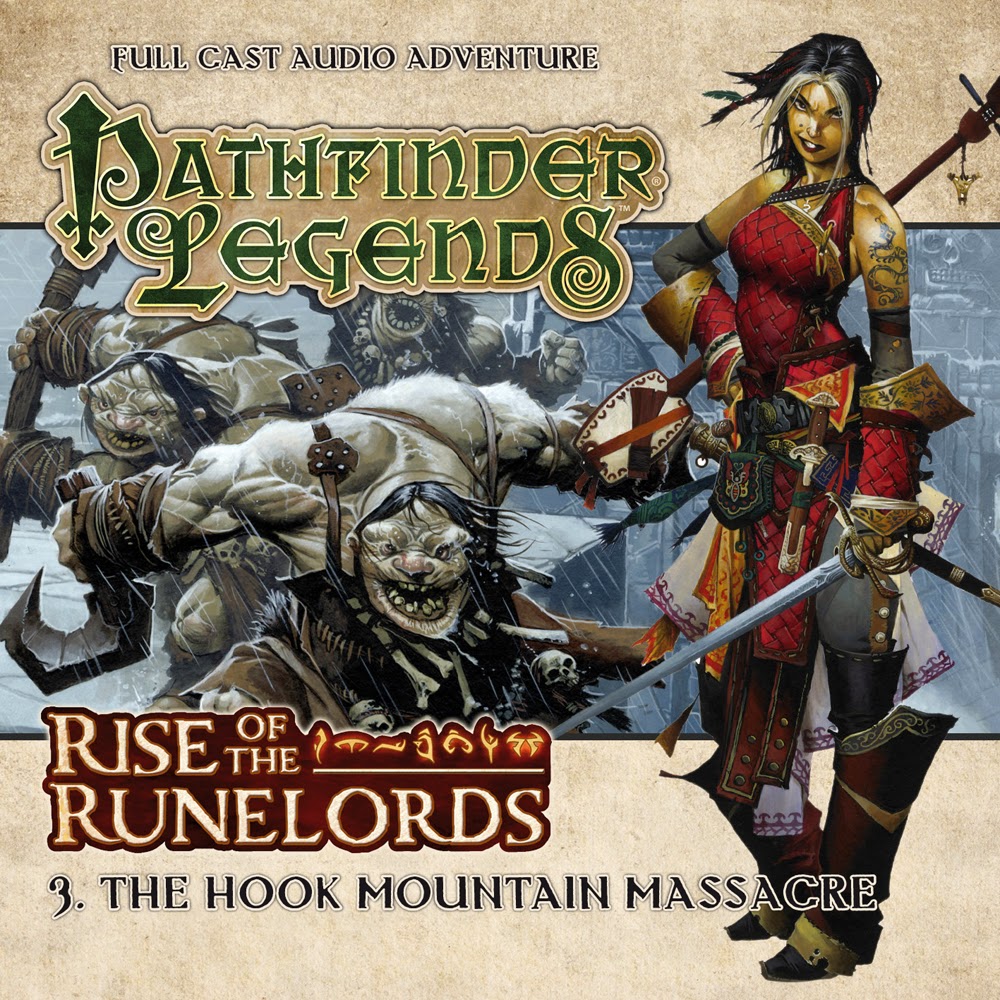 When communication is lost with the Black Arrow rangers of the distant garrison at Fort Rannick, the mayor of Magnimar dispatches Ezren, Merisiel, Valeros, and Harsk to investigate. As a storm brews over Hook Mountain, the adventurers find the fort ransacked and the Black Arrows massacred. Were they betrayed by one of their own, or are the local ogre clans preparing for war?

With rising floodwaters threatening to destroy the town of Turtleback Ferry, Ezren, Merisiel, Valeros and Harsk must face their destiny high up on Hook Mountain if they are to stand against the ancient evil returning to Varisia.

Pathfinder Legends audio dramas adapt the world and characters of the best-selling Pathfinder Roleplaying Game. Each episode runs about an hour and features a cast of professional actors, sound effects, and music that immerse you into the dangerous and exciting world of Pathfinder!