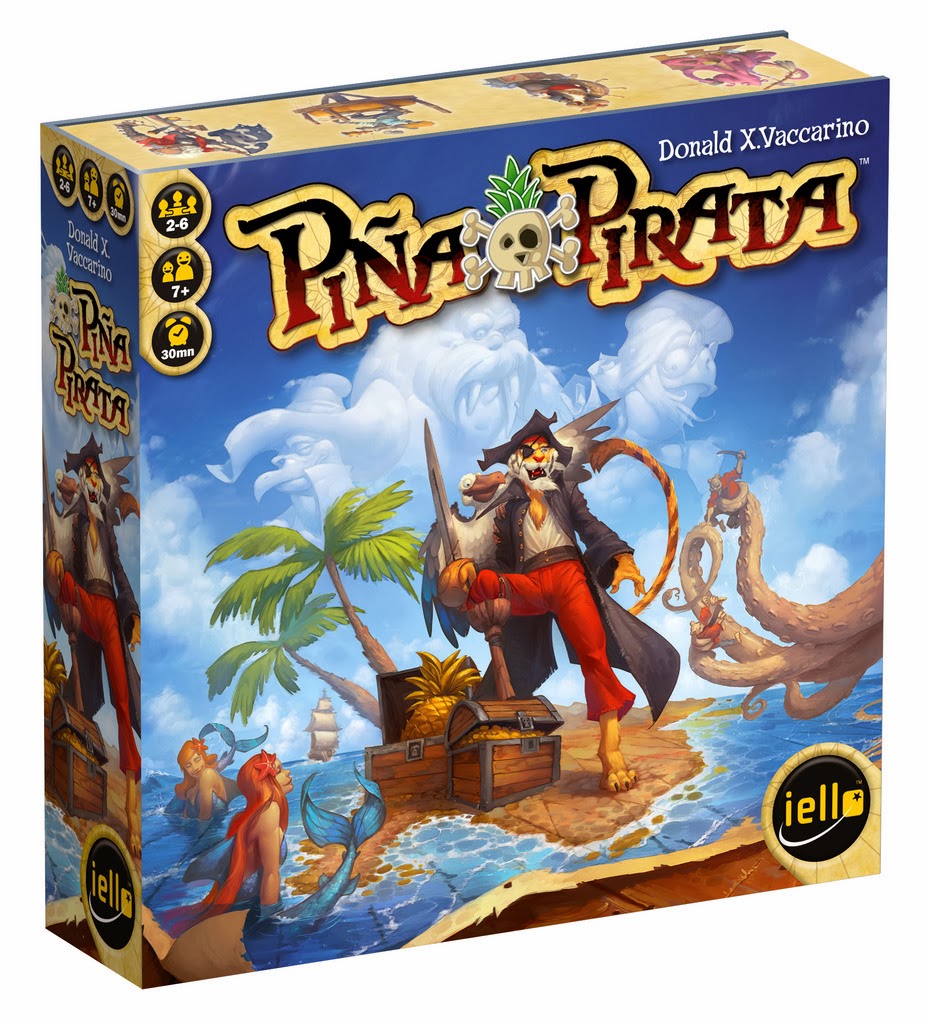 As captain of a pirate crew, your ultimate goal is to find the most incredible treasure of all times: the Golden Pineapple. The map leading to it has been cut in parts long time ago, and hidden in different places of the Caribbean Sea. In order to win the game, you will have to face and overcome all the other pirates also searching the Golden Pineapple map. Play your cards wisely to find the treasure and become a pirate of legends!

Piña Pirata is played in rounds. At each round, every player receives 8 cards. The goal is to be the first to get rid of all your cards.

At your turn, you must play one card, or draw one if you can’t. A card can be played if at least one of the pirates depicted on it is also on the top card of the play area. As soon as a player has no more card in her hand, she wins the round and gets a part of the treasure map. If a player has all 4 map parts, he wins the game!

The tricky part come from the Adventure tiles: At the beginning of the game, 2 tiles are revealed. Each of those Adventures is a new rule that will change the gameplay. There are more than 40 different tiles with a lot of different rules. Use them as their best to play more cards than you should or prevent the other players to play theirs!

At the end of each round, the winner chooses a new Adventure and adds it to the previous ones. The more the game is going, the more special effects are triggered for more and more fun! 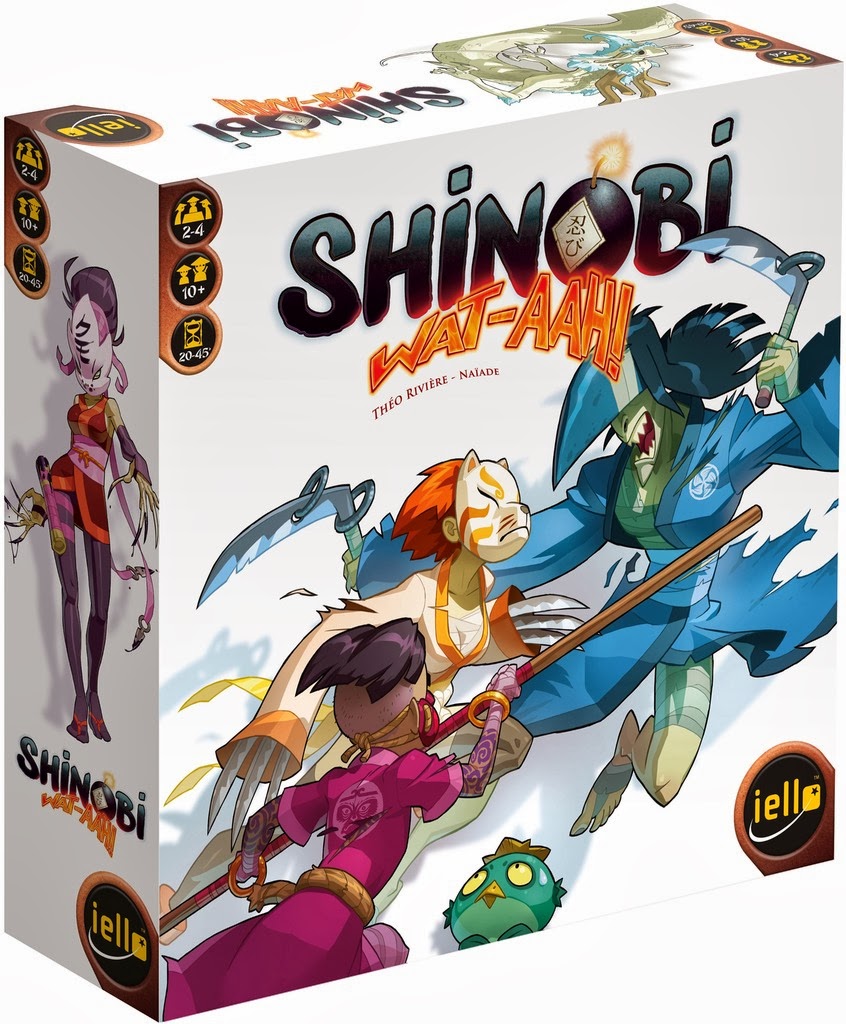 The Empire of the Moon faces many threats. The Rift has reopened, providing passage for the creatures that have lurked in Shadow for millennia. But the danger also comes from within as the Emperor, son of the Moon, is getting old, and his formerly loyal lords are now trying to seize power. In order to do this, they make their appeal to the warriors known as ninjas, adepts of the way of Shinobi. The clans are finally prepared for war!

As a lord with a thirst for power, in Shinobi WAT-AAH! you plan to place your honorable posterior on the imperial throne. In order to do this, you will appeal to the large clans of ninjas, who will enable you to impose your military strength upon your enemies. To put it simply, your goal is to put a big WAT-AAH! in your enemies' faces!

Shinobi WAT-AAH! includes two game modes:
-Grasshopper Mode lets you get started right away in the art of Shinobi with short games.
-Grand Master Mode trains you over the course of three rounds, leading up to a most surprising final confrontation! 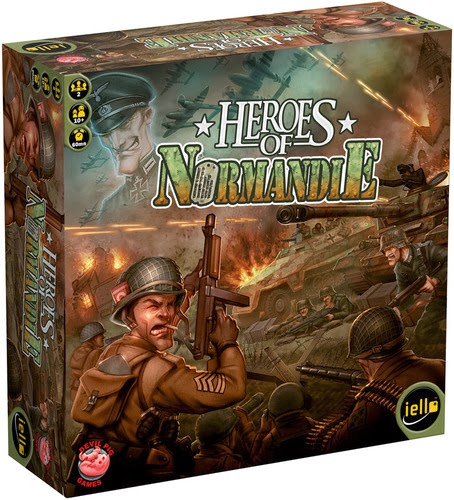 The time is summer 1944. The Sun shines on Normandie hedgerows. Gentle wind, fields of bright flowers, and in the background, the romantic staccato of machine gun fire in the morning. In these typical French countryside landscapes, thousands of men are about to fight. And die. Bravely like heroes, or cowardly like wussies. But only heroes really matters. Those you see in Hollywood Golden Age war movies. Here lies the inspiration for Heroes of Normandie; here is what the game has to offer: explosive and fast-paced battles; the pleasure of butchering your enemies through MG42 walls of lead; and the ability to crush Nazi bastards under tons of shells – basically, blood and guts.

A miniatures game without miniatures, Heroes of Normandie is a fast-paced WW2 strategy wargame inspired by Hollywood war movies. A tactical scale board-game opposing two players and two armies, with the Germans on one side and the Americans on the other. Players use order tokens to determine initiative and to bluff. While a single six-sided die determines combat, action cards are played to spice things up. Secretly plan your attacks and outwit your opponent. Block the opposing strategy and surprise the enemies. Deploy your units and don’t turn back! 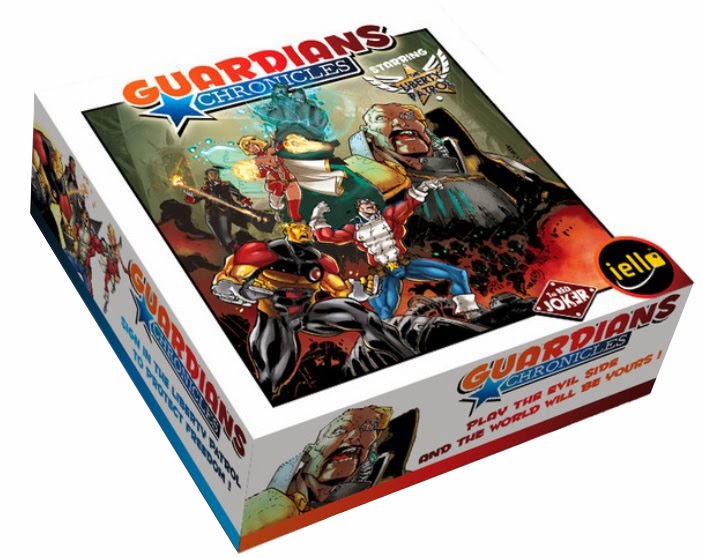 Guardians Chronicles is a superhero-themed miniatures game in which you play as one of the members of the Liberty Patrol or as the group’s archnemesis, Professor Skarov.

To set up, the Skarov player arranges the nine double-sided game board tiles into a 3x3 grid, with his control room in the center space. Each player takes her character sheet, miniature and 7-10 action cards. These characters enter the grid on one of the side tiles and need to advance around the square – confronting minions and traps along the way – in order to achieve whatever objectives are in place for this game, such as thwarting a nuclear missile attack.

Professor Skarov then receives a number of action points based partially on the heroes’ actions, and he uses these to activate himself, his minions, or his robots, with these figures also performing move, attack, or special power actions.
As the players complete (or fail to complete) objectives, the newspaper’s report on who did what, and the sum of those reports determine who comes out on top.