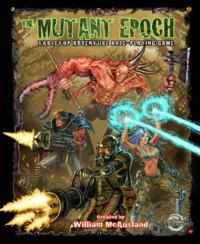 The Mutant Epoch RPG (Post Apocalyptic RPG) The Mutant Epoch™ post-apocalyptic RPG challenges your in-game persona to survive in an age of rediscovery, high adventure, savage conflict, and freakish mutants and machines. Characters work in small excavation teams making forays into ruined cities, through junk strewn wastelands, twisted forests, nightmarish swamps and across polluted seas. During their expeditions they must contend with mutant beasts, the environment, as well as raiders, cultists, and robotic forces, only to stake their place in the newly emerging barter forts and factional bastions of humanity. Players can take on the roles of pure stocks, mutants, ghost mutants, cyborgs, beastie humans and an assortment of synthetic or engineered humans. All you need is this book, dice, paper and pencils, a few friends and your imagination. The Mutant Epoch™ uses the Outland System™ game mechanic, which employs the full set of polyhedron dice, is easy to learn, logical, fast paced, and perfectly suited to the hard core action of post apocalyptic game play. Inside this lavishly illustrated book you will find all the rules, art and content to generate characters, challenge them with perils, and then reward them with potent relics. 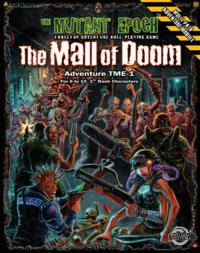 Mall of Doom (Mutant Epoch Adventure) Recruited to investigate the disappearance of missing townsfolk, the heroes soon discover that there is more to these kidnappings than meets the eye, and that these explorations aren’t just a ruin-crawls into the crumbling old mall. Can your characters survive the challenges that await them, or will they meet their end someplace deep below a besieged post-apocalyptic village? The Mall of Doom uses the Outland System™ game mechanic and requires only The Mutant Epoch™ hub rules RPG book to play. 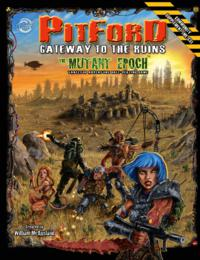 Pitford: Gateway to the Ruins (Mutant Epoch Supplement) Pitford is like a great immobile tank, stuck on the battle scarred, hostile plains in the shadow of the Great Ruins. This scrap metal enclosure is more than a home base for excavators; it is a dynamic adventure site, where opportunity, riches, espionage, crime, and debauchery await. Herein, game sessions are as challenging and deadly as anything found outside of its junk and concrete shell. The fortress-town stands as a frontier bastion for a hard pressed humanity, providing a retreat from the harsh sand storms and flesh eating mutated beasts of the wilds. With one road leading in at the south and another at the north, it is stopping place for travelers, outlaws, savages, scavs, runaways and most of all, excavators. For over eighty years this fort has served as a base camp for dig teams who loot the boundless ruinscape beyond, where the lucky make it back alive with artifacts of enormous wealth and power. This book is both a game master reference resource, as well as a guide for players whose characters are visiting the bustling, old west style boom town. Included are 56 shops and businesses, 33 streets and alleys, access points to the topside roof, and stairwells to the notorious basement level. In addition, fortress defenses, gatehouses, and town watch details are included, along with a robust section on the municipal jail with encounters for those incarcerated within. Also included are series of adventure hooks, appendices, map collections, the governing Association of Business Owners and the Freehold Scouts. Situated in the north east corner of the Crossroads Region, Pitford figures heavily in upcoming adventures published for The Mutant Epoch role-playing game. While having this book isn’t necessary, it would enhance game play and provide details on resources adventurers need to recover, resupply, and recruit new excavators. 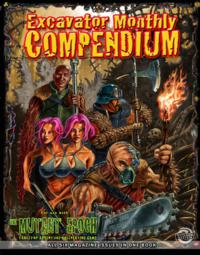 Excavator Compendium (The Mutant Epoch Supplement) Each article, relic, mutant beast, non-player character and other feature has been placed into categories within this hefty tome. Never forget a copy again. Both game masters and players of The Mutant Epoch role playing game can carry all the magazines in one handy book and quickly flip to any resource with ease.
Posted by ACD Distribution at 9:00 AM