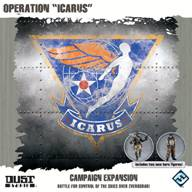 A new campaign expansion for Dust Tactics, Operation “Icarus” relates the first thrust of a major Allied assault against the Axis forces holding Zverograd’s pivotal airfield. Operation “Icarus” introduces new rules for minefields, trees, and the quonset huts in which the Axis forces await the Allied assault. Two new heroes join the fray, including the Allied superhuman, Sgt. Victory. All these elements come together in seven tense and ferocious scenarios as the blocs of Dust Tactics vie for control of the airfield and the skies. 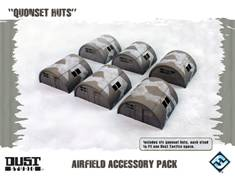 Quonset Huts The Airfield Accessory Pack adds six quonset hut sections to your games of Dust Tactics. Introduced in Operation “Icarus,” quonset huts are a new type of structure that can be erected quickly to provide soldiers with sturdy shelter against the elements. They can also be joined together to create longer structures with a variety of strategic arrangements. The Airfield Accessory Pack allows you to enhance your battlefields, provide your soldiers with cover, and develop your bases. 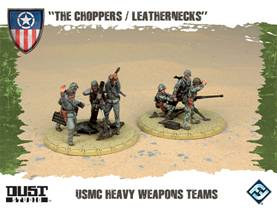 In the alternate-reality 1940s of Dust Tactics and Dust Warfare, the United States Marine Corps have come to value the ability to move quickly over terrain, and a small team carrying heavy weaponry is sometimes the best option for getting fire support into position. The two squads of the USMC Heavy Weapons Teams are veterans of many campaigns, men who remain fearless even when heavily outnumbered. The Choppers field a .50 cal machine gun, and the Leathernecks batter foes with their 120mm heavy mortar. 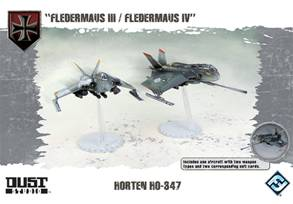 The two variations of the HO-347 have placed the Axis on the brink of a long-awaited resurgence of air superiority in the fierce battles of Dust Tactics and Dust Warfare. The introduction of VK engines has permitted the Axis’ newest aircraft to fly faster and climb higher than anyone believed to be possible just a few years ago. The Fledermaus III is both a fighter and an effective ground-attack plane while the Fledermaus IV is a fighter/bomber 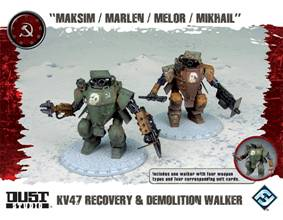 Recovery & Demolition Walker The SSU forces of Dust Tactics and Dust Warfare gain new strategic options for battlefield deployment with the KV47 Recovery & Demolition Walker. Its four different models were developed to allow SSU battlefield forces to recover valuable VK materials and prevent the theft of the SSU’s VK technology. The walker’s armor provides SSU engineers protection from enemy fire in the heat of combat even while its equipment allows them to swiftly salvage materials and fend off enemy infantry and tanks.
Posted by ACD Distribution at 9:13 AM