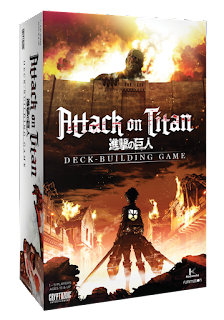 The last human city is under attack by giant, fearsome Titans and it's up to your team to stop them! Based on the action from the world-renown Attack on Titan anime and manga series, you and your fellow players will battle relentless Titans for humanity's very survival in this cooperative deck-building game. Collect the weapons and tactics you need, then test your mettle on  the wall before it's too late.

Play as Eren, Mikasa, Armin and many others as you struggle to keep the Titans at bay. New to this Cerberus Engine game is movement. The location of your Hero in the game area matters. Protect the walls or watch them crumble. But do not lose hope, no matter the odds and no matter who among you falls to the onslaught. It may soon be up to you to land the killing blow that will turn the tide of battle... 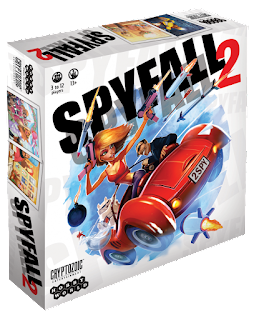 The hit social party game of 2015 & 2016 is back with more of everything you loved about the first game! More players, more spies, more locations, and more terribly vague answers to half-baked questions!

SPYFALL is an easy-to-learn card game of bluffing, probing questions, clever answers, and suspicion. At the start of each round, players receive a secret card letting them know where they are—a vineyard, jail, coal mine, gas station (20 unique locations!)—Except that one player receives the SPY card instead of the location. The spy doesn't know where he is, but wins the round if he can figure it out before he blows his cover!

New to this expansion:
Now games might feature TWO SPIES! When one tries to guess the location, the other one takes a guess as well. Now up to 12 players can play at once! Bigger games means more finger-pointing and shenanigans. 20 new locations adds tons of crazy new fun! 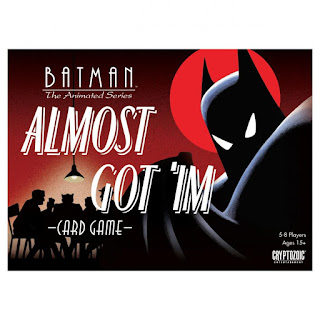 The villains of Gotham City have gathered for a poker night and to share stories about the time they nearly dispensed with that troublesome caped crusader, Batman. Little do they know that the Dark Knight is in their midst, disguised as one of their own. Will the rogues be able to suss out the bat in their belfry before he clandestinely subdues them?

This variant on the popular Werewolf-style deduction game, inspired by the memorable Batman The Animated Series episode "Almost Got 'Im", adds a poker element to the proceedings, requiring participants to craft poker hands to activate their special abilities when the lights go out. Take on the personas of classic Batman baddies in a game where everyone has something to hide and no one is safe.

With Poker hands guiding the action players have something to talk about. Everyone has an important role. No bystanders in this game! Too often, social deduction games begin with random accusations just to get the ball rolling. Not so here. Players can request Poker cards from other players, and often see what cards other players are taking. Enemies are made when someone takes the card you wanted now you have a reason to be suspicious of another player!

CTZ02184
Attack on Titan: The Last Stand - Tactical Board Game 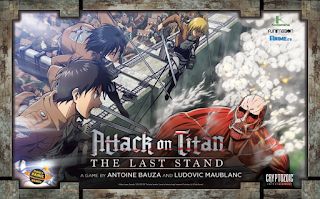 It's all come down to this. Titans have broken through Wall Maria and are heading for the supply depot in Trost. If the depot falls, all the resources needed to continue fighting off these monstrous aberrations will be destroyed and all hope for the last remnants of mankind will be lost. It's up to you and your team to fend off and fell the Titans before they can succeed! Are you ready for the last stand?

Play as your favorite Attack on Titan Character... or as the Titan!

During each round of the game, the Titan player chooses two Attack cards to play: One face up and one face down. The other players then roll their dice and try to avoid these Attacks, but knowing only what one of them is. The other will be a surprise, so players will have to use their wits to figure out what they need to avoid it. Protect your very lives and the castle walls to save the day!

Positioning is key! The Titan and the castle walls create a vertical playing surface. Move your character up and down as you see fit to avoid Attacks, or tactically position yourself to land a devastating blow on the Titan. Tactics Cards can be revealed and utilized or passed on until later. Your goal is to weaken the Titan so that it's susceptible to a kill shot. But watch out! The Titan has lots of tricks waiting for you. 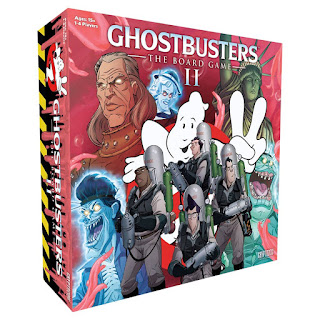 CTZ02103
Ghostbusters: The Board Game II

Building on its highly-regarded predecessor, this massive stand-alone expansion has 1-4 players taking on the roles of the Ghostbusters as they investigate the Mood Slime that has flooded the city, causing earthquakes and riots in an attempt to bring Vigo and his minions back. Inspired by the Ghostbusters movies, comics, and toy lines, the Campaigns have you taking on the Scoleri brothers, riding the Statue of Liberty, and battling through Vigo's Ghost army. The numerous new Ghosts, enemy types, and Bosses will make busting an exhilarating challenge!
Posted by ACD Distribution at 4:53 PM