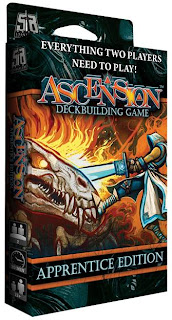 Recruit Heroes to your cause and wield powerful Constructs as you battle to become the champion of Vigil! This 2 player version of the Ascension: Deck building Game has new art, new frames, and has been rebuilt to be the best introduction to the game possible. At a fraction of the price of every other deck building game on the market, this is the perfect product for new players to Ascension and the deck building genre! 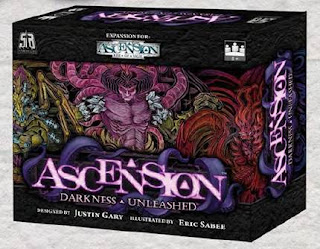 New Energize cards, including Heroes and Constructs that transform into even more powerful forms!

Harness the power of Dark Energy Shards, a new take on the Treasure cards introduced in Ascension: Rise of Vigil!

Playable as a stand-alone 2-player game, or combine with Ascension: Rise of Virgil for an expanded game with up to 6 players!

Posted by ACD Distribution at 3:46 PM