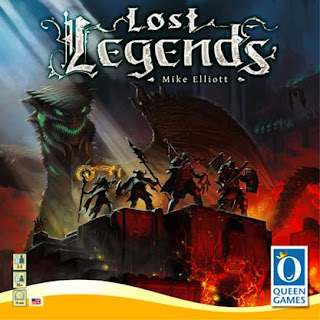 In Lost Legends, players take on the role of heroes trying to assemble an arsenal of equipment in order to battle increasingly ferocious monsters as they quest deeper into danger. The game begins with all players choosing one of five heroes each with their own strengths and weaknesses. Each player fights their own monster; this is not a cooperative game. The monster each hero will likely face is revealed to them before players draft cards for their equipment. An interesting aspect in this game is you may, if the conditions are right, evade a monster in front of you, and pass it to the hero next to you but at the cost of having to fight the monster you draw next!

Players then select an equipment card drafted from a hand of cards, and pass the remainder of the hand to your left to prepare for battle with the monster in front of them. The equipment draft continues in this manner until only one card is left in each hand, which is discarded. Players then compare their drafted equipment to their monster to determine the result of the battle! The game consists of 3 levels filled with monsters to slay and new equipment to pick up.

Players need Legend Points to win the game! These come in the form of trophies awarded for most monsters as well as sets of monsters slain. Can you defeat the monsters thrown in your path to glory and become the most Legendary? 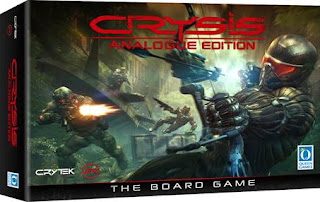 Crysis Analogue Edition transfers the unique game play of the award-winning and bestselling  video game series Crysis to the game board! 2 to 8 players form two teams (CELL vs. US Forces) and battle for supremacy in futuristic New York in 14 different scenarios. Depending on the chosen scenario, each game takes about 90+ minutes to complete. The game is driven by the playing cards and emphasizes rapid and varied action.

Be fast! Be strong! Be invisible! Be the weapon!

Posted by ACD Distribution at 4:19 PM