Scheduled for May Release! 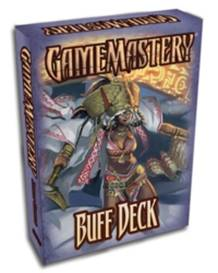 PZO3023
Buff Deck
$ 10.99 SRP
SDI
Track your hero’s bonuses and important status effects with the GameMastery Buff Deck! This beautifully designed accessory speeds up play and cuts down on rulebook consultation during battles by laying out your character’s relevant bonuses in an easy-to-add format. From spells like bless, haste, and prayer to class features like a bard’s inspire courage, the Buff Deck puts all the details at your fingertips, leaving you to concentrate on smiting your enemies! 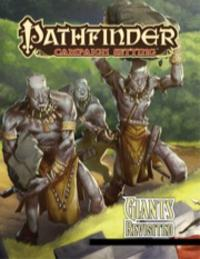 PZO9245
PFCS: Giants Revisited
$ 19.99 SRP
SDI
This sourcebook explores the societies, ecologies, mythologies, and secrets of ten of the most memorable races of giant-kind, including hill giants, stone giants, frost giants, fire giants, cloud giants, storm giants, rune giants, marsh giants, taiga giants, and Cyclopes. Each chapter includes full statistics for a sample leader or jarl as well as new rules like feats, spells, and magical items crafted not just by these towering monsters, but by those who seek to fight against them. by Jason Nelson, Brian R. James, Ryan Costello, Ray Vallese, Russ Taylor, and Jesse Benner 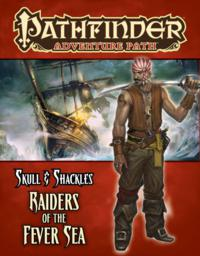 PZO9056
PFA: Raiders of the Fever Sea
$ 19.99 SRP
SDI
Chapter 2: "Raiders of the Fever Sea" by Greg A. Vaughan Now masters of their own ship, the adventurers can become pirates in their own right, but they must first rename and refit their stolen ship. But to be considered equals by the pirates of the Shackles, they have to prove themselves worthy of the name. When they discover a treasure map tattooed on a defeated pirate rival, the adventurers go in search of buried treasure. If found, they’ll have enough plunder to return to the Shackles as true Free Captains! A Pathfinder Roleplaying Game adventure for 4th-level characters, this volume continues the Skull & Shackles Adventure Path. This volume of Pathfinder Adventure Path also reveals details on Torag, god of the forge, as well as a gazetteer of locations and menaces that lurk beneath the waves of Golarion’s vast and varied oceans. New monsters from the depths of the sea and exotic islands also fill the Pathfinder Bestiary, while Robin D. Laws (author of the Pathfinder Tales novel The Worldwound Gambit) continues his tale of pirates and lost treasures in the Pathfinder’s Journal. 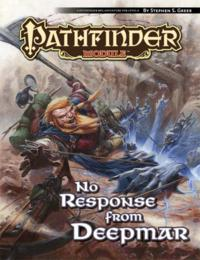 PZO9536
PF Module: No Response from Deepmar
$ 13.99 SRP
SDI
A dungeon and wilderness exploration adventure for 8th-level characters The island penal mining colony of Deepmar off the north coast of Cheliax has provided the infernal House of Thrune with a steady supply of valuable crystals for decades, but now all contact with the island has ceased. Sent to the isolated island to investigate, the heroes must explore the eerily abandoned mining colony and the surrounding island to discover what sinister threat has silenced the settlement and interrupted the steady flow of minerals from the colony’s mines. Can the heroes discover the truth behind the disappearance of the island’s inhabitants and get the rich resources of Deepmar flowing to the mainland again, or will they too vanish, never to be heard from again? 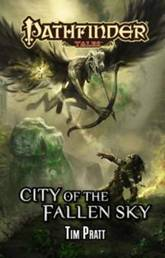 PZO8508
PF Tales: City of the Fallen Sky
$ 9.99 SRP
SDI, SOO
Once a student of alchemy with the dark scholars of the Technic League, Alaeron fled their arcane order when his conscience got the better of him, taking with him a few strange devices of unknown function. Now in hiding in a distant city, he’s happy to use his skills creating minor potions and wonders—at least until the back-alley rescue of an adventurer named Jaya lands him in trouble with a powerful crime lord. In order to keep their heads, Alaeron and Jaya must travel across wide seas and steaming jungles in search of a wrecked flying city and the magical artifacts that can buy their freedom. Yet the Technic League hasn’t forgotten Alaeron’s betrayal, and an assassin armed with alien weaponry is hot on their trail... 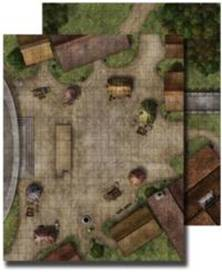 SQW30045
Flip-Mat: Town Square
$ 12.99 SRP
SDI
Fend off invasion or throw a festival upon this sweeping tactical map depicting the central square of a fantasy town! Designed specifically for use with the opening encounter of the Pathfinder Roleplaying Game’s Rise of the Runelords Adventure Path but suitable for any urban engagement, this durable accessory sets a central scene for any tabletop fantasy campaign! This portable, affordable map measures 24" x 30" unfolded, and 8" x 10" folded. Its coated surface can handle any dry erase, wet erase, or even permanent marker. Usable by experienced GMs and novices alike, GameMastery Flip-Mats fit perfectly into any Game Master’s arsenal! On tabletops across the world, the Flip-Mat Revolution is changing the way players run their fantasy roleplaying games! Why take the time to sketch out ugly scenery on a smudgy plastic mat when dynamic encounters and easy clean-up is just a Flip away?
Posted by ACD Distribution at 11:13 AM