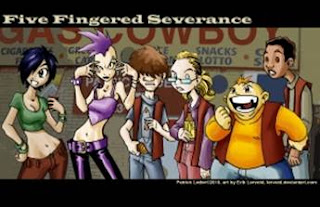 Today is your last day on the job. Corporate decided to close the store and everybody is getting the boot. You could spend the rest of the day helping those miserable, wretched wastes of human skin who come in and demand service, or you could do what you always wanted - tell them were to go and have a good time. And you know which one it's going to be...
In Severance each player assumes the role of one the characters at the store. They can steal items from the store, slack off, or keep performing their work duties. Each activity has risks and rewards. The player scores points after successfully slacking off and after taking their stolen goods to their locker. When a player gets caught (by the boss) doing something wrong they gain heat. Heat also naturally rises during the game. When a player reaches 30 they are fired. The game ends when all of the players but one is fired or the event deck is exhausted. 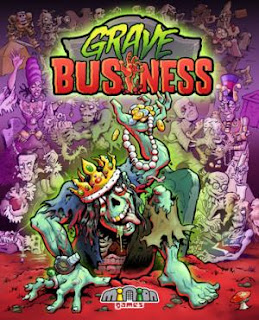 You are a Necromancer. In fact, you are a particularly dangerous one, as you are a Necromancer with a business plan. Your zombies will dig up and loot valuables from graves, and while they're there, they can also grab fresh body parts so you can make MORE zombies to dig up MORE graves. Sounds good, right? Unfortunately, it's so good that other Necromancers are now competing with you for the choice cemeteries!
Players start with zombies of varying values. They take turns placing zombies in specific location to "dig" up graves, steal from opposing laboratories and vaults, and to attack other player's zombies to try and prevent them from digging or stealing (and possibly dismember the opposing zombie beyond further use).
Once all the zombies have been placed, zombies still in position will steal body parts or treasure from opponents, and those set to dig will dig the row, column, or specific space of the graveyard they are assigned to. If you are competing for spaces in the graveyard (which is the norm), players compare the combined brainpower of their digging zombies, and the higher value gets to the contents of the grave first.
Then you may use your new-found corpse pieces and equipment to assemble new zombies to do your bidding!
The goal is to have the highest total in treasure and unused body parts at the end of the game. 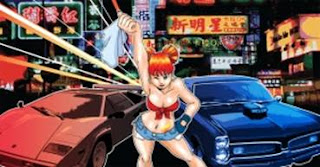 You have the Car. You have the Nerve. Do you have what it takes to win on the open streets in a nitro-burning race for fame and fortune? It won't be easy with opponents that know how to cheat the game and drive the winding streets. You'll be dodging them and anything they can throw at you. Whoever drives fastest, smartest, and toughest will become the Nitro Circuit champion.

Nitro Dice is a fast-paced card-driven racing game where pushing the limit of safety is part of the fun. In Nitro Dice players use a ten-sided-die to represent their race car on a course made of cards. 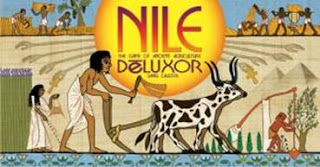 Nile deLuxor is a bundle of the base euro-style NILE card game with an included expansion printed on premium card stock.