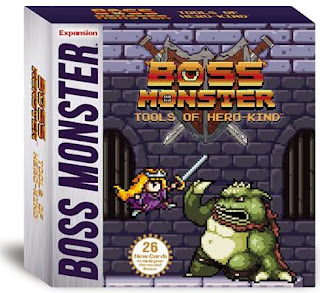 The adventurers strike back in this 26-card mini-expansion for Boss Monster!

New Item cards power-up Heroes with abilities like Cheat Code and Extra Life. Can your Boss handle the challenge? 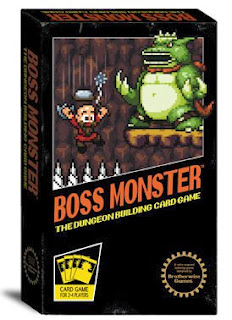 Inspired by a love of classic video games, Boss Monster is a “dungeon-building” card game that pits 2-4 players in a competition to build the ultimate side-scrolling dungeon.

Players compete to lure and destroy hapless adventurers, racing to outbid one another to see who can build the most enticing, treasure-filled dungeon. Players compete to see who can lure and destroy the most adventurers. But beware! You must make your dungeon as deadly as it is attractive, or the puny adventurers might kill you first! Are you a bad enough dude to become the ultimate Boss Monster?

Boss Monster is designed for anyone who loves classic gaming, from OD&D to NES. The artwork, by talented pixel artists like Katrina Guillermo (Super Apartment Bros) and Kyle Merritt (EvoCreo) is richly detailed and full of geeky pop-culture references.

From the game’s mechanics to its colorful characters, it combines the best of modern hobby gaming with a potent dose of nostalgia!

Posted by ACD Distribution at 3:38 PM