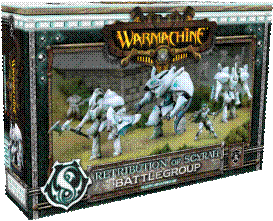 UNLEASH THE POWER OF ELVEN VENGEANCE!

The Retribution of Scyrah has risen out of the secluded elven nation of Ios to eliminate the human sorcery that threatens to destroy their gods. Kaelyssa, Night’s Whisper stalks her enemies with her myrmidons at her side, shrouding them in shadows to cover their advance. The flickering form of the Chimera and fleet Griffon strike suddenly, while the powerful Manticore lays down covering fire before closing with the deadly curved sabers affixed to its arms. This starter box contains quick start rules and a complete battlegroup of four plastic models and corresponding stat cards for WARMACHINE, including: •Warcaster Kaelyssa, Night’s Whisper •Chimera Light Myrmidon •Griffon Light Myrmidon •Manticore Heavy Myrmidon 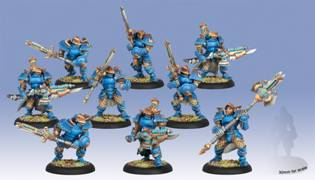 Stormblades are ready to face insurmountable odds and wield the most advanced mechanika Cygnar has to offer. These heavily armored soldiers are each handpicked to become knights of storm. Supplementing ancient martial tradition with state-of-the-art weaponry, in combat Stormblades are surrounded by a nimbus of flashing lightning, a sight that represents a fearsome presage of the future of Cygnaran warfare.

A player may field up to two Stormblade Infantry units for each warcaster in a Cygnar army. Box, plastic. 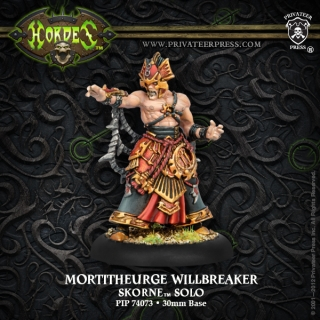 Masters of the powers of death and agony, the mortitheurges known as willbreakers can influence the mind of an enemy soldier as easily as they can control the great beasts of the skorne war host. A soldier who faces a willbreaker knows the roiling fear of uncertainty, that his own weapons might be turned against his friends and allies or he might be forced to lay down arms and placidly accept the blows of the enemy. Few things can terrify a warrior more than the stark realization that his fate is not his own.

A player may field up to two Mortitheurge Willbreakers for each warlock in a Skorne army. Blister, white metal

The Winter Guard make up the majority of the Khadoran military and are found at the core of every garrison and combat force. Their weaponry is practical and places little strain on the Khadoran treasury when produced in bulk. Their short-ranged blunderbusses fire a heavy slug that packs a powerful punch, particularly when these infantry concentrate their fire.

A player may field up to three Winter Guard Infantry units for each warcaster in a Khador army. Box, plastic. 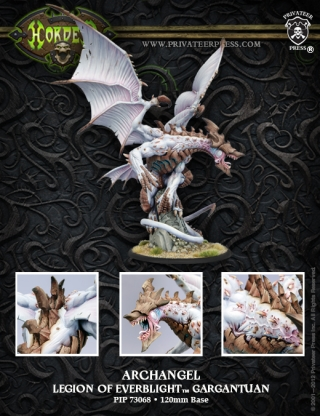 Everblight still dreams of the time when he took to wing and spread death like a god; now his longing has been made manifest in the archangel. His most perfect spawn, the archangel courses through the sky and unleashes gouts of flame to spread across the earth. It scorches the enemies of its master, coming to ground only to feast upon those who would defy him. Where the archangel goes, so goes Everblight’s legion—and with it, the future Everblight envisions.

A player may field up to two Archangels for each warlock in a Legion army. Box, resin and white metal.

Posted by ACD Distribution at 3:12 PM